Most of our readers know what a plinker is. For those who are new to the shooting sports, “plinker” refers to a rifle or handgun, typically chambered in .22 caliber, and often used for recreational shooting and informal target practice, such as at tin cans for instance, which make a “plink” sound when hit (hence the name “plinker”). There are many guns that make good plinkers, and this series of articles looks at some of the most popular .22 handguns among them. The first five articles in the series may be found here, here, here, here and here.

In far northern Italy, near the Swiss border, the Alpine waters of the Mella River run through the Val Trompia, a valley in the Columbine Mountains. The region’s soil is rich in iron ore, and in 1526 Bartolomeo Beretta capitalized on that resource by building a forge in the valley town of Gardone and producing gun barrels. Today, the Beretta family is still in the firearms business, making their company  –Fabbrica d’Armi Pietro Beretta–   the oldest and longest-running gun manufacturer in the world. The family’s first handgun, an automatic, debuted in 1915, and with it the open-top slide that has been a hallmark of Beretta pistols ever since. From then until now, Beretta pistols have seen service, officially and otherwise, in almost every transnational conflict of the past hundred years, culminating most recently with the M9 adopted by US forces in 1985.

Designed for the civilian market, the 70 series pistols were essentially improved versions of the model 1934 that served the Italian military from the mid-1930s to the early 1950s. Chambered in .32 ACP and .380 ACP the 1934 was a simple and reliable design, and in 1958 Beretta updated it and called the new pistol the model 70. Other than its sleeker, more modern appearance, the model 70 also introduced a manual slide stop and a button-style magazine catch, replacing the model 1934’s heel catch.

A total of seven models comprised the series, from the model 70 to the model 76. The first of these, the model 70, was an all-steel pistol that was offered in .22 Long Rifle, .32 ACP, and later in .380 ACP. It was slightly under five inches tall, sported a 3.5” barrel and plastic grips, and the magazine (for either .22 or .32) held 8 rounds. It weighed about 24 ounces, and like the earlier model 1934 quickly gained a reputation for reliability. It was also available with a threaded barrel and a suppressor. These two options, along with its reputation for reliability, caught the attention of Israel’s Institute for Intelligence and Special Operations (“Mossad”) whose counter-terror unit, the “Kidon”, is known to have used the model 70. Additionally, in 1969 it became public knowledge that agents of Israel’s Security Agency (“Shin Bet”) also carried the model 70, after press reports of an attempted hijacking of an El Al flight at Zurich international airport. One of the four Palestinian hijackers was shot and killed with a model 70, chambered in .22, wielded by Shin Bet agent Mordechai Rahamim. This incident, and other similar uses of the model 70 in the years that followed, cemented the little gun’s reputation as a clandestine-service weapon.

Over the 27 years of their production, the 70 series pistols saw various options, modifications and improvements, and all except the model 70 were chambered only in .22 Long Rifle. The second iteration, the model 71, like the four models that followed it, had an aluminum alloy frame, which, when equipped with the 3.5” barrel, reduced the weight from 23 to 17 ounces. The 3.5” barrel was not the only option however, as a 5.9” barrel was introduced for the model 72, which was supplied with two barrels: one of each length. The model 73 came with a taller frame (5.3”) which allowed a corresponding increase in magazine capacity from 8 rounds to 10, and was offered with either barrel length. The model 74 was like the 73, but came with the long barrel only, and adjustable sights. The model 75 saw a return to the shorter frame, and came only with the long barrel. The final iteration in the series, the model 76, was a dedicated all-steel target pistol that weighed in at 33 ounces. It had the tall frame and long barrel, and a fixed barrel shroud, separate from the slide, to provide both additional weight and a continuous single-level rib on which the sights were mounted. It was also the only model in the series to be offered with wooden grips. Early guns in the series, called the Type I design, had a cross-bolt safety. Type II features, introduced at various points in the 1970s, included a 1911-style safety lever on the left side of the frame, deeper grips with a left-side thumbrest, and a magazine disconnect.

I have owned three of the 70 series pistols (none of them a model 76), all chambered in .22, and I can attest to their reputation for reliability. This is one aspect of Beretta’s signature open-top slide that is more than merely cosmetic: I’ve never had an empty case stovepipe when ejecting. As long as the slide cycles far enough back for the ejector to strike the case, there will not be an ejection hang-up. Additionally, the 70 series pistols do not appear to be finicky eaters. I have shot mine with a wide variety of ammunition, and had very few failures to feed. Trigger pulls have been consistent and easy to master, and with both barrel lengths the accuracy has been surprisingly good for a sport/recreational type pistol. Produced in the hundreds of thousands over a quarter century, the Beretta 70 series pistols have earned their place as classic plinkers. 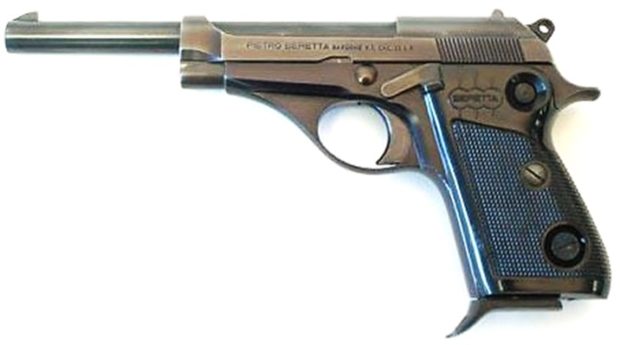 Jim Krieger is a firearms writer who lives in Texas.