Early Saturday morning, a employee at the Hawaii Emergency Management Agency pressed the wrong button on his computer and sent an imminent missile attack alert to the residents of the state. The alert informed unsuspecting people that there was a real-life missile inbound for Hawaii.

The mistake was corrected, but after much panic and terror from the public.

However, the false alarm was not the only button pushed that day. Actress Jamie Lee Curtis took her frustrations out over the ordeal on a familiar target: Donald Trump. In a tweet after the missile alert, Curtis blamed Trump for the panic saying  “Shame on your hate filled self. YOU DID THIS!”

She also called Trump immature and an idiot.

This Hawaii missle [sic] scare is on YOU Mr. Trump. The real FEAR that mothers & fathers & children felt is on YOU. It is on YOUR ARROGANCE. HUBRIS. NARCISSISM. RAGE. EGO. IMMATURITY and your UNSTABLE IDIOCY. Shame on your hate filled self. YOU DID THIS! 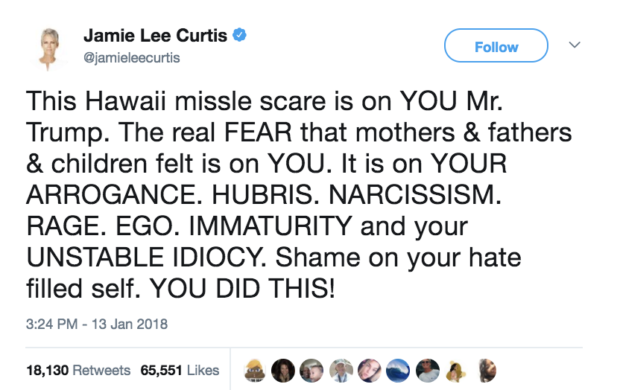 “The President has been briefed on the state of Hawaii‘s emergency management exercise. This was purely a state exercise.”

Trump has been vocal in his brinksmanship with North Korean dictator Kim Jong Un over his nuclear program in recent days.