Eighty-one senators voted to reopen the federal government Monday afternoon, handing President Trump and the Republicans a big win. Democrats in the Senate let the government shut down the over Republicans not including permanent legalization for illegal immigrants who came to the U.S. as minors in a spending bill.

The government shutdown withheld payment for armed service members and military families whose sons or daughters died in combat. The blame for the shutdown was swiftly turning on the Democrats, and their leaders agreed to a deal to open the government on Monday

However, eighteen senators voted to continue to keep the government closed. A large portion of that group has 2020 aspirations. Cory Booker, Kamala Harris, Bernie Sanders and Elizabeth Warren all voted to continue the shutdown. The odds-makers all list the above democrats as favorites to run in 2020.

The full list of senators who voted ‘No’ on the bill passage: 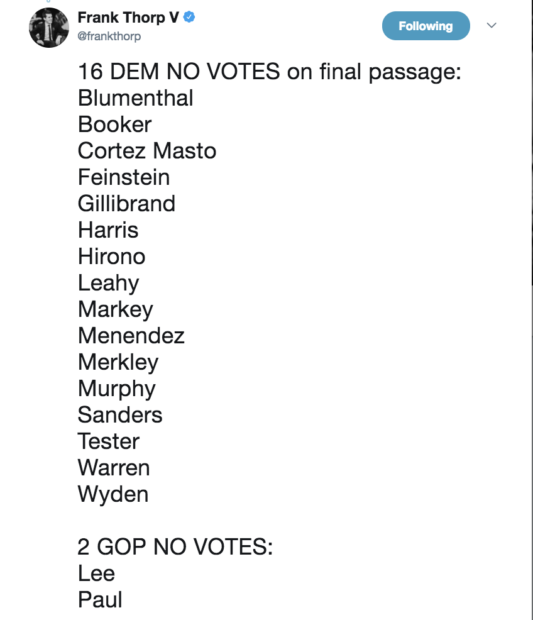 After the vote to reopen, Trump said in a statement:

I am pleased that Democrats in Congress have come to their senses and are now willing to fund our great military, border patrol, first responders, and insurance for vulnerable children. As I have always said, once the Government is funded, my Administration will work toward solving the problem of very unfair illegal immigration. We will make a long-term deal on immigration if, and only if, it is good for our country.