“These phones suck as much as they do because of the program we use to capture texts, full stop,” Page, an FBI lawyer, said in an Aug. 2016 text message highlighted by Wisconsin Sen. Ron Johnson, the chairman of the Senate Homeland Security and Governmental Affairs Committee.

In a letter to Rosenstein, Johnson signaled that he is expanding an investigation into current and former FBI officials’ use of non-government phones and email accounts.

Johnson’s investigation is running parallel to one being conducted by Justice Department Inspector General Michael Horowitz.

Horowitz uncovered texts between Strzok and Page showing that they frequently expressed anti-Trump and pro-Clinton bias while working on both the Russia investigation and Hillary Clinton email probe. (RELATED: Source: Strzok Hadn’t Seen Evidence Of Collusion 10 Months Into Russia Investigation)

Horowitz’s investigation has been hindered by a glitch that hit thousands of FBI-issued Samsung 5 phones — including those used by Strzok and Page — in 2016 and 2017.

Last month, the Justice Department revealed that the FBI “failed to preserve” text messages that Strzok and Page exchanged between Dec. 14, 2016 and May 17, 2017, a crucial period on the Russia investigation. (RELATED: FBI ‘Failed To Preserve’ Five Months Worth Of Texts Between Anti-Trump Agents)

Several days after that disclosure, Fox News reported that “thousands” of FBI-issued phones were affected by a glitch which prevented the devices from backing up text messages.

Johnson’s letter raises questions about the glitch and whether the FBI faced “broader record-retention issues” with agency phones. He also asks whether FBI employees sought to procure iPhones.

The Aug. 2016 messages show that Strzok and Page — who were having an affair at the time — discussed the FBI’s text message archiving system as well as FBI policy regarding records retention. 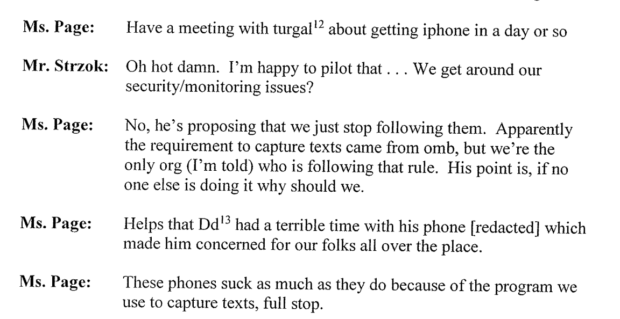 Page told Strzok that she was set to have a meeting with “turgal” — likely James Turgal, the executive assistant director for the FBI’s Information and Technology Branch — to discuss getting an iPhone.

“We get around our security/monitoring issues?” he asked.

Page responded: “No, he’s proposing that we just stop following them.”

She then said that the requirement to capture text messages was set by the Office of Management and Budget but that the FBI was the only agency following the rule.

“His point is, if no one else is doing it why should we,” Page wrote of Turgal, whose records are also being sought by Johnson.

Page added that Andrew McCabe, who just stepped down as deputy director of the FBI, also had problems with his phone. The issues “made him concerned for our folks all over the place.”

“These phones suck as much as they do because of the program we use to capture texts, full stop,” Page said. 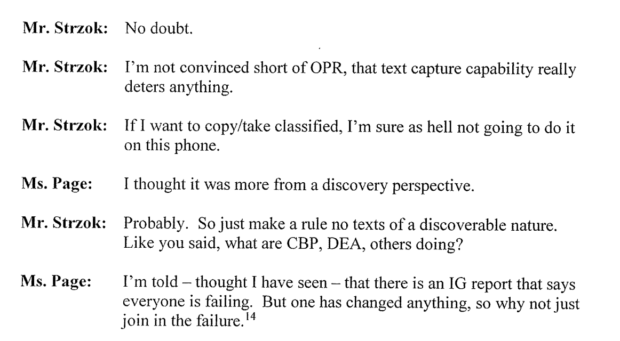 He then said that he doubted that bureau’s text archiving system “really deters anything.”

Strzok and Page then expressed different views on the purpose of the FBI’s archiving system. Strzok, the counterintelligence agent, appeared to view it as a deterrent against taking classified information. Page, the lawyer, viewed it in terms of legal discovery.

“If I want to copy/take classified, I’m sure as hell not going to do it on this phone,” Strzok wrote.

“I thought it was more from a discovery perspective,” said Page.

“Probably. So just make a rule no texts of a discoverable nature,” he wrote, cryptically.

As with many of Strzok and Page’s text messages that have been made public, the full context of their exchanges is not entirely clear. It is not clear if Strzok and Page were discussing ways to get around the FBI’s archiving system or merely venting about its flaws.

At the time of the Aug. 2016 exchange, Strzok’s FBI-issued Samsung 5 had been delinked from the bureau’s computer servers for two months.

No evidence has emerged showing that Strzok or Page took any steps to avoid having their text messages archived.

In his letter, Johnson also pointed to evidence that Strzok and Page used Gmail for government business.

In an April 10, 2016 exchange in which Strzok told Page that he “Gmailed” two drafts of a document that he had sent to FBI counterintelligence chief Bill Priestap.