CNN national security analyst Juliette Kayyem said the U.S. is the only nation in the world where children are the target of gun violence.

“Yet again, you cannot have these conversations with at least saying every time, we are the only nation that has this kind of violence, and presumably gun violence, obviously, in particular, focused on our children,” Kayyem told CNN anchor Brooke Baldwin.

“It is just ridiculous,” she continued. “It’s like no other country lives or allows themselves to live. Here we are, another time, having a discussion about guns as being a security issue for our children.”

The statement that America is the “only nation” where gun violence targets children appears to be incorrect. A shooting at a school in Britain in 1996 killed 16 children. Germany experienced two school shootings, one in 2002 and another in 2009, according to the Washington Post.

Here are the deadliest mass shootings around the globe since the 1980s according to the Post: 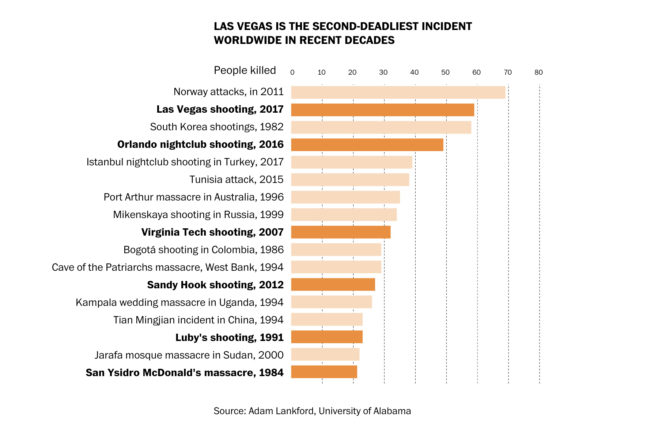 After Kayyem’s comment, Baldwin recalled how a young girl on her show recently wrote the president asking how he will keep children safe:

I was just talking to a 7-year-old on my show this week who lost her 6-year-old friend at a school shooting in South Carolina. She wrote a letter to the president, and I couldn’t have put it better, the 7-year-old said, “Mr. President, how are you going to keep children safe in this country?”

The gunman was still at large as the comments were being made on air.

1
Armed Citizens Stand Guard Against Looters In Minneapolis
US
2
A Soldier Stopped A Shooting By Running Over The Gunman With His Car: 'I Wasn’t Necessarily Frightened'
Military
3
'If Anybody Needs To Be Fact-Checked, It's The Media': Kayleigh McEnany Unloads On Jim Acosta
Media
4
George Floyd Protesters Attack Old Woman In Wheelchair While Looting
US
5
Trump's Approval Rating Achieved Something Unprecedented. Here's What It Means For November
Analysis