The 4th U.S. Circuit Court of Appeals ruled Thursday that President Donald Trump’s latest round of travel sanctions is likely unconstitutional because it is driven by animus toward Islam.

The ruling will not have immediate effect, as the Supreme Court preemptively enjoined the 4th Circuit’s decision in December 2017. The justices will hear a challenge to the latest travel ban this spring, and allowed the Trump administration to enforce most of the sanctions while legal challenges are resolved.

The full 4th Circuit, the federal appeals court based in Richmond, Va., upheld a lower court injunction against the ban on a 9-4 vote. Chief Judge Roger Gregory wrote the court’s main opinion, explaining that the government’s stated rationale for the policy differs from its true intent.

“Plaintiffs here do not just plausibly allege with particularity that the proclamation’s purpose is driven by anti-Muslim bias, they offer undisputed evidence of such bias: the words of the president,” he wrote.

As in its previous ruling on the matter, Gregory said the proclamation leaves “reasonable observers” with the impression that the government’s real purpose is to disparage Muslims, in violation of the Constitution’s ban on favoring one religion over another. He gestured toward the president’s own public statements, suggesting they reveal hostility to Islam.

Gregory dedicated a full page to such examples: 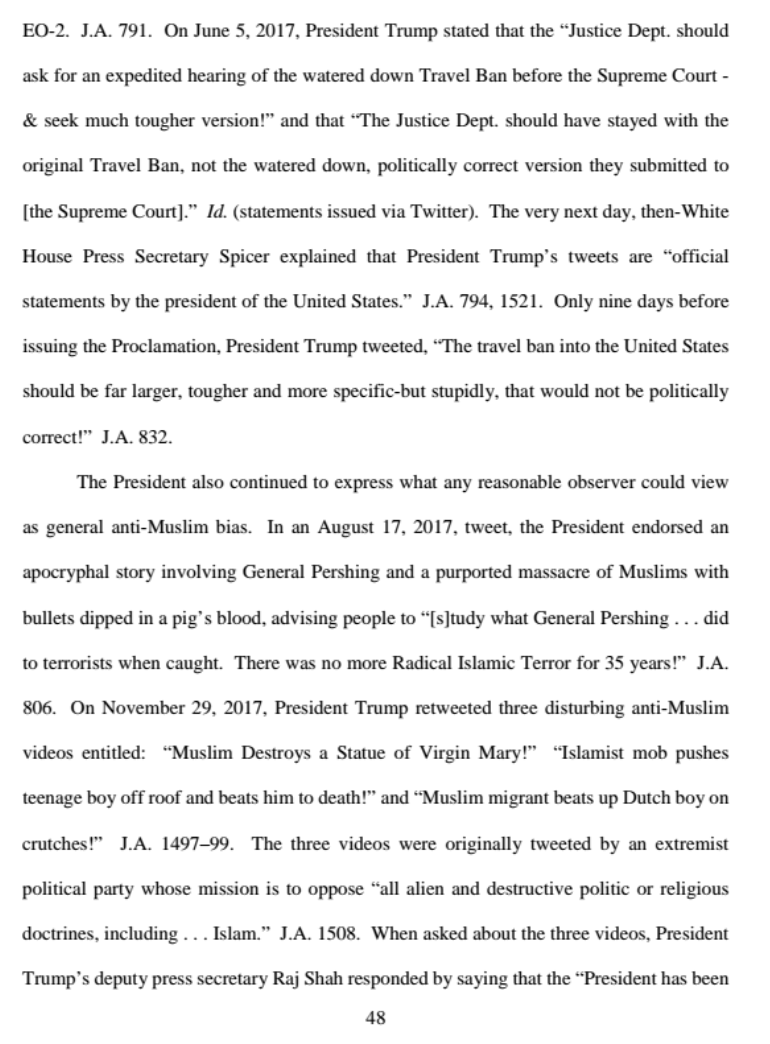 The statements he cited were made in connection with an earlier version of the travel ban, but Gregory argued those comments continue to infect its subsequent iterations.

“Because ‘reasonable observers have reasonable memories,’ these statements certainly provide relevant context when examining the purpose of the proclamation,” he wrote.

“This case involves a [federal] court’s bold effort to second-guess U.S. foreign policy and, in particular, the president’s discretionary decisions on immigration, implicating matters of national security,” he wrote. “Our constitutional structure forbids such intrusion by the judiciary.”

Judge William Traxler, a Bill Clinton appointee who voted to bar enforcement of earlier versions of the ban, joined the dissenters in this case. Traxler said that the latest restrictions should not be analyzed in light of Trump’s past statements, because they were the product of a broad and impartial interagency process.