Hillary Clinton tweeted out a misleading statistic in the aftermath of the deadly school shooting this week in Florida.

Clinton tweeted a claim that there have been “over 230” school shootings since the Sandy Hook shooting, which occurred in 2012. The statistic comes from the gun control group Everytown. 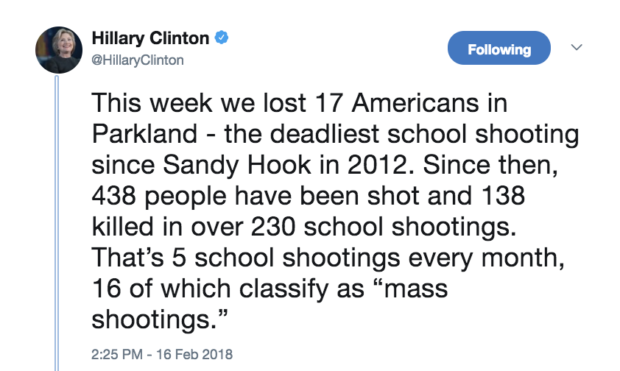 The statistic is misleading because it lumps in the discharge of all firearms in or around a school in that time period. The accidental discharge of legal firearms, shootings where no one was injured or present at the school and suicides all are included in the statistic. There have been 25 fatal school shootings since Columbine.

The Washington Post critiqued the “dubious” claim this week, along with the misleading statistic that there have been 18 school shootings in 2018.

“Since 2013,” the organization says on its website, “there have been nearly 300 school shootings in America — an average of about one a week.”

But since Everytown began its tracking, it has included these dubious examples — in August 2013, a man shot on a Tennessee high school’s property at 2 a.m.; in December 2014, a man shot in his car late one night and discovered the next day in a Pennsylvania elementary school’s parking lot; in August 2015, a man who climbed atop the roof of an empty Texas school on a Sunday morning and fired sporadically; in January 2016, a man in an Indiana high school parking lot whose gun accidentally went off in his glove box, before any students had arrived on campus; in December 2017, two teens in Washington state who shot up a high school just before midnight on New Year’s Eve, when the building was otherwise empty.

Just five of Everytown’s 18 school shootings listed for 2018 happened during school hours and resulted in any physical injury. Three others appeared to be intentional shootings but did not hurt anyone. Two more involved guns — one carried by a school police officer and the other by a licensed peace officer who ran a college club — that were unintentionally fired and, again, led to no injuries. At least seven of Everytown’s 18 shootings took place outside normal school hours.

Seventeen people were killed in the shooting in Florida, which occurred on Valentine’s Day this week.