Dinesh D’Souza tweeted about survivors of the high school shooting in Parkland, Fla. Tuesday, and what he had to say sent Twitter into a frenzy. 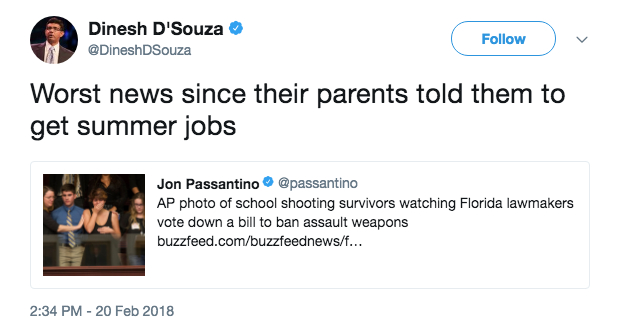 Dinesh D’Souza has never not been an unbelievable piece of shit but mocking a bunch of kids who just survived a mass shooting is something else entirely.

dinesh d’souza has no humanity.

How evil do you have to be to tweet this about kids who got shot at in school less than a week ago. pic.twitter.com/MkwkJNYs1i

These kids just watched their classmates get gunned down and Dinesh is cracking jokes about how they’re entitled? Conservatives need to denounce this crap. Sick people.

I think you mean Adults 1, Kids -17, you horrible excuse for a human being https://t.co/2VxNopI0zl