Mike Rowe shared his thoughts on the recent tragedy at Stoneman Douglas High School, and it will blow anything the establishment media has to say out of the water.

Rowe wrote on Facebook, “Evil is real. As long as humans have walked the earth, people have chosen to do evil things. This is what happened in Florida. A nineteen-year old man chose to do an evil thing. He planned it. He executed it. He succeeded.”

Rowe also said that while it’s important to find out the contributing causes of mass shooters, we shouldn’t absolve the killer of responsibility for his actions.

“Should we endeavor to know why? Absolutely. Should we discuss the impact of video games, accessible firearms, single-parents, no parents, powerful medications, social media, mental illness, bullying, or anything else we think might have encouraged him to choose evil over good? Without question.”

“But we should also stop confusing the influence of such things, with the root cause. Because nothing in this man’s past can possibly explain his decision to kill seventeen people,” Rowe added.
“If you believe otherwise, ask yourself why millions of other people with a similar past, don’t make similar choices.” 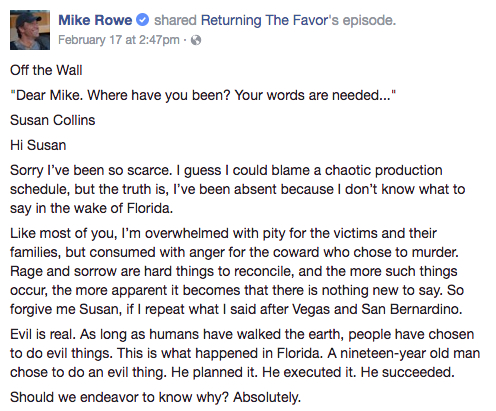 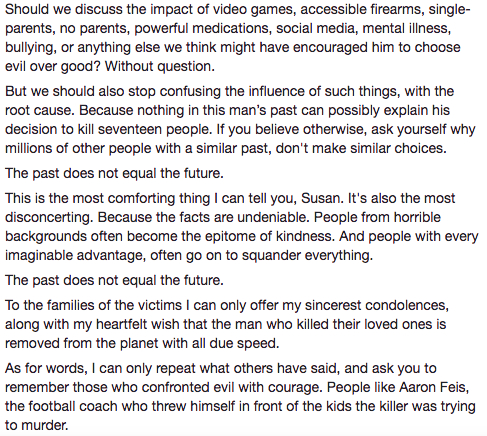 The suspected gunman was 19-year-old Nikolas Cruz, a former student who was expelled from the school.

He was reportedly “involved in a YouTube chat room conversation about bombs or building bombs,” and his former classmates said that he complained about bullying. (RELATED: Here’s Everything We Know About The Florida High School Shooting Suspect)

The FBI was warned about Cruz last month, but did not act on the tip. (RELATED: The FBI Keeps Missing Mass Shooters Before It’s Too Late)