Michael Barbour knew he had to do something after watching footage of the high school shooting in Parkland, Florida, and it turns out that “something” he settled on is exactly what teachers wanted.

Barbour is the owner of Top Gun Shooting Sports in Taylor, Michigan. His shooting range and gun store is a favorite in the community. “When the idea of arming teachers was floated by the President, I saw so many people coming out against it, saying teachers did not want it,” Barbour told The Daily Caller, “I thought I’d do my part and just offer some free classes.” 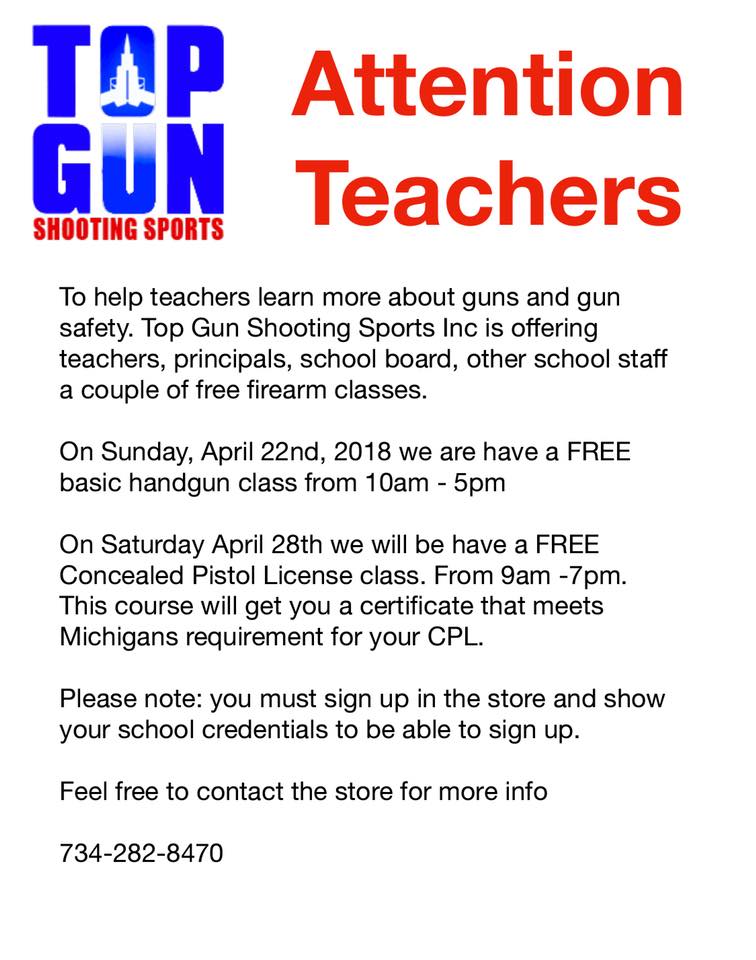 Barbour said he was expecting to fill one or two classes, approximately 20 teachers. As soon as his offer was put out, the response from teachers was “overwhelming.” “People started signing up within minutes,”Barbour  says, “390 spots were filled in 10 days.We’ve been overwhelmed with the response.” Barbour says teachers will show up by the carload and drive from over three hours away for his gun safety and handling classes.

Top Gun Shooting Sports has had to offer many more courses to keep up with the demand from teachers.

Barbour says the classes teach basic firearm safety and involve the teachers engaging in live fire on a shooting range. Barbour says some of the teachers are nervous to fire a gun for the first time but eventually get the hang of it.

“Some of the teachers are very experienced,” Barbour says, “They’re excellent marksmen.”

Barbour tells the Daily Caller that the idea that teachers don’t want to carry guns is “extremely false,” and that it’s not just teachers getting trained.  “We’ve had school maintenance people, bus drivers, lunchroom staff,  special education staff and  administrators show up to learn how to shoot,” he says.

You’re not allowed to carry a firearm on school property in Michigan, but this law is not stopping the teachers from learning how to handle a firearm. “My whole goal is to make teachers more friendly to firearms,” Barbour says, “So if they ever pass a law to allow school carry, the teachers will be ready.”

The White House has not backed down on their push to promote more trained teachers in schools across the country. President Trump personally said he wanted to arm up to 20% of school staff across the country. The more outspoken voices for more gun control in the country decry the idea.

Barbour says the teachers often get emotional after the trainings, thanking him and his staff for the support. “They tell me they would do anything to make sure their kids get home safely.”