In the wake of Donald Trump Jr.’s divorce this week, a former model named Melissa Stetten has tweeted that he sent her racy private messages in November 2011, just weeks after the birth of his child, Tristan.

However, the former model has a history of fabricating tall tales.

“Surprised his marriage didn’t work out since he was sending me DMs a month after his wife gave birth,” wrote Stetten, captioning a purported screenshot of Trump Jr.’s private message on Twitter.

Surprised his marriage didn’t work out since he was sending me DMs a month after his wife gave birth. (I tweeted a joke about pulling a muscle changing a tampon and he replied asking if I smelled bacon? Cool joke) pic.twitter.com/JbuwC1wghf

The 33-year-old Stetten told People that the DM appeared shortly after she tweeted a “joke about pulling a muscle changing a tampon,” and he publicly replied to her asking if she’d smelled bacon—a reference to an earlier joke he made about having a “bacon fetish.” Writing on Twitter, Stetten referred to Trump Jr. as a “creep” who “hit on” her.

Despite Stetten’s description of Trump Jr. as a “creep,” Stetten told People that she had initially responded to his public tweet about bacon by writing, “@DonaldJTrumpJr soaking my body in bacon today.”

He replied: “now you’re just toying w my emotions. Why don’t women come up w bacon perfume? Seems so much better than that channel crap,” and added that he was a happily married man.

Speaking to People, a spokeswoman for Trump Jr. provided the full thread of the DMs, showing that the exchange was understood as a joke by both her and the President Donald Trump’s oldest son.

In the DMs, Stetten replied: “Haha. People are such dummies! We’re hilarious :-).”

“Agreed,” wrote Trump Jr. in his final DM to her. “Amazing how people take shit. No sense of humor.” It was the last tweet he sent her. 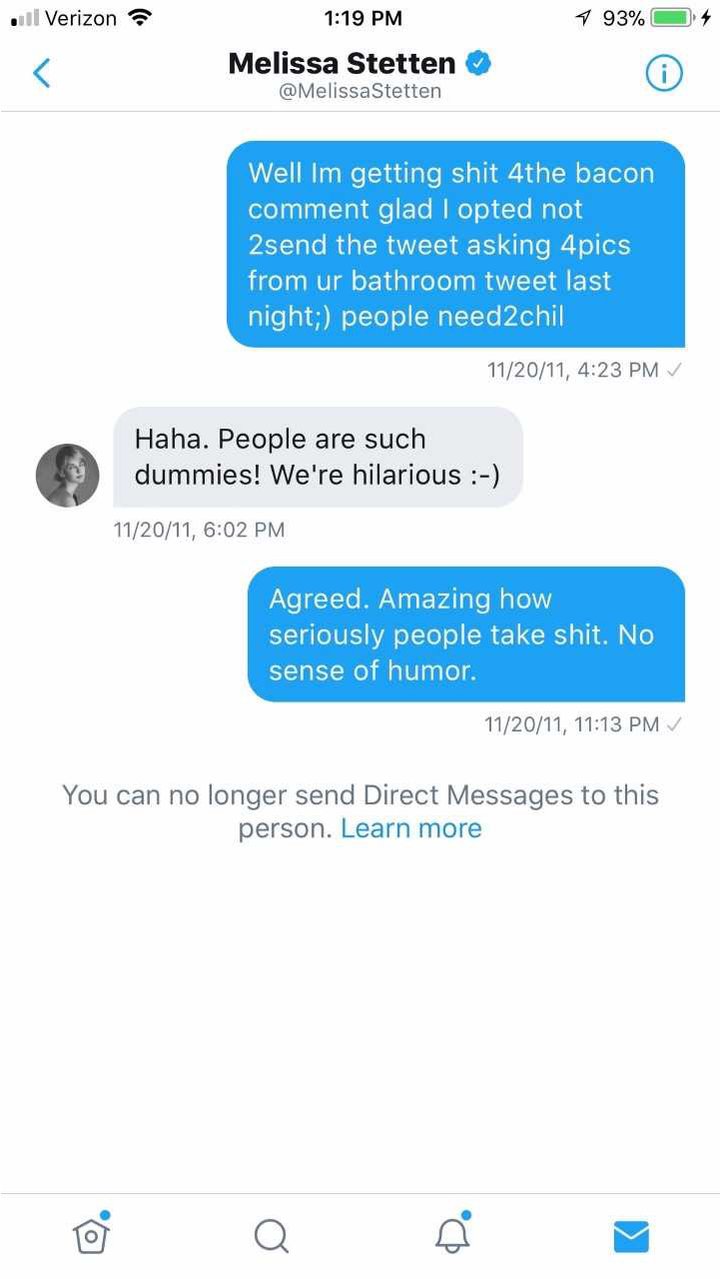 The private message thread shared by Trump Jr. greatly differs from Stetten’s screenshot, adding additional context to the conversation. She did not share the full extent of her correspondence with Trump Jr., presenting only his initial message to her, insinuating that his message arrived unsolicited.

This isn’t the first time Stetten has omitted details from her claims about married men. In 2012, Stetten became the subject of controversy after she unleashed a lengthy barrage of tweets accusing married actor Brian Presley of flirting with her on a plane. She shared a picture of him sleeping in his seat next to her.

“I love that I took a red eye flight to NY, had a 10 minute friendly conversation with the person sitting next to me, had some food, and went to sleep!” Presley wrote on Facebook, denying Stetten’s version of the incident.

“I learned today this person has been tweeting about me drinking beer in the airplane bathroom, and trying to commit adultery with her on the airplane. Really absurd and quite funny! … They Even took pictures of me while I was sleeping.”

Following the actor’s denial of the incident, the Daily Mail investigated her claims and found that she appeared to have a “prolific history of lying.”

In a now-deleted post on her personal blog, Stetten admitted to fabricating lies at least twice over a three month period using Twitter. On March 30, 2012, the former model posted a photoshopped image of two Mega Millions tickets on Twitter, claiming that she won the lottery. She also admitted on her blog that she often lies about her age to casting directors when auditioning for roles.

In 2014, Stetten, who once dated radio personality Anthony Cumia, blamed him for losing her writing gig at feminist blog xoJane. She was fired after readers discovered that she had written a series of racially-disparaging tweets about minorities. In her parting post for the site, Stetten disavowed her remarks, calling them “100 percent racist.” However, she refused to take responsibility for writing them, opting instead to blame Cumia for having his “humor and views” rub off on her, and blamed offended readers for not catching her sense of humor.

In a now-deleted (but archived) WordPress blog post dating to 2012, Stetten accused Cumia of being a pedophile who “fooled around” with young girls and invited them over to his place when she was out of town. Stetten did not substantiate these allegations with evidence and did not repeat these claims in the xoJane post.