Yet another explosion rocked Austin Sunday night after a bomb exploded, sending two men to the hospital.

The two victims were both in their twenties and their injuries were not deemed life-threatening, Austin-Travis County EMS said. They were either riding or pushing bikes when the explosion took place, authorities said.

Austin Police Chief Brian Manley said at a press event early Monday morning that the explosion was the result of a bomb going off, possibly caused by a trip wire.

“We’re coming back to you very early in the morning because we have a safety message that we want to get out into the community as they wake up in the morning and start about their day,” Manley said, just after 1:30 a.m. in Austin.

“So that changes things in that our safety message to this point has been involving the handling of packages and telling this community do not handle packages do not pick up packages do not disturb packages. We now need the community to have an extra level of vigilance and pay attention to any suspicious device, whether it be a package, a bag, a backpack, anything that looks out of place and do not approach it.”

The police chief said authorities were waiting for daylight to make a full assessment about a possible trip wire.

If a trip wire was used in Sunday night’s bombing, Manley noted, that would be a change in method from the first three bombings. He urged residents not to touch any suspicious packages or even go near them.

Nails were found in one of the victim’s legs, KVUE reported.

Police asked families in the residential area where the bombing took place to remain in their homes until an agent came to their front door informing them the neighborhood was safe; Manley said the process would likely take until daylight.

Manley said authorities were clearing a “second item” in the area Sunday night, which he said was a backpack.

Sunday night’s explosion follows three separate package bombs that exploded in the city this month, leaving two people dead and two others injured. Manley said Monday morning that police are operating under the belief that all four bombings are connected.

The first explosion took place on March 2; the second and third explosions took place 10 days later on March 12. In all three of those cases, the package bombs were dropped off overnight on the victims’ doorsteps, authorities previously said.

Authorities had already announced a $115,000 reward for any information leading to the bomber’s arrest before Sunday night’s explosion. The FBI is offering $100,000 and Texas Gov. Greg Abbott’s administration is offering an additional $15,000. Abbott asked the public early Monday morning to help authorities “catch this killer.” 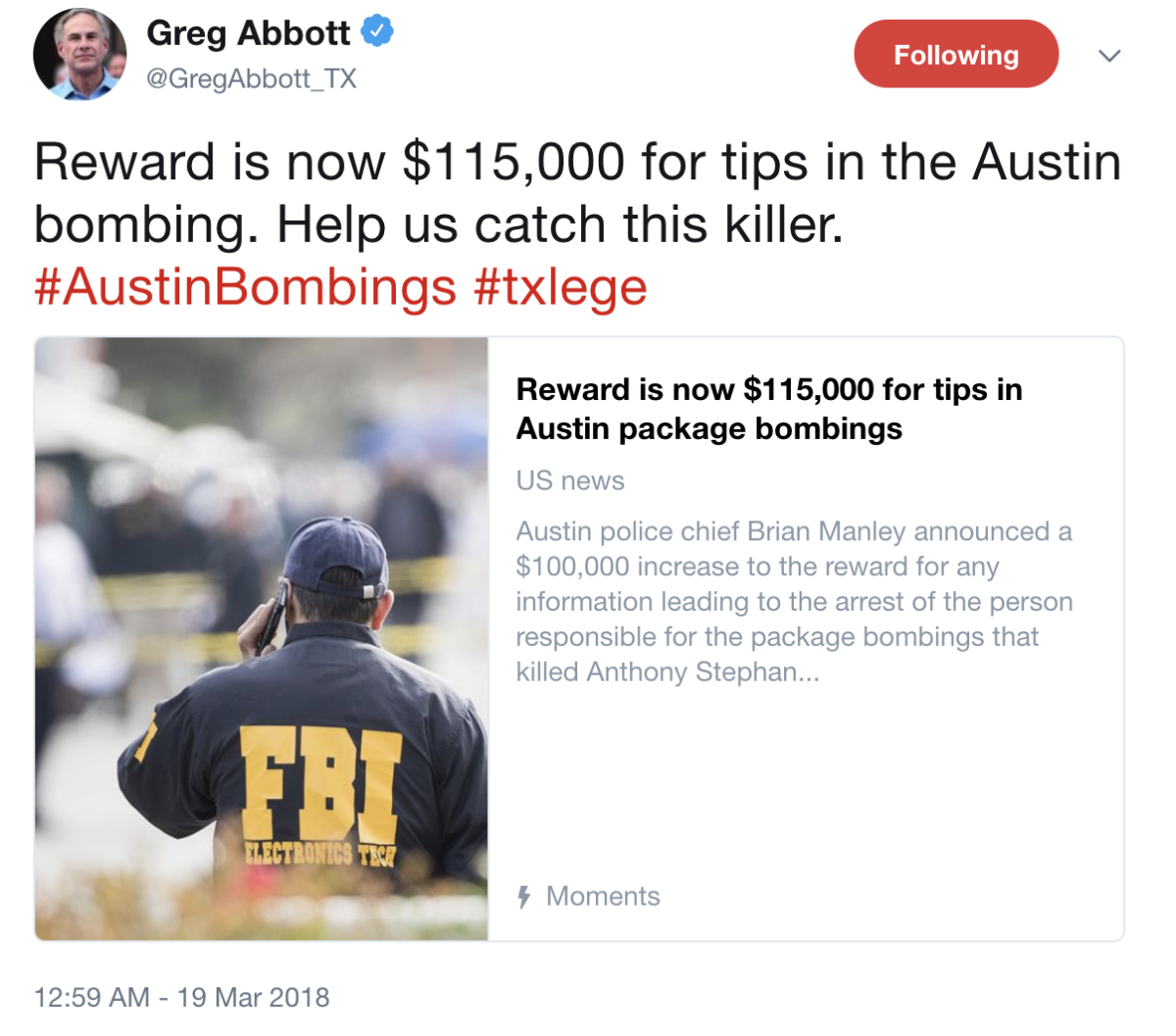 Manley said earlier on Sunday that the three package bombings were “meant to send a message.”

Investigators with the FBI and Bureau of Alcohol, Tobacco & Firearms (ATF) are assisting the Austin Police Department. More than 500 officials between the two agencies are working on the investigation, Manley said earlier on Sunday.

Some Austin schools saw their day-to-day operations impacted by the explosion and subsequent investigation.

Austin Independent School District said in a Facebook post that, due to police activity, school buses would not be able to enter the Travis Country neighborhood. “Any tardies or absences due to this situation will be excused,” the post said

This is a developing story, check back for updates