Google searches for terms like “NRA Membership” spiked during Saturday’s “March For Our Lives” event in Washington D.C. 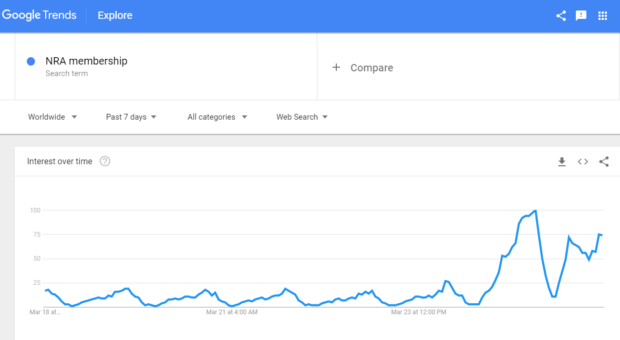 According to Google’s explanation of the numbers to the left of the chart, they “represent search interest relative to the highest point on the chart for the given region and time. A value of 100 is the peak popularity for the term. A value of 50 means that the term is half as popular. A score of 0 means there was not enough data for this term.”

In other words, Saturday’s “March For Our Lives” demonstrated rocketed interest in NRA membership to “peak popularity.”

In fact, membership in the NRA and other pro-gun groups have been spiking ever since the Parkland shooting, as more and more Americans seek to protect their Second Amendment rights.

“Honestly, it’s alright that people are buying more guns,” Hogg said last week. “I just care that they are being safe individuals. And they can practice their Second Amendment rights all they want. I don’t give a f*ck about that. I just want to make sure that a crazy-ass individual doesn’t get an AR-15 or any weapon at all.”