The three targets included the Barzah research and development center in Damascus, Him Shinshar chemical weapons storage facility near Homs, and the Him Shinsar chemical weapons bunker. Marine Lt. Gen. Kenneth F. McKenzie Jr. described the coalition strikes on these targets as “precise, overwhelming, and effective.” He added that coalition forces “delivered a very serious blow” to the “heart” of Syria’s chemical weapons program. 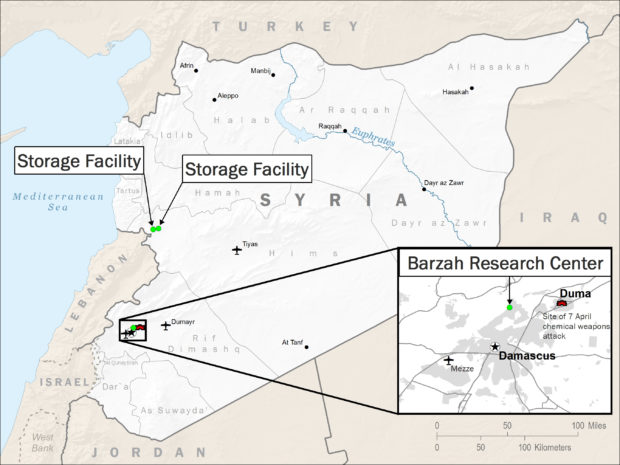 British, French, and American air and naval assets in the Red Sea, the North Arabian Gulf, and the Eastern Mediterranean hammered the above sites with more than one hundred missiles.

This multinational response reportedly “overwhelmed Syrian defenses,” which were primarily employed after the coalition strike had ended. “No Syrian weapon had any affect on anything we did,” McKenzie explained.

The Barzah research and development center was hit with 76 missiles, including 57 Tomahawks and 19 JASSMs. This site, a critical facility for the research, development, and production of chemical weapons, “does not exist anymore,” McKenzie revealed.

The U.S. is “still conducting a detailed damage assessment,” but officials believe the U.S. and its allies “accomplished our objectives,” Mckenzie told reporters.

“The use of chemical weapons anywhere in the world is an inexcusable violation of international law, and the United States will not tolerate it,” White stated clearly in her remarks at the Pentagon.