This past week, the University of Waterloo in Ontario, Canada effectively canceled an event sponsored by the Laurier Society for Open Inquiry (LSOI) by hiking the original security fee of Can$1,600 up to Can$28,500.

The reason administrators gave for the increase was negative “community response.” The event featured Dr. Ricardo Duchesne, professor of sociology and author of “Canada in Decay: Mass Immigration, Diversity, and the Ethnocide of Euro-Canadians,” and Faith Goldy, a far-right independent journalist whose previous talk at Wilfrid Laurier University (also organized by LSOI) was shut down last month after a protestor unlawfully pulled the fire alarm.

In response to the Duchesne-Goldy event, Kitchener-Waterloo Against Fascism organized a protest they called “Rally Against White Supremacists in Waterloo.” And the university’s Indigenous Students’ Association petitioned the administration to “protect” its students and refuse Faith Goldy and Dr. Ricardo Duchesne a platform. The hashtag “#NoNazisAtWaterloo” briefly picked up on social media before the event was officially canceled due to the exorbitant security costs. Once the Laurier Society for Open Inquiry announced the cancellation of the event, many people who opposed it went to Twitter to celebrate the censorship.

Well, it turns out that threatening to protest actually gives the university an excuse to charge nazis 28k in security expenses. So… guess who is no longer speaking. lol

The use of the heckler’s veto and the threat of violent disruption of speech is nothing new. It is rather new, however, that so many organizations and venues are folding to both the use and threat of the veto and the associated threat of adjacent violence.

This past winter, Norwegian black metal band Taake had to abruptly cancel its North American tour because of threats of violence originating from members of Antifa. (RELATED: Antifa Is Violently Threatening Norwegian Heavy Metal Bands Now)

Taake is a band with a 25-year history which has toured the United States (and even Israel) in the recent past. However, this time around Antifa members (who falsely labeled the band as “Nazi”) went on an aggressive campaign to reportedly threaten the venues, fans and workers would be at the band’s performances.

As one post (new removed) from “Kansas City Revolutionary Collective” (an Antifa social media account) stated, “The scumbags at the Riot Room have invited notorious nazi (sic) metal band Taake to Kansas City. We call on all area antifascists to show up the night of the show p***ed and ready to send a message to the Riot Room and any other venue that might consider booking nazi acts, that if you bring Nazis to our city you will get f**ked up. Come out on Saturday, March 31 at 7pm to the Riot Room, prepared with masks, sticks, shields and whatever else you might need to make Taake, their fans and enablers fear for their safety. Enough with nazi metal bands, enough with the Riot Room and their nazi apologia. Death to fascists!” 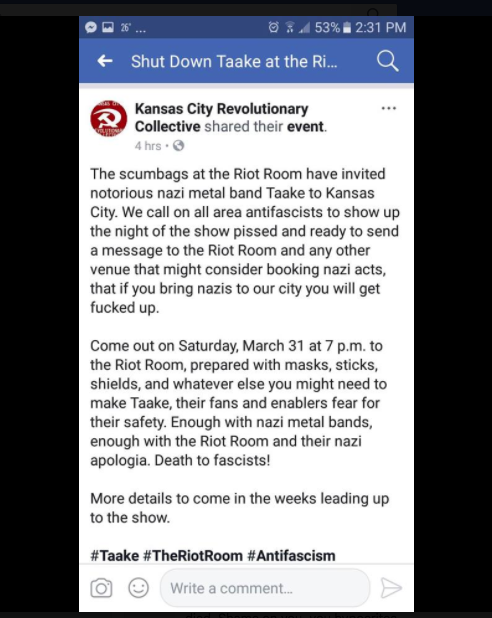 The Riot Room, and many other venues (who were similarly threatened) cancelled the event. Many of these venues were weary of the violent threats from a known radical entity comfortable with the use of physical force and the potential costs incurred stemming from the violence. These music venues claim to promote art and painfully few would admit they act as censors, yet the reality is that they are, with chilling effects across the greater live music landscape.

Closer to home in academia, the heckler’s veto has been successfully utilized in speaking events at many institutions including DePaul University and Lewis and Clark University. In fact, a number of individuals have celebrated the successful use of the heckler’s veto. The Toronto Star’s race and gender columnist, Shree Paradkar, wrote an article with the headline “Faith Goldy’s talk at Wilfrid Laurier was cancelled. And a damn good thing, too.”

What has significantly changed in recent months is that this latest incarnation of the heckler’s veto does not necessarily come in the form of heckling or merely the threat of violence at an event. It now more often comes in the form of excessive security fees to prevent an event from ever happening. This has been become common at universities and is a way for these institutions to mask their displeasure with the content or disposition of the speaker.

Are you a venue that doesn’t like Faith Goldy but still want to make it seem like you wish to protect free speech and are against censorship? Simple. Just charge excessive security fees — and maybe make fee hikes very last minute. Crisis averted, right? We know that many university administrators will experience pushback for preventing a talk based on content, and maybe even for threats of violence. The use of excessive security fees, however, gives universities an “out” for shutting down speech without actually “shutting it down.” And it should be of little surprise that many of these speakers being shut down are those on the right, who are held in extremely low regard and general disgust amongst the vast majority of university administrators who unabashedly lean left and label themselves as “progressives” or “social justice warriors.”

While many universities in the United States have found ways to deal with security concerns in an appropriate and economically viable fashion, many still hide behind the fees. Thankfully though, many are fighting back. The University of Washington’s College Republicans sued the university this past February over a $17,000 security fee planned for a talk by the leader of Patriot Prayer, Joey Gibson.

Institutions like the private Franklin & Marshall College have adopted (or closely adapted) the Chicago Statement demonstrating a commitment to free speech on campus. In just this past year Franklin & Marshall has hosted talks from very public and very polarizing figures as such Jeffrey Lord and Jasbir Puar without incident. Princeton and Georgetown are other adopters.

We can only hope that universities like Waterloo and Laurier can look to these institutions that facilitate the expression of ideas and open discourse. The reality is that students and community members truly experience the ability to develop and grow when they are allowed to actually engage in dialectics, challenging art and open debate. Institutions, both public and private, need to dig in and stop allowing themselves to be controlled by violent mobs.

Who knows what these mobs will demand next.

Jeffrey S. Podoshen is associate professor of business, organizations and society at Franklin & Marshall College in Lancaster, Pennsylvania where he is chapter president of the AAUP (American Association of University Professors). He is also a member of Heterodox Academy.

Lindsay Shepherd is a master’s student at Wilfrid Laurier University, Ontario, Canada and president of the Laurier Society for Open Inquiry.