The outspoken and often erratic Reines shared a story about how Don Jr.’s wife, Vanessa, once dated a member of a Latin street gang. Reines claimed that Vanessa Trump fantasized about the man when she was with Trump Jr.

“Vanessa being with a Latin King must’ve driven you insanely jealous,” Reines tweeted to Trump Jr.

“The machismo, the passion. Tough act to follow,” the top-level Hillary advisor said creepily. “Did you wonder if she fantasized about Valentin Rivera when intimate with you? She did. Every time.”

Reines defended the disgusting remarks in an email to The Daily Caller.

“The Right whining a Tweet about a Trump is mean is comical. So as Sarah Slanders™️ says, the Tweet speaks for itself. For Trumpflakes who spew vitriol but can’t handle it: yes, I bet his wife – who was cheated on while pregnant, just like her father-in-law – fantasized about ex-boyfriends. Or anyone not named Don Jr.” 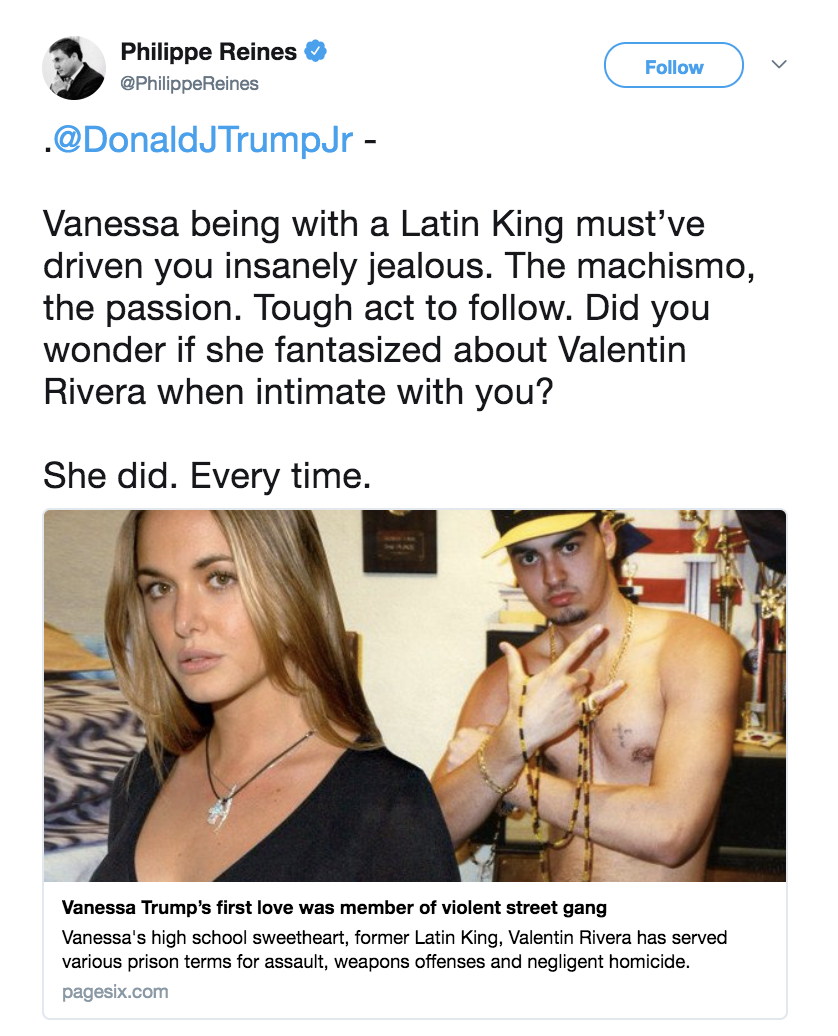 The New York Post reports that Vanessa Trump’s prom date for senior year at her school was a member of the Latin Kings.

“Vanessa — who became part of America’s first family in 2017 as the wife of Donald Trump Jr. — was known at the Dwight School for her bright smile, model looks and outstanding ability on its tennis courts. But on weekends, she drove high school sweetheart Valentin Rivera — who has since served various prison terms for assault, weapons offenses and negligent homicide — to the Lower East Side, where he led meetings of his chapter of the gang.”

Trump filed for divorce from Trump Jr. in March 2018.