Just when you think liberals can’t get any crazier, that they’ve hit bottom, another day passes and you discover they’ve broken out the shovel and started digging … again.

Listen To The Show:

Early this morning, President Donald Trump welcomed home three Americans who have been held captive by North Korea and liberals couldn’t even bring themselves to congratulate him on the accomplishment.

While we celebrate, it’s important to remember that no one should go to North Korea, or Iran, or anywhere controlled by despots. It doesn’t matter what your reasoning is, don’t go! Nothing good will come of it. But we welcome them home, and unlike Democrats, thank the president and Secretary of State Mike Pompeo for securing their release.

The three Americans formerly held hostage in North Korea gesture next to President Donald Trump, upon their arrival at Joint Base Andrews, Maryland, May 10, 2018. REUTERS/Jim Bourg

The confirmation hearing for Gina Haspel to be the next director of the CIA went according to plan, which means mutant liberals in Code Pink shouted for attention and got it. Where were they and the anti-war movement from 2009-2017? They were around; they were just ignored by the media because Barack Obama was in office. Now they’re back to getting media attention.

Kamala Harris, Democratic senator from California and one of the leading contenders for their party’s nomination for president in 2020, loves the sound of her own voice. She much not love accomplishments because she doesn’t have any, but she doesn’t need any to get glowing media coverage because she’s a Democrat.

She tried to force Haspel to condemn enhanced interrogation techniques as “immoral,” because that’s what’s important to the left. Haspel refused to do it, which irritated the hell out of Harris. In her limited time to question Haspel, Harris wasted a good chunk of it being a blowhard. We play the audio and mock Harris because she deserves it.

CNN liberal Phil Mudd even had enough of Harris and her self-righteousness, blasting the senator for her grandstanding and reminding the world that Democrats and Republicans were regularly informed about the enhanced interrogation techniques used on terrorists at the time they were being used and were either “silent or supportive.” Hypocrisy, thy name is Democrat.

Liberal stupidity is not confined to the U.S. In Australia, a lunatic with pink hair is advocating for consent from babies to change diapers, or “nappies,” as they’re called down there. She has the content of soiled nappies between her ears. The audio must be heard to be believed. 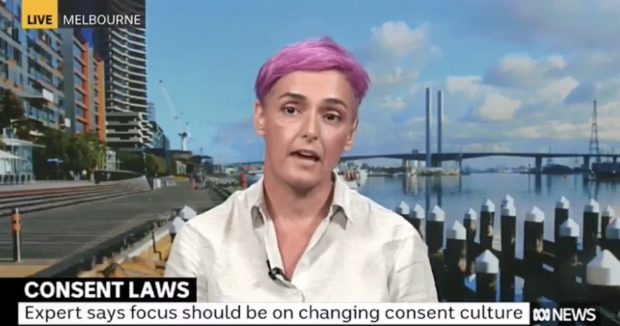 Deanne Carson, advocate for consent from babies to change their diapers. Screen capture from Twitter video

Finally, crazy uncle Joe Biden seems surprised that women “from the hood” were able to learn how to program computers. Of course they can, anyone can. But Biden seems shocked that black women in Detroit were able to learn. If a Republican had said anything close to this, they’d be run out of town. But Biden gets a pass because he’s a Democrat, and he’s not particularly bright.

Give it a listen.

1
Ilhan Omar Calls For The 'Dismantling' Of US Economy, Political System
Politics
2
Ben Shapiro Steps Down As The Daily Wire's Editor-In-Chief
Media
3
'Well That Was Quite The Mic Drop': Harris Faulkner Reacts After Kayleigh McEnany Scolds Reporters
Media
4
Police Fatally Shot A Man In A Parked Car After They Say He Raised A Gun To Officers
US
5
No, Ellen DeGeneres Isn't Dead. But Here's The Reason #RIPEllen Is Trending
Entertainment