Michael Avenatti’s coffee chain fired a top-performing store manager in July 2016 because she became pregnant, a court found according to documents obtained by The Daily Caller News Foundation.

A Washington state court on Oct. 13, 2017, ordered the parent companies for Tully’s Coffee chain to repay the woman $80,000 in lost wages and $40,000 in damages for the “pain and suffering” after her unlawful termination, court documents show. (UPDATE: Avenatti’s Companies Haven’t Paid The Victim A Single Cent)

Both parent companies, Global Baristas, LLC and Global Baristas US, LLC, are either directly or indirectly controlled by Avenatti, according to government records reviewed by TheDCNF.

The woman, Elizabeth Eno, worked for the chain from 2012 until she was fired in July 2016, shortly after she informed her supervisor that she became pregnant, according to court documents.

But two days later, the woman’s supervisor told her that she had, in fact, fared poorly in the evaluation and informed her that she had been fired, the court found. This was roughly a week after she had revealed her pregnancy to her supervisor.

The defendants “failed to provide a justification for Ms. Eno’s termination based on poor job performance or to further a legitimate business necessity,” the court found.

Before she was fired, Eno had recently been ranked the second-highest performing store manager in the district and tenth-highest in the entire company, according to the court’s statement of facts.

The court stated as fact that the coffee chain “unlawfully discriminated against Ms. Eno when she was terminated due to her pregnancy.”

She was awarded $80,000 to recover “lost wages due to being unable to secure equal employment.”

“Additionally, as a result of Defendants’ actions, Ms. Eno experienced pain and suffering due to being pregnant and having a child while unemployed and unable to take leave under the Family Medical Leave Act,” the court found, awarding the woman $40,000 in damages.

Avenatti acquired Tully’s Coffee chain in 2013 in a business partnership with movie star Patrick Dempsey, who sued Avenatti less than two months later. Dempsey accused Avenatti of misrepresenting the company’s available capital and then secretly using the company’s assets to secure a $2 million loan. Avenatti denied that claim but three days later agreed to a settlement that allowed Dempsey to walk away from the company.

Avenatti’s spokesperson told the Seattle Times on March 8 that he “divested his interest in Tully’s nearly a year ago.” The paper noted that Avenatti publicly described himself as the company’s head as recently as July 2017. Avenatti hasn’t said when he sold his share in the company, or to whom.

Global Baristas US, is controlled by the similarly named Global Baristas LLC — which Avenatti currently controls, according to Washington state records reviewed by TheDCNF.

Both companies were listed as defendants in the lawsuit.

“Defendants Global Baristas, LLC and Global Baristas US are liable to the Plaintiffs for all damages in the total amount of $120,585.00,” the court concluded.

The companies declined to appear in court or respond to the ruling, forcing the court to order the award’s garnishment from the company’s bank account, court records show.

“I have no idea. I had nothing to do with that case,” Avenatti said in an email to TheDCNF on Thursday. He declined to identify who, if not him, currently owns Tully’s Coffee. Avenatti remains the company’s general counsel, he said in a phone interview on May 10.

The sex discrimination case against Global Baristas was first noted on Nov. 13, 2017, by a local Seattle blog, which didn’t tie Avenatti to the company or note that the woman was allegedly fired for being pregnant.

Although Avenatti has said that he no longer has a financial interest in Tully’s, it remains unclear just how involved he is with the financially embattled coffee chain. Avenatti “described himself as the principal or chairman of the Tully’s chain” in April and July 2017, the Seattle Times reported this past April.

Former Tully’s store manager Robert Sifuentez told the Seattle Times that Avenatti’s “name was the only name on my paycheck … up until we closed,” which was in March of this year. As noted above, Avenatti is still listed as the governing interest for the parent company of Tully’s parent company. 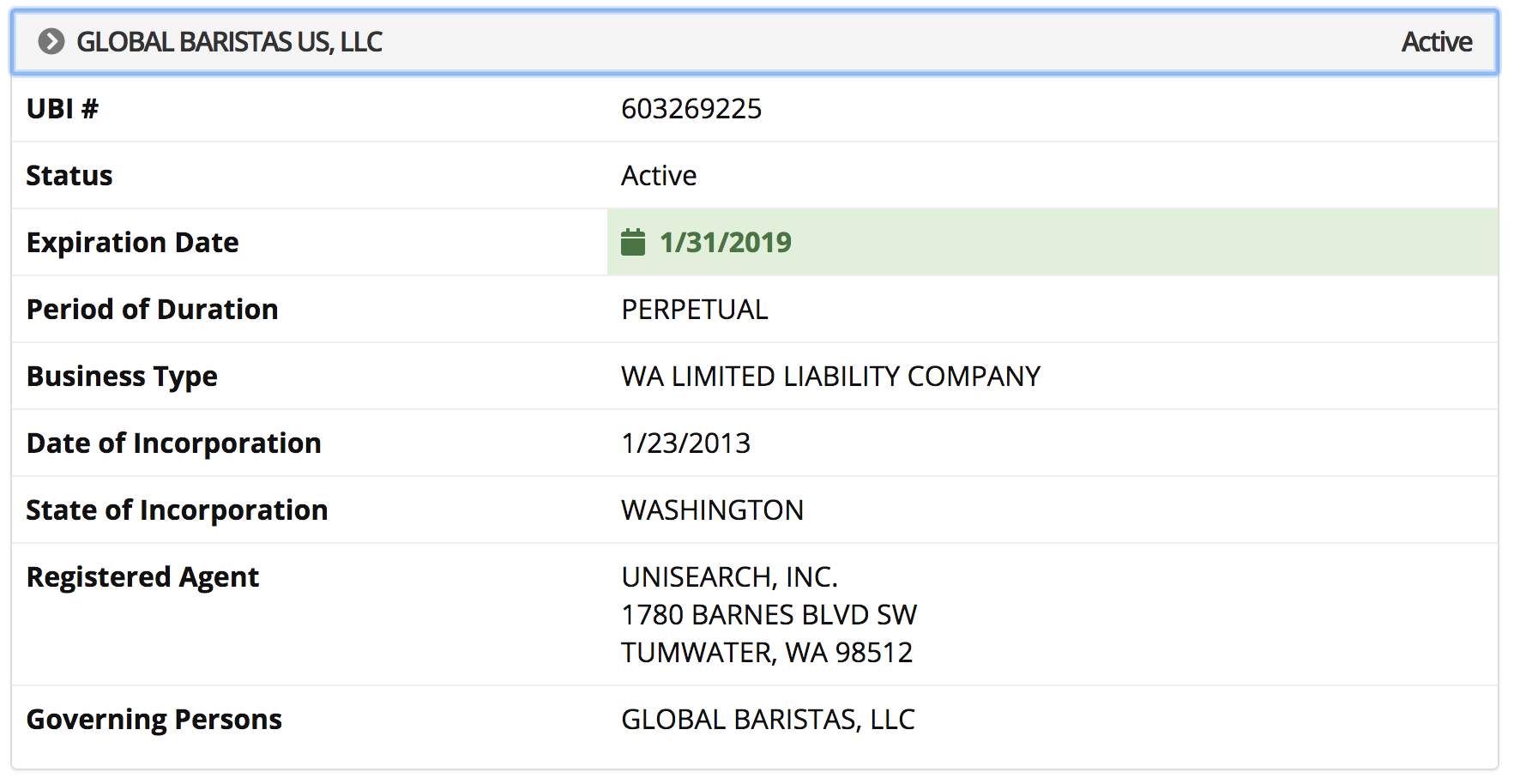 The governing person for Global Baristas US, LLC is the similarly named Global Baristas, LLC. And as it turns out… (Photo: Screenshot/Washington Secretary of State/sos.wa.gov) 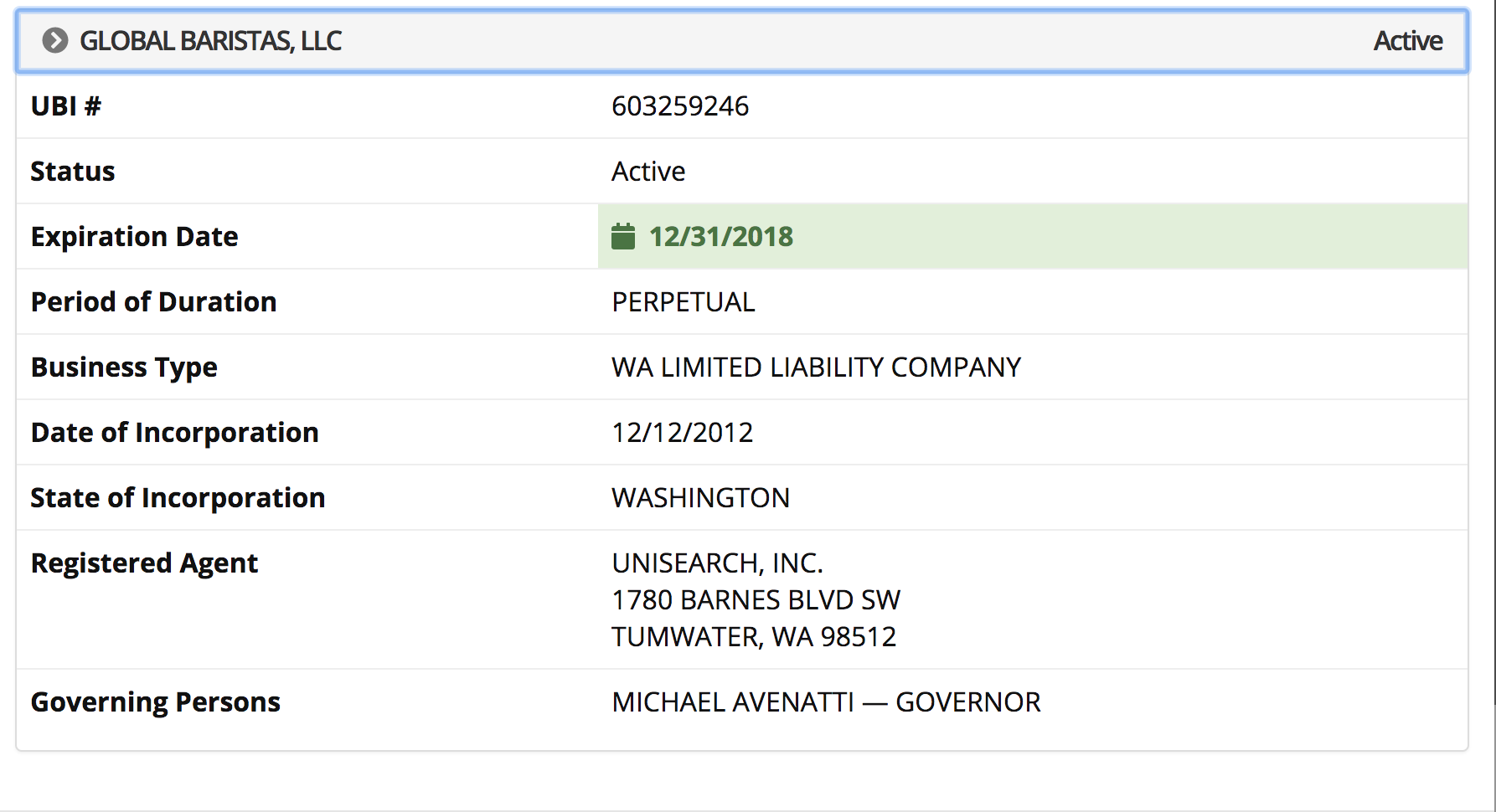 Tully’s coffee chain has been swamped in lawsuits from vendors and creditors who say they were stiffed. Forty-five lawsuits have been filed against the company, Business Insider reported. The coffee company “temporarily” closed down all stores on March 8, the Seattle Times reported.

The listed spokesperson for Tully’s, Suzy Quinn, also serves as Avenatti’s media relations director in his representation of Stormy Daniels and her lawsuit against President Donald Trump.

Quinn did not respond to TheDCNF’s request for clarification on Avenatti’s present relationship to Tully’s.

According to Quinn’s LinkedIn page, she was “hired by Michael Avenatti to direct all the media relations around Ms. Stephanie Clifford’s case (Stormy Daniels) winning massive press and continuing to be the number one story in the US news cycle.”

Despite Tully’s suspending its store operations in March, the company’s website indicates that it’s still active. TheDCNF could not find any evidence that Tully’s had recently filed for bankruptcy.

According to an internal staff memo obtained by The Seattle Times, Tully’s closed its retail stores on March 8 because it had “very minimal coffee left.” Quinn denied to the Seattle Times at the time that Avenatti owned the company but employees who spoke to the paper challenged that claim.

“Avenatti personally handles all payments to vendors, landlords, etc.,” one employee told the Seattle Times. “If he’s not the owner, that’s definitely news to us. There’s been no indication to the contrary,” he added. “That is a very bizarre thing to hear.”

“In essence, he bought a company out of bankruptcy and then used it for a ‘pump and dump’ scheme to deprive federal and state taxing authorities of millions of dollars,” Nold wrote in the complaint.

An individual who has worked with Avenatti in the past has described his business dealings as “corrupt” and as someone who “lies” and acts unethically. The individual also alleged that Avenatti has pursued similar business interests with the same intent of “pumping and dumping.”

The California State Bar has opened an investigation into that complaint, according an April 18 letter obtained by Fox News on Wednesday. The state bar only launches an investigation if the attorney reviewing the complaint “sees evidence of a serious violation,” according to its website.