President Trump spoke with reporters this morning before laving for the Naval Academy to give the commencement speech to thousands of recent graduates. Trump answered a series of questions in front of Marine One about North Korea and Harvey Weinstein. Trump denied knowing anything about the Weinstein case. Trump said, “We’ll see what happens” on North Korea.

This week, Trump canceled the much anticipated meeting with North Korean leader Kim Jong Un in response to angry rhetoric and saber rattling out of the hermit nation with nuclear ambitions.

A reporter then shouted if North Korea was playing games.

Trump paused and pointed at the reporter and quipped, “You know that better than anybody.” 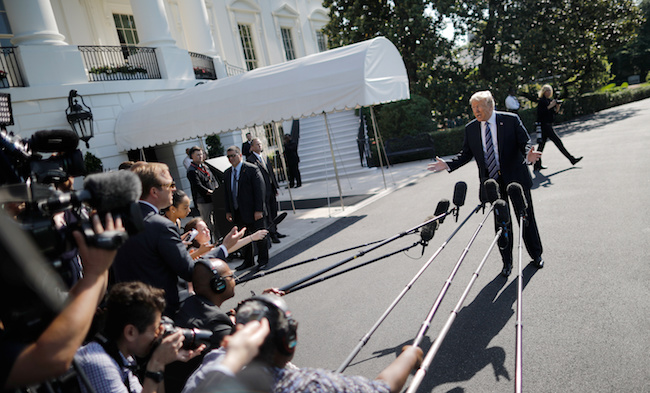 President Donald Trump leaves the White House for a trip to Annapolis, Maryland, in Washington, May 25, 2018. REUTERS/Carlos Barria

Trump then gave an update that Melania Trump is doing well, saying she is “looking at us” pointing at the White House, “right there.”

1
'Mommy And Daddy' Escort 'Antifa Kid' Suspected Of Kicking Off Riot To Turn Himself In
US
2
Florida Sheriff Cautions Rioters, Says He Encourages Citizens To Defend Their Homes With Guns
US
3
At Least 5 Police Officers Shot, 1 On Life Support As Rioters Across The Country Attack Law Enforcement
US
4
Whoopi Goldberg To Rioters: 'If You Burn Everything Down,' We 'Still Have To Come Up With A Solution'
Entertainment
5
Tucker Carlson Rips Jared Kushner: Trump's Instincts 'Have Been Subverted At Every Level'
Media