Twitter recently blocked a user who posted sharp criticism of Hamas, the militant and political Islamist organization regarded by much of the international community as a terrorist group.

After The Daily Caller News Foundation contacted Twitter to ask why, a representative for the social media giant said there was an error, and that the account’s full capabilities would be reinstated.

“The account was not suspended but placed in a temporarily locked state until it deleted the Tweet,” Liz Kelley, a spokeswoman for Twitter, told TheDCNF. “This was our mistake and has been communicated to the account owner.”

Brian Luedke, a masters-prepared registered nurse based in northern Virginia, uses the platform, among other things, to offer his deep-seated critiques of socialism and the left end of the political spectrum in general. He said while Twitter did eventually reach out to him, he never received any apology, nor an explanation behind the fault. 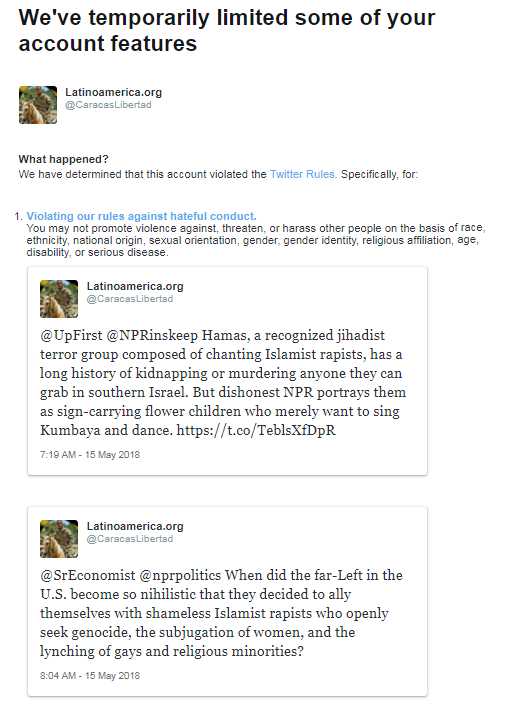 Luedke’s tweet made explicit reference to Hamas, which has been in the news more recently as tensions in the larger Gaza border area have been heating up, leading to dozens of deaths and thousands of injuries. Hamas, which for the most part represents pro-Palestinian interests, has been teaming up with protesters in the extremely contentious battle over the rightful owner of the holy land. Luedke, more broadly, sees the ostensibly complex situation as fairly clear-cut: a terrorist organization aggressively pushing for its objectives through criminal, heinous ways. And so, within the social media post, he wondered why Hamas was being portrayed by portions of the media as “sign-carrying flower children.”

Islamist Watch, a project of the think tank Middle East Forum (MEF), works to combat the ideas and institutions of lawful Islamism.

“We believe that if radical Islam is the problem, then moderate Islam must be the solution,” Sam Westrop, director of Islamist Watch, told TheDCNF. He said one of its initiatives is tracking social media censorship as it relates to its overarching goal.

“Just in our field, hundreds of anti-Islamist groups and activists have been banned from using digital advertising agencies, suspended from Twitter and Facebook, and demonetised on YouTube,” Westrop said. “Twitter is an important example. Its rules are vague enough to allow censorship to be deployed unreasonably and inequitably. And its censors certainly make use of that fuzziness.”

Twitter defines “hateful conduct” as “behavior that incites fear about a protected group” — a huge problem for Westrop because “it refers to fear that is inferred by others, regardless of the poster’s intention.”

The statement, “Radical Islam is a problem,” was “87 [percent] likely to be perceived as toxic.”

“ISIS is a terrorist group” yielded the same purported “toxicity” rate, while “Hamas’s charter calls for killings Jews” was deemed by Google to be a comment with a 92-percent chance of being interpreted as “toxic.”

Such an application was powered by algorithms, which are arguably the inherent reflections of their creator. (RELATED: Are Faulty Algorithms, Not Liberal Bias, To Blame For Google’s Fact-Checking Mess?)

And for Luedke’s case, it’s not clear if the tweets were removed by a human content moderator or through its proprietary algorithms that presumably flag words and terms like “lynching of gays” and “Islamist rapists” even if they are used in a context of describing a U.S. State Department designated Foreign Terrorist Organization. (Twitter refused to provide clarification on this point.)

“I can only conjecture that the Leftist functionaries at Twitter were incensed by my mentioning of ‘rapist’ in conjunction with ‘Islamist,’ since that is a theme that they are particularly eager to suppress, although obviously there is ample objective evidence linking radical Islam with the subjugation and exploitation of women,” said Luedke, while referencing the Israel Defense Forces’ description of Hamas.

“Of particular concern is the abuse — physical, sexual, and verbal — that a large portion of women in Gaza endures,” the military forces page reads. “Significantly, there is no law in Gaza that prohibits violence against women within the family, sexual violence included.”

Luedke said he is “especially sensitive to Leftist victimhood obsession” and its purported “us-vs-them mentality” because his wife, a former TV news presenter in Rwanda, as well as several of his Rwandan friends, are Tutsi genocide survivors.

Westrop said it’s possible that Luedke’s account was restricted by mistake, but the frequency of examples to which he sees first-hand makes him highly suspicious of that notion.

With such a rate of occurrence — “affecting thousands upon thousands of social media users,” he claimed — “it is no longer simply an irregularity; it is convention.”

While his Twitter account has a paltry number of followers, at least relatively, Luedke’s Facebook equivalent has more than 130,000 followers. He hasn’t personally experienced any forms of censorship for that social media platform (except for some brief squabbles), which would have a way larger effect. Regardless, that doesn’t matter in Luedke’s eyes.

“I was shocked to see I had been suspended. I was clearly, specifically referring to an extremist jihadi terror group, not making drunken statements about ‘all Muslims,'” he said.

Daniel Pipes, the president of MEF, said Luedke’s example is “appalling” and one of the worst examples his team has ever seen.

Twitter has longed been accused of suppressing content that comes from conservatives and the like, and even more so in recent months as tech giants have been pressured to intensify their censorship tactics against terrorists, false news and the always ambiguous “hate speech.” (RELATED: Twitter Says Employees Were Openly Speaking Of Censorship ‘In A Personal Capacity,’ Not For Company)

For example, Twitter said in November that it might “refine” some of its policies after it blocked a campaign announcement from Republican Rep. Marsha Blackburn of Tennessee.

The lawmaker claimed in the video that she helped stop “the sale of baby body parts” as chair of a House panel investigating purchases of fetal tissue of the nonprofit Planned Parenthood. An official for Twitter said the restriction was because Blackburn’s description and depiction of fetal tissue is considered “an inflammatory statement that is likely to evoke a strong negative reaction.”

Twitter eventually reversed the content constraint, while adding that it was a “difficult” decision to make. Blackburn tried to capitalize on the situation by trying to portray herself as yet another victim, a censored conservative.

The social media company is attempting to walk a fine line as calls for the squashing of hate speech on the platform coincide with complaints of it having a lack of a free speech ethos. But how well it’s doing in balancing those two apparently conflicting goals and ideals is dubious.

When asked what’s an appropriate threshold for judging content and deciphering between the merely unsavory and the legitimately dangerous, Westrop suggested embracing “the constitutional approach to free expression, and only censor material that actually breaks the law, such as direct incitement to violence.”

“The only real fix to censorship culture,” Westrop concluded, “is a wholesale rejection of the idea that mass-censorship should be the norm.”