In an effort to protect their users from “abusive behavior,” Twitter has taken down Kaitlin Bennett’s pro 2nd Amendment photo sporting two pistols and placed her on a 12 hour ban.

Bennett, who is the Grassroots Director of Liberty Hangout, posted a photo to Twitter on Wednesday of herself holding two pistols behind her back with a caption that read “If I had a pistol for every gender there is. #2A #CampusCarryNow”

“When I woke up Thursday morning, I received a notification saying the post would be removed,” Bennett told The Daily Caller, “and that my features would be limited for 12 hours. During this time, I could not tweet or message anyone.” 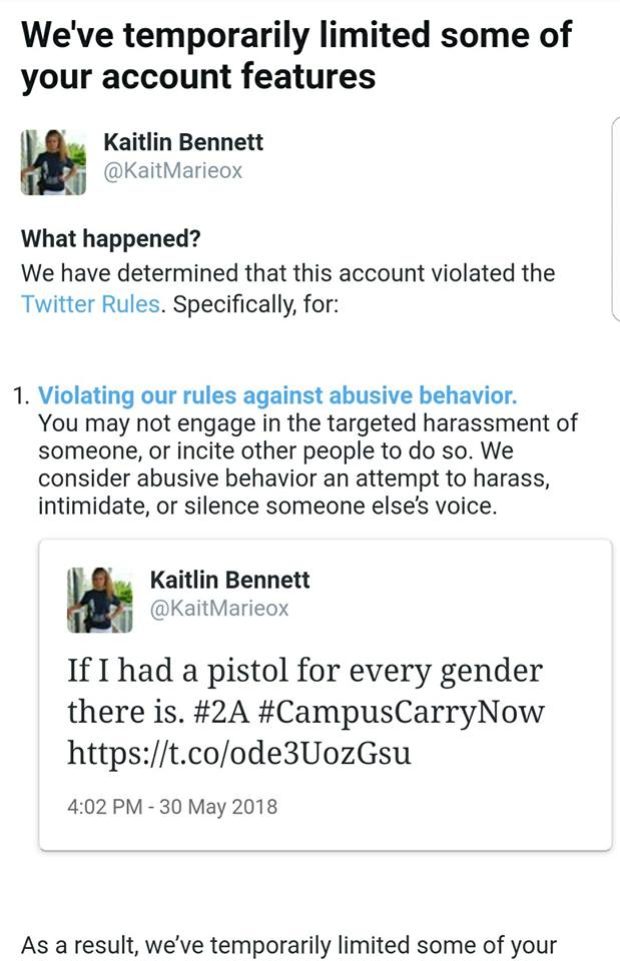 “My immediate response was to laugh at the absurdity of it being considered targeted harassment, when all I did was take an innocuous photo with two pistols and state a scientific fact,” Bennett told TheDC.

“I did not see an option to appeal the ban when I got the notification,” Bennett said. “While I’ve had posts removed on Facebook before, I’ve never had this happen to me on Twitter, until now.”

After being said to have violated Twitter’s “rules against abusive behavior,” Bennett said, “Twitter is the most vile social media platform on the internet and now I understand why it is so unfriendly to conservatives.

“Twitter should be ashamed of the environment they have created and the type of people they placate to use their platform,” said Bennett. “It’s a real shame that standing up for the 2nd Amendment and science will get you banned but making death threats to conservatives are not considered targeted harassment or abusive behavior.

Bennett also mentioned Jim Carrey, who posted to Twitter a piece of art he created of Bennett’s now popular photo standing on her college campus with an Ar-10 rifle, and how it was allowed to remain on the platform. Bennett says Carrey drew her in “front of the devil to blame a school shooting on me.”

“They [Twitter] are not even trying to hide their bias anymore. I support Twitter’s property right and believe they can let whoever they want to use their platform, however it is entirely hypocritical for them to arbitrarily enforce their community standards as a way to silence their political opposition,” said Bennett.