Brendan Dassey of “Making a Murderer” notoriety has asked the U.S. Supreme Court to review his case, arguing his conviction and life sentence for murder betrays the cavalier manner with which most trial courts treat coerced confessions from juveniles and the intellectually challenged.

Although the case comes in a procedural posture about which the justices are usually dubious, the pervasive problem Dassey’s petition reflects, the intense public interest attending his conviction and the formidable coalition of support he has assembled might compel the high court to intervene.

Much of Washington D.C.’s legal establishment has leant assistance to Dassey’s petition. His lead attorney is Seth Waxman of WilmerHale, who served as U.S. solicitor general during the Clinton administration and is widely considered one of the greatest Supreme Court advocates alive. Goldstein & Russell, P.C., a prominent boutique practice specializing in Supreme Court litigation, and Northwestern University’s Bluhm Legal Clinic are also representing Dassey.

Dassey was tried and convicted in Wisconsin for the 2005 murder of Teresa Halbach, a 25-year-old photographer who visited Dassey’s uncle, Steven Avery, shortly before her death. Police found Halbach’s charred remains on Avery’s property, and recovered her car in an adjacent junk yard. Avery’s DNA was identified inside the Halbach vehicle.

Investigators questioned Dassey, then 16 years old, about the crime several times between Feb. 27 and March 1, 2006. Dassey’s attorneys argue authorities exploited his intellectual deficits and vulnerability to suggestion during the interviews to procure a confession corresponding to their theory of the crime. Dassey has an IQ in the mid 70s and exhibited anti-social behaviors during the interviews, though a court has never made such a finding. 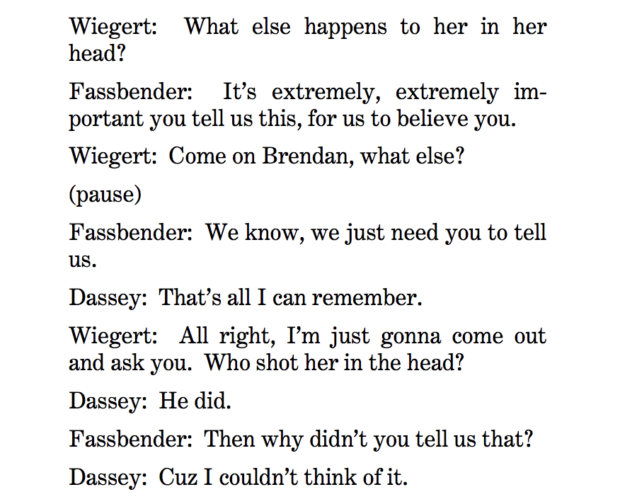 Video of the March 1 session shows the interrogation following a rather circuitous route. Dassey repeatedly gave vague or contradictory answers to the same set of questions before settling on responses that satisfied the officers. Many of the assertions to which he ultimately acquiesced were introduced by the officers, and do not appear to emanate from his own memory. Speaking to his mother after the interviews, Dassey said he guessed at the right answers, as he typically did with his homework.

In his final version of events, Dassey admitted to sexually assaulting Halbach, binding her limbs, cutting her throat, and carrying her to a garage where Avery shot her in the head.

At the conclusion of that interview, he asked to return to his sixth period class.

The confession was the primary piece of evidence brought against Dassey during his 2007 trial, as no physical evidence connected him to the crime. He was convicted of murder, sexual assault and mutilating a corpse in a Wisconsin state court and sentenced to life in prison. Now 28, he is a decade into his sentence. (RELATED: What An Arkansas Abortion Case Tells Us About Justice Kennedy’s Retirement Plans)

On appeal, Dassey’s lawyers argue the trial court was wrong to admit the confession. By their telling, the admission was involuntary, false, and elicited by coercive tactics. They assert Dassey confirmed facts or details only after they had been suggested by police through loaded questions, and gave untrue statements in an attempt to please investigators, consistent with his extreme introversion and cognitive disabilities. All the while, officers told him they were not questioning him in a law enforcement capacity, but as “fathers,” and assured him he was free to leave after answering their questions honestly.

In his petition to the high court, Dassey’s lawyers said the interrogation is representative of a broader problem. Although the Supreme Court has repeatedly mandated that judges must take the greatest care in confirming that the confessions of minors or individuals with intellectual disabilities are genuinely voluntary, the petition claims many lower courts simply acknowledge the defendant’s age or reduced mental capacities in evidentiary rulings, without analyzing how it might bear on the validity of the admission.

Such cursory treatment of these important factors, they said, is incompatible with the Court’s precedents. As such, Dassey’s lawyers are asking the justices to reiterate that judges must assess age and disability when ruling on the admissibility of confessions, and find the Wisconsin court acted unreasonably in allowing Dassey’s confession into evidence

“Review here would allow the Court to reaffirm lower courts’ obligation to follow the Court’s precedents, and provide much-needed guidance regarding how to apply those precedents so as to minimize wrongful convictions flowing from false confessions,” the petition reads.

The fact the confession was taped could redound in Dassey’s favor. His lawyers argue the video makes the case a clean vehicle, clear of the factual disputes that could make a similar case too difficult to resolve.

“Because the entire March 1 interrogation was recorded, there are no relevant factual disputes; the video transforms what could be a muddled factual inquiry into a cleanly presented legal question,” the petition reads.

Still, Dassey’s case is burdened with a significant procedural albatross. The 1996 Antiterrorism and Effective Death Penalty Act (AEDPA) dramatically circumscribes federal review of a state court conviction. Under AEDPA, a state criminal defendant can only obtain relief in a federal court if he can show a state court decision is clearly contrary to or an unreasonable application of well-established federal law.

A federal magistrate judge in Milwaukee found Dassey’s confession was coerced in August 2016, but the 7th U.S. Circuit Court of Appeals reversed, relying in significant part on the deference federal courts must give state courts under AEDPA.

“Under AEDPA, the essential point here is that the totality-of-the-circumstances test gives courts considerable room for judgment in cases like this one, where the factors point in both directions,” the 7th Circuit decision reads. “Given the many relevant facts and the substantial weight of factors supporting a finding that Dassey’s confession was voluntary, the state court’s decision was not an unreasonable application of Supreme Court precedent.”

The state of Wisconsin makes similar arguments to the justices in its brief opposing review, maintaining the confession’s admission was not clearly at variance with federal law, while emphasizing the limited scope of federal scrutiny under AEDPA.

The state also notes Dassey’s mother gave law enforcement permission to question him and forfeited her right to be present during the interviews. For their part, the state said, investigators spoke in measured tones throughout the sessions and offered food, beverages and bathroom breaks as needed. Dassey also waived his Miranda rights before the interrogations.

The Dassey petition commands support from a coalition of mental health groups led by the American Psychological Association, state and federal prosecutors, and law enforcement instructors who specialize in interrogation tactics, each of whom filed amicus (or “friend-of-the-court”) briefs urging the justices to take the case. (RELATED: Ginsburg And Gorsuch Are Trolling Each Other In An Epic Way)

As with his petition for review, the amicus briefs were prepared by leading members of the Supreme Court bar, including Lisa Blatt of Arnold & Porter and Beth Brinkmann of Covington & Burling LLP.

It’s striking to see a significant portion of legal Washington rally to a single petition. Anthony Franze of Arnold & Porter, who is counsel of record on an amicus brief for state and federal prosecutors supporting Dassey, told The Daily Caller News Foundation that important pro bono work is essential to his firm’s identity.

“It’s part of the culture of Arnold & Porter to correct injustices,” he said. “And you don’t have to look far to see the gross injustice here — just watch the video of Brendan Dassey’s interrogations. It speaks for itself.”

“The proof is in the pudding,” he added. “False confessions were involved in a startling number of the thousands of DNA and other exonerations of the wrongfully convicted. And studies of exonerations show that juveniles are overrepresented in the number of false confessions. The high court’s review here would not only correct the injustice for Dassey, but send a message to lower courts that they must take these matters more seriously.”

Franze’s amicus brief explains that prevailing interrogation techniques do not reflect the developmental differences between children and adults. As such, tactics or methods which are useful, reliable, and fair when applied to adults can sometimes extract false confessions from children. The filing cites social science research that shows popular interrogation strategies fail to account for a child’s suggestibility, submissiveness to authority and difficulty with gratification and time perception.

The justices are scheduled to consider Dassey’s petition on June 14.