A Huffington Post editor used a homophobic slur, made anti-Semitic Holocaust jokes, and tweeted about hating police officers in old tweets, The Daily Caller has learned.

Lewis’ Twitter page has a number of anti-Semitic jokes, including vile jokes about the Holocaust.

Lewis has also tweeted, “im tired of all these jewish jokes….Anne Frankly, i dont approve.”

He has also tweeted praise for Louis Farrakhan, the anti-Semitic, homophobic, anti-white Nation of Islam leader. Lewis tweeted, “Louis Farrakhan is as sharp in 2015 as he was in 1967. I hope my mind can stay that sharp as I age.” 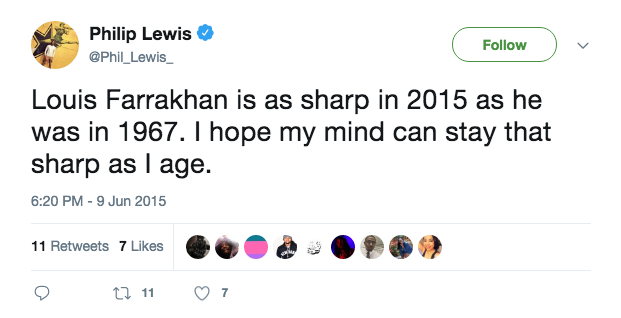 Farrakhan has previously said, “the Satanic Jews…control everything and mostly everybody.”

He has also praised Adolf Hitler, saying, “The Jews don’t like Farrakhan, so they call me Hitler. Well, that’s a good name. Hitler was a very great man.” (RELATED: Seven Louis Farrakhan Quotes On Jews, Gays And White People)

Lewis has also repeatedly used homophobic slurs in the past, as recently as 2014.

“Got hit on last night by a dyke, I’m still confused as to what that was all about lol,” he tweeted in May 2014.

He’s also said, “Get this dyke off the computer lol.”

Lewis also was not a very big fan of the police, according to his previous tweets.

He once tweeted, “Woooooooooow I hate cops.”

The Daily Caller reached out to both HuffPost’s media contact, as well as Lewis’ email, but received no comment from either by press time.