Scalia, a Supreme Court justice, died on February 13, 2016. He was known for his strong conservative opinions.

While many were mourning his death on the day it happened, Raillan Brooks decided to make several jokes about it.

After Scalia’s death, Brooks tweeted, “can we all take a second to appreciate that Scalia died in FUCKING MARFA?”

This is in reference to the fact that Scalia died on a ranch in Marfa, Texas.

“ANTI” is an album released by artist Rihanna, and “brown note” means a noise that can be played that will make you defecate yourself. 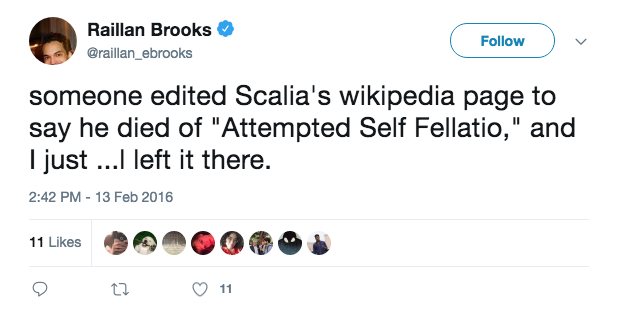 Finally, there was also this sick joke: 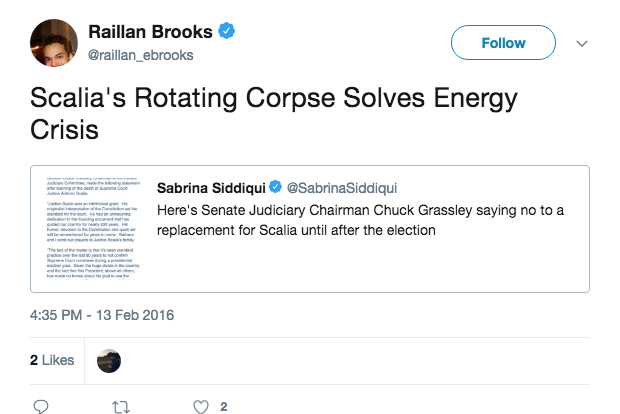 According to Brooks’ LinkedIn, he is a former editor at HuffPost’s Highline blog and was a senior editor at Village Voice before joining the Times. He was hired by NYT in February 2017.

TheDC reached out to the New York Times’ press contacts and Brooks over email for comments, but received no response.

As previously reported by TheDC, Brooks isn’t the only New York Times employee with a questionable Twitter history.

Patel also did not think that the military protected his freedom at all.

The Times also hires people who have a history of tweeting racial slurs.

When asked for comment, none of the reporters responded, nor did the New York Times’ press contacts.