The United States is slightly more restrictive overall in trade than Canada and the European Union, according to data compiled by the White House Council of Economic Advisers and obtained by The Daily Caller News Foundation.

The data, which shows that the combined impact of America’s tariff and non-tariff trade barriers are slightly higher than the measures Canada and the EU imposed, refutes statements made by President Donald Trump. The president has repeatedly justified his aggressive trade policy against his key trade allies based on what he says are unfair trade practices levied on U.S. exports.

“This argument that somehow the rest of the world is mistreating us and that we have lower tariffs than anyone else is just a lie. It’s just flat out wrong,” a former consultant for the Reagan administration’s Office of the U.S. Trade Representative, Claude Barfield, told TheDCNF.

Trump routinely points to the U.S. trade deficit as proof America is losing in international trade. The key to balancing out the trade deficit, Trump argues, is to enact reciprocal tariffs on America’s trading partners so both sides are on a level playing field.

Trump’s goal is to eliminate all trade barriers between the U.S. and its trading partners, the president said at the conclusion of June’s G7 summit.

While Trump has legitimate complaints against China’s trade practices, his rhetoric against Canada and the EU is largely unjustified, according to over half a dozen economists who spoke with TheDCNF. They also say that barrier-free trade won’t reduce the U.S. trade deficit. (RELATED: TRADE WAR – Markets Tank On Trump’s $200 Billion Chinese Tariffs)

The most recent Economic Report of the President shows that the U.S. imposes lower tariffs and non-tariff trade barriers than other G20 and developing countries, but the raw data the White House used tells a different story. 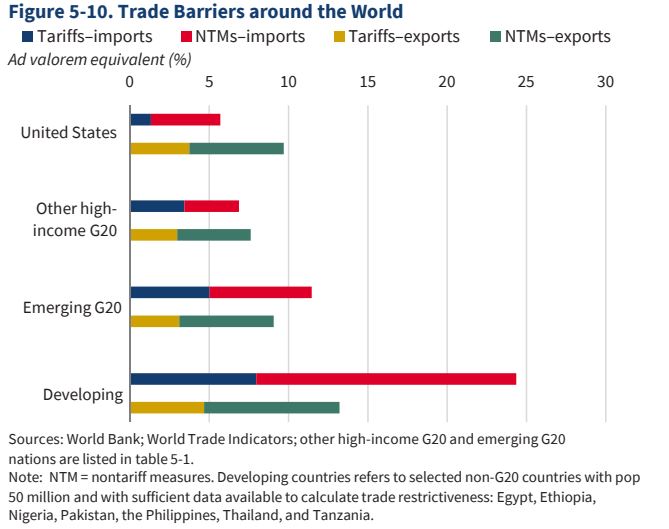 (Source: Economic Report of the President, Council of Economic Advisers/Screenshot)

The White House pulled data from the World Bank’s Overall Trade Restrictiveness Index (OTRI) to create its own trade barriers chart, and the outcomes it presents are mirrored in claims made by key Trump administration officials. National Trade Council Director Peter Navarro, for example, said in March that the U.S. has “the lowest tariffs in the world” and “lowest non-tariff barriers.”

Unlike regular tariffs, which are essentially a tax on imported products, non-tariff barriers are applied in the form of product regulations, safeguards, quotas and price controls, making it difficult for economists to determine their exact impact. (RELATED: Tariffs Are Taxes)

The EU, for example, banned imported beef containing artificial growth hormones as a health regulation designed to protect its citizens. Both the Obama and Trump administrations challenged the measure, accusing the EU of unfairly discriminating against American beef imports.

According to the OTRI, which measures the combined impact of tariffs and non-tariff barriers nation states impose, the U.S. is slightly more restrictive overall in trade than Canada and the EU.

The OTRI is one of the most reliable measures of trade restrictiveness available to economists today, according to Hufbauer. He added that Trump’s statements that the U.S. is being treated unfairly are “complete rubbish.”

The U.S. Has More Non-Tariff Barriers Than Other Major Trading Countries

Measuring the impact of non-tariff barriers have proven to be a challenge for economists, but, according to a 2015 report from Credit Suisse, the U.S. has significantly more than any other country. 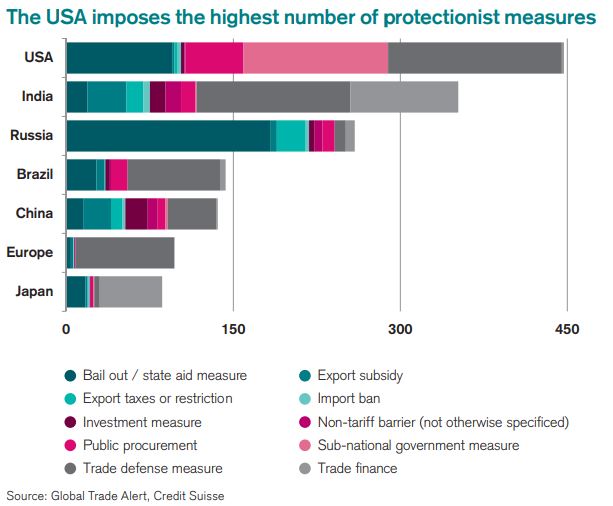 Trade economists generally agree that non-tariff barriers have a much greater impact on trade than regular tariffs.

“The consensus among trade economists is that, while tariffs have been going steadily down since World War II … non-tariff barriers have not and perhaps even have gone up to replace them,” University of Michigan international economics professor Alan Deardorff told TheDCNF.

“Even though it’s hard to know how big they are, I think the consensus would be that the non-tariff barriers are restricting trade more these days than tariffs are, certainly in high-income countries, which have the lowest tariffs,” Deardorff continued.

The conservative Heritage Foundation also found that the U.S. is slightly more restrictive in trade than Canada and many EU countries, according to its Index of Economic Freedom, which measures countries on 12 categories ranging from policies surrounding trade freedoms to the size of government.

The U.S. ranks 18th in Heritage’s index, falling behind Canada, the United Kingdom, Sweden and Switzerland.

“Based off of these metrics, the United States doesn’t have the lowest tariffs,” Heritage policy analyst Riley Walters told TheDCNF. “We have traditionally had a lot of the higher non-tariff barriers. We’ve had a lot of investment restrictions and a lot of regulations.”

“Compared to China, we are very open in our investment,” Walters continued. “But we are marginally more restrictive than some other countries, specifically those within the EU.”

Walters also said the data shows that the U.S. imposes a higher average tariff across all products in comparison to Canada.

On Tariffs, Trump Is Selectively Choosing Data Points While Ignoring Others

The data doesn’t back up Trump’s statements, even when taking out the uncertainty surrounding non-tariff barriers and just looking at regular tariffs.

The president has directed much of his rhetoric in recent weeks toward Canada and its prime minister for imposing a 270 percent tariff on imported dairy, which Trump says contributes to the U.S.’s bilateral trade deficit with Canada. (RELATED: Fact Check: Does Canada Charge A 270% Tariff On US Dairy?)

Trump has also decried a 10 percent tax the EU imposed on U.S. car imports, which is four times what the U.S. taxes imported cars.

While Trump is correct about those specific tariffs, across all products in 2016, the U.S. levied an average tariff rate that was slightly higher than the rates imposed that Canada and the EU imposed, according to World Bank trade data.

The U.S. applied an average tariff of 1.61 percent across all products in 2016 — a rate far below the worldwide average, but nearly double the 0.85 percent average tariff Canada levied.

Barfield, the former White House consultant, who is also an American Enterprise Institute trade analyst, told TheDCNF that Trump is cherry-picking the data when it comes to tariffs.

“Aside from special instances, tariffs, as you can see by the numbers, are not really a problem,” Barfield said. “They’re very low, they’re not really an issue across the board.”

“What Trump is doing when he talks about dairy is he’s picking one thing from Canada, even though Canada is a free trade country, as are we, and as is the European Union, by and large,” Barfield said. “He’s also picked on the 10 percent tariffs that the Europeans have on cars, and he’s talking about getting that down to zero. What he doesn’t say … is that we have a 25 percent tariff on light trucks, which is a very big deal.”

Council of Economic Advisers chief of staff DJ Nordquist said the average tariffs and trade barriers across all products presented in the White House’s economic report does not reflect individual tariffs that are so high that they completely restrict, or lock-out, trade of that particular product.

“It can simultaneously be true that the trade-weighted average across a bundle of products is lower — but for particular products, there can be tariff and/or non-tariff barriers that are so high as to prevent any trade from occurring at all,” Nordquist told TheDCNF.

“It is what is called a lock-out – zero trade,” she continued. “For those high tariff products, a simple average would give you a better measure of that kind of barrier than would a trade-weighted average because the trade weight of zero erases the impact of the tariff.”

The 562-page White House report does not analyze or discuss such tariffs.

Tariffs And Trade Barriers Don’t Cause The Trade Deficit

Trump said in March he has “no choice” but to impose “reciprocal taxes” on U.S. trade partners in order to whittle down the trade deficit. His trade lieutenants have echoed similar comments.

“American tariffs are among the lowest in the world,” Navarro wrote in a recent New York Times op-ed. “Our generosity and free market good will has only led to a huge trade deficit and the transfer of wealth abroad.”

Secretary of Commerce Wilbur Ross wrote that unfair tariffs are “responsible for a significant portion of our current trade imbalance” in a July 2017 Wall Street Journal op-ed.

Trump “would flunk an economics 101 course if he tried to make the case that trade policy governs or has a big impact on a nation’s trade balance,” Barfield said.

Trump’s goal is to see to the development of a world trade system with no trade barriers, the president said at the conclusion of the G7 Summit in Canada in June.

Mercatus Center trade economist Christine McDaniel told TheDCNF that Trump is right to seek the elimination of trade barriers, but said it won’t realize his desire to reduce the trade deficit.

“Trade policy is not related to the trade deficit. Nobody is getting ripped off,” McDaniel, who was a trade economist in the George W. Bush White House, said. “Economists know this, they’ve known this forever, but it’s an easy line-item for politicians to use the trade deficit to try to get the point across that trade isn’t fair. Whether or not trade is fair or not, it’s completely separate from the balance of trade.”

“We could go zero-for-zero with the world — we could have total free trade — and the U.S. would still run a trade deficit because Americans like to consume a lot and we don’t save a lot, so we have to finance that with foreign dollars,” she told TheDCNF.

Despite disagreeing with Trump on the trade deficits, economists agree that his goal of reducing trade barriers is a worthwhile endeavor. But they’re split on whether the president’s provocative approach toward achieving that goal through the threat of a trade war is a good strategy. (RELATED: Trump Threatens Tariffs On European Cars, Stocks Tank)

“I think it’s a great tactic,” a trade economist with the libertarian Cato Institute, Simon Lester, told TheDCNF. “I don’t think it will work out for [the Trump administration], because what’s going to happen is they’ll sit down with other countries and those other countries will point out all of our high tariffs and other barriers.”

“But I like that approach, and I hope other countries pick up on it, take it and run with it,” Lester continued. “Absolutely, we should sit down and negotiate no tariffs, no barriers and no subsidies with people. If that happens, and the Trump administration sits down with others, they will find out that actually, the United States has lots of tariffs, barriers and subsidies.”

“Overall, I think it’s kind of a ham-fisted approach,” Meltzer told TheDCNF of Trump’s trade strategy. “The real issue for the U.S. is not Europe or Canada — it’s China.”

“What the United States needs from China is some pretty significant domestic reform, and this is going to be very hard to do — China is not required to do it,” Meltzer told TheDCNF. “The process of simply putting tariffs on China is not going to get at these underlying issues. It’s going to require a much more nuanced strategy that includes getting all your other key allies, particularly Japan and the EU, on the same page.”

Elias Atienza contributed to this report.