A reporter at a Massachusetts-based newspaper resigned Friday after falsely claiming in a tweet Thursday that the man who killed five employees at the Capital Gazzete newspaper left a “Make America Great Again” hat at the crime scene. 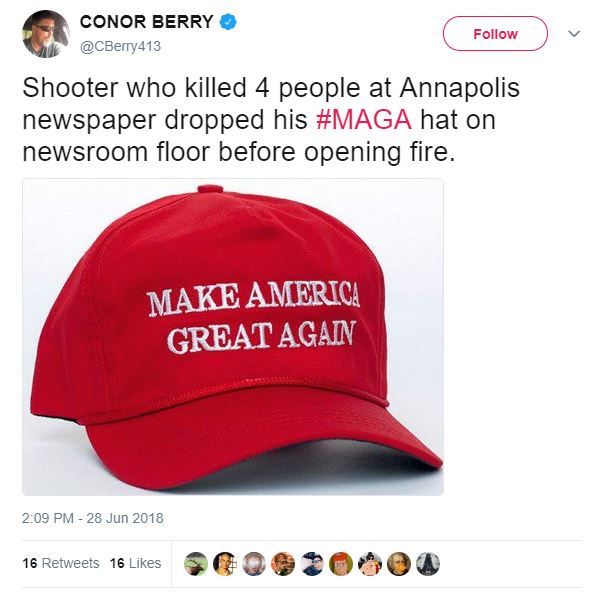 Berry, who covered politics and crime for The Republican, apologized for the “stupid” and “regrettable” tweet Friday, adding that it made his 21-year career as a journalist come to a “screeching halt.”

Folks, My 21-year career as a “journalist,” a fancy term that makes my skin crawl, frankly, came to a screeching halt yesterday with one stupid, regrettable tweet. Can’t take it back; wish I could. My sincere apologies to all good, hardworking reporters and to POTUS supporters.

Berry took full responsibility for the tweet in a resignation notice posted Friday on The Republican’s website.

“I am ashamed of my tweet, which taints the good work of fair-minded journalists everywhere,” Berry said.

“We need to be more vigilant than ever to be fair and accurate in a climate in which we are scrutinized and criticized,” said Wayne Phaneuf, the executive editor of the newspaper, in a statement.

In a follow-up interview with the Boston Globe, Berry said his tweet was a “snarky, sarcastic, cynical remark,” and lamented that his tweet gave more fuel to critics of the news media that believe reporters try to push a partisan agenda.