Wikipedia is protesting the European Union’s copyright initiative, which many people believe will do significant damage to freedom on the internet and effectively make memes illegal.

The Italian Wikipedia website went dark on Tuesday to spread the word that the proposed copyright law would make it nearly impossible for Wikipedia to exist in the EU. The European Parliament voted on June 20 to pass the initiative, but there will be another vote on Thursday.

“On July 5, 2018, The Plenary of the European Parliament will vote whether to proceed with a copyright directive proposal which, if approved, will significantly harm the openness of the Internet,” the Wikipedia statement reads.

“The directive instead of updating the copyright laws in Europe and promoting the participation of all the citizens to the society of information, threatens online freedom and creates obstacles to accessing the Web, imposing new barriers, filters and restrictions,” Wikipedia added. “If the proposal would be approved in its current form, it could be impossible to share a news article on social networks, or find it through a search engine; Wikipedia itself would be at risk.” 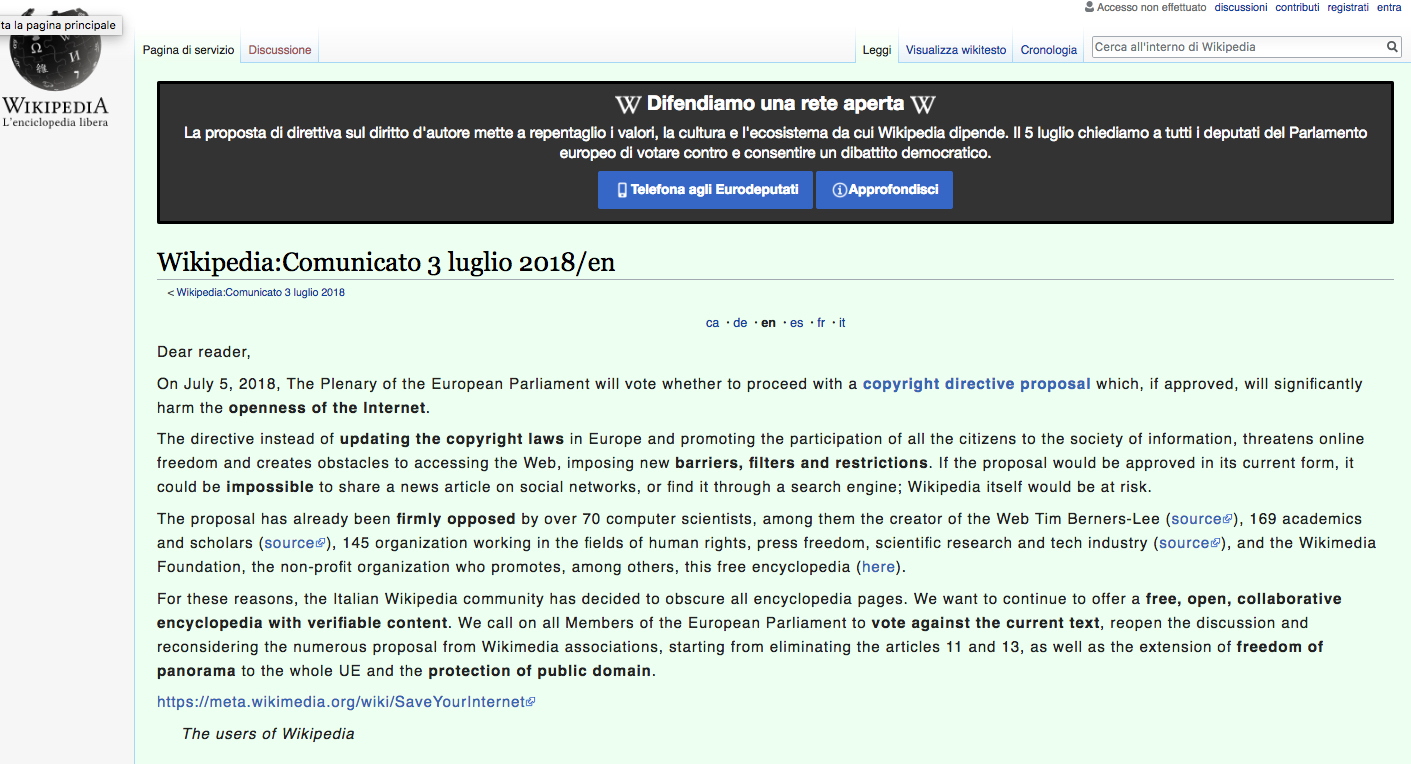 The proposals Wikipedia is protesting are Articles 11 and 13 of the EU’s Proposal for a Directive of the European Parliament and of the Council on copyright in the Digital Market.

Article 11 forces content creators — who in this case would include Facebook, Google, YouTube and Wikipedia — to a pay a tax for simply linking to other URLs. (RELATED: Wikipedia Adds US Immigrant ‘Detention Centers’ To List Of Concentration And Internment Camps)

Article 13 effectively makes parody and satire illegal, which includes memes, through forcing content creators to use a government-monitored filter that would automatically block anything it considers a violation of a pre-existing copyrighted content.

“The European Commission and the Council want to destroy the Internet as we know it and allow big companies to control what we see and do online,” said Save Your Internet — a coalition of digital rights groups including Electronic Frontier Foundation, Creative Commons and the Civil Liberties Union for Europe.

The proposal is so widely hated, Tim Berners-Lee, the man who invented the World Wide Web, opposes it.