An NBC News reporter tweeted early Tuesday that Justice Anthony Kennedy secretly negotiated the terms of his departure from the U.S. Supreme Court with the Trump administration, citing a single unnamed source.

The reporters pursuing the story, Leigh Ann Caldwell and Frank Thorp, first claimed that the justice quietly conferred with the White House for several months in advance of his retirement, and agreed to step aside once he received assurances that Judge Brett Kavanaugh would be selected as his successor.

Caldwell walked back her initial claim, conceding it “incorrectly implies a transactional nature in Kennedy’s replacement.” She then said that Kennedy provided a list of acceptable nominees to the administration, which included Kavanaugh. 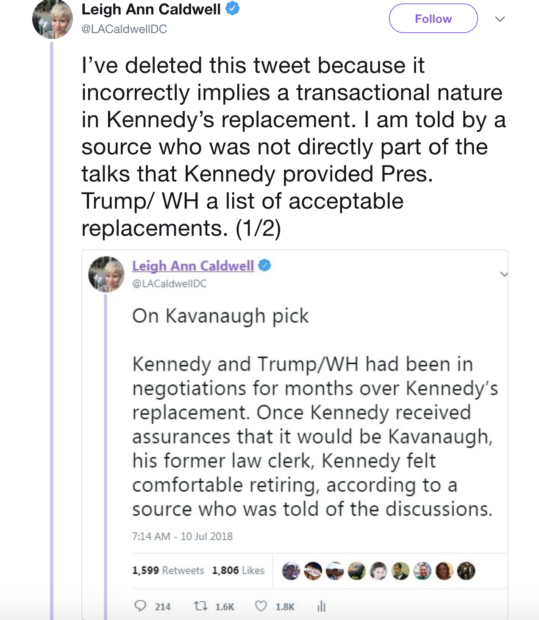 Asked Raj Shah to clarify: Did anyone in the White House assure Justice Kennedy that his replacement would be Brett Kavanaugh if he retired?

The Federalist Society’s Leonard Leo, one of the president’s closest advisors on Supreme Court nominations, was similarly emphatic Tuesday morning when conservative commentator Hugh Hewitt asked him about the NBC claim.

“Anyone who knows Justice Anthony Kennedy knows that is garbage,” Leo said. “He treats his office with tremendous dignity and independence and there is literally no way in the world that would have happened.”

The Supreme Court’s Public Information Office did not respond to a request for comment by press time. (RELATED: Supreme Court Poised For Rightward Shift Under Kavanaugh)

The NBC claims, if true, would be a remarkable departure from the typical conventions governing retirements from the high court. Though White House officials might quietly gather information about an aging justice’s plans through informal networks, there is no known precedent in the modern period for a justice hand-selecting his successor in conjunction with the White House.

Politico offers a more plausible version of the NBC report, in which Kennedy expressed a preference for Kavanaugh in his private meeting with Trump on the day he announced his retirement, but did not make his retirement contingent on any particular set of choices.

Trump himself made no secret of his consultation with the justice. When Kennedy visited the White House to relay news of his retirement, the president told reporters that he asked the justice for guidance as to possible successors. There was no indication in Trump’s remarks that Kennedy insisted on a particular replacement.