Former Speaker of the House Newt Gingrich, who has been one of President Donald Trump’s staunchest allies, expressed serious concern about the president’s press conference with Russian President Vladimir Putin Monday, in which Trump lent credence to Putin’s claim that Russia wasn’t behind the hacking of Democratic emails during the 2016 campaign.

The U.S. Intelligence Community, including Trump’s Director of National Intelligence Dan Coats, has definitively said that Russia was behind the hacking and distributing of emails from the Democratic National Committee (DNC) and Clinton campaign chair John Podesta. (RELATED: Republicans Are Outraged At Trump For Failing To Stand Firm Against Putin)

Trump declined to say whether he believed his own intelligence agencies over Putin during the presser.

So let me just say that we have two thoughts. You have groups that are wondering why the F.B.I. never took the server — haven’t they taken the server. Why was the FBI told to leave the office of the Democratic National Committee? I’ve been wondering that, I’ve been asking that for months and months and I’ve been tweeting it out and calling it out on social media. Where is the server? I want to know where is the server and what is the server saying? With that being said, all I can do is ask the question. My people came to me, Dan Coats came to me and some others, they said they think it’s Russia. I have President Putin; he just said it’s not Russia. I will say this: I don’t see any reason why it would be. But I really do want to see the server. But I have — I have confidence in both parties. I — I really believe that this will probably go on for a while, but I don’t think it can go on without finding out what happened to the server. What happened to the servers of the Pakistani gentleman that worked on the D.N.C.? Where are those servers? They’re missing; where are they? What happened to Hillary Clinton’s e-mails? 33,000 e-mails gone — just gone. I think in Russia they wouldn’t be gone so easily. I think it’s a disgrace that we can’t get Hillary Clinton’s 33,000 e-mails. 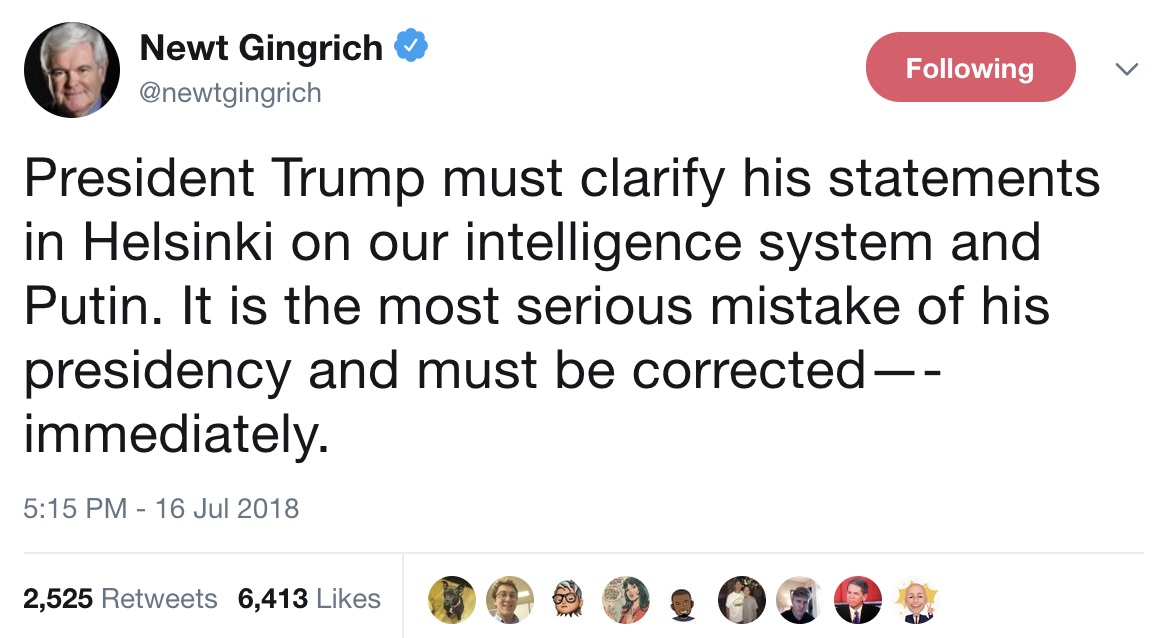 “President Trump must clarify his statements in Helsinki on our intelligence system and Putin,” Gingrich wrote on Twitter. “It is the most serious mistake of his presidency and must be corrected—-immediately.”

Gingrich, whose wife Callista was Trump’s pick as ambassador to the Vatican, is one of many Republicans who said the president was too soft on Putin during the press conference.