George Clooney’s wife Amal Clooney is reportedly “furious” after his scooter accident lands him in the hospital last week in Italy.

“While George [Clooney] is blowing it off as no big deal, Amal is furious,” a source shared with Closer Weekly Wednesday. “She and his friends have been wanting him to get rid of that scooter.” 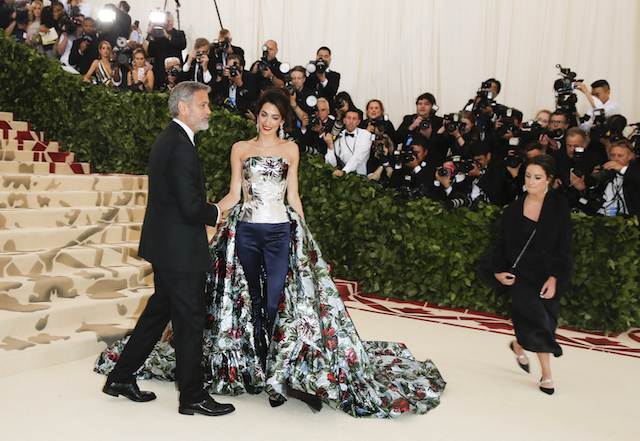 Actor George Clooney and his wife Amal Clooney arrive at the Metropolitan Museum of Art Costume Institute Gala (Met Gala) to celebrate the opening of ìHeavenly Bodies: Fashion and the Catholic Imaginationî in the Manhattan borough of New York, U.S., May 7, 2018. REUTERS/Carlo Allegri

“His mother even called him to admonish him about it, that she’s been wanting him to get rid of it, too,” the source added.

“George is saying that he’s fine,” the source shared with the outlet. “He sent out a text to all of the posse saying something to the effect of, ‘You all know what a klutz I’ve always been on and off the basketball court, and now on the streets of Italy on my bike.'”

The 57-year-old actor was reportedly driving 60 mph when a vehicle pulled out in front of him. He was thrown from the motorbike 20 feet, with his helmet hitting the front windshield during the collision, according to TMZ. The accident took place on July 10 in Sardinia, off the coast of Italy.

Surveillance video that surfaced of the crash showed just how close the actor came to being severely injured.

He was taken to by ambulance to the hospital for treatment but was released shortly after.

“George Clooney was treated and released from an Olbia hospital,” a rep for Clooney told Fox News at the time. “He is recovering at his home and will be fine.”

The “Ocean’s Eleven” star is currently in the country for the filming of “Catch 22.”