MSNBC’s Joe Scarborough was forced to issue a correction on Twitter Wednesday after accusing the White House of altering the transcript of the Helsinki press conference with Russian President Vladimir Putin.

This accusation turned out to be blatantly false. 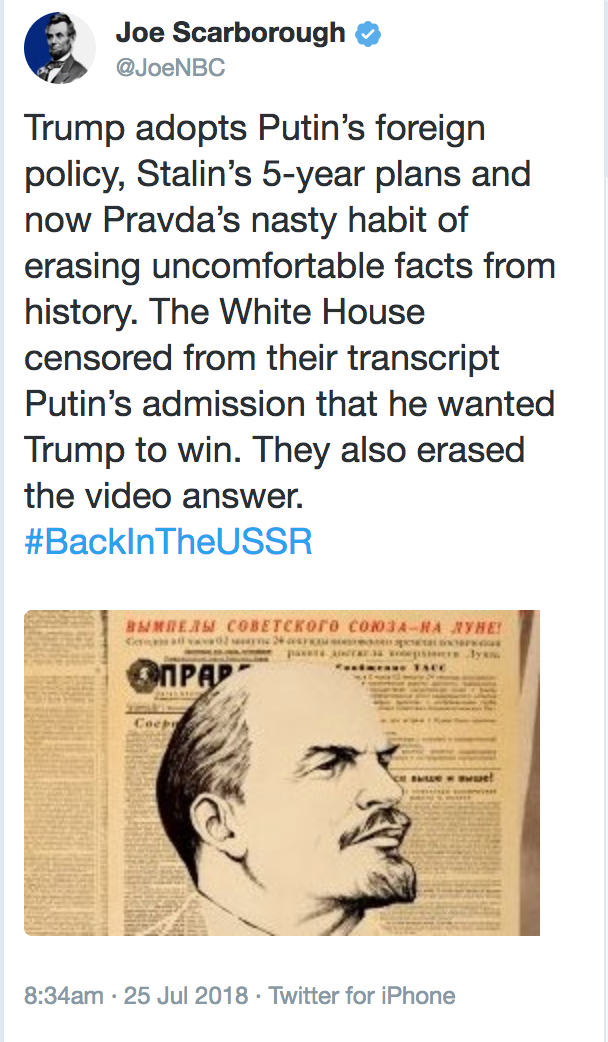 Daily Caller News Foundation reporter Peter Hasson pointed out Scarborough’s error to him, prompting the pundit to acknowledge his mistake and update his claims — but not before deleting the original post.

Thanks for the heads up, bruh. Correcting now. https://t.co/NxDKAjAw1r

Turns out the White House DID NOT edit out the Putin question, based on this updated analysis of the audio and video feeds by the WPost. If you can’t follow the technical parts, just read the concluding line. Now maybe he can drop Putin’s foreign policy. https://t.co/dWr6RkMWkD

The Washington Post’s national correspondent, Phillip Bump, wrote the article headlined: “No, the White House didn’t intentionally edit a question to Putin out of a video.”

“At some point in the middle of that question, there’s a switch between the feed from the reporters and the feed from the translator,” Bump wrote. “In the White House version of the video, you can hear the question being asked very faintly under the woman who is translating saying ‘president.'”

“This is not a conspiracy from the White House,” he concluded.