While some want to blame global warming for the uptick in catastrophic wildfires, Zybach said a change in forest management policies is the main reason Americans are seeing a return to more intense fires, particularly in the Pacific Northwest and California where millions of acres of protected forests stand.

“We knew exactly what would happen if we just walked away,” Zybach, an experienced forester with a PhD in environmental science, told The Daily Caller News Foundation.

Zybach spent two decades as a reforestation contractor before heading to graduate school in the 1990s. Then the Clinton administration in 1994 introduced its plan to protect old growth trees and spotted owls by strictly limiting logging. 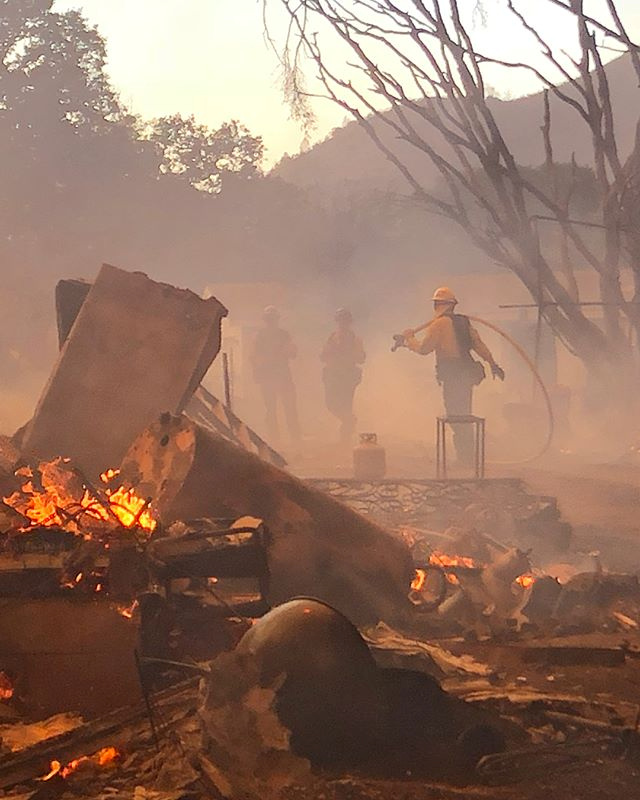 Firefighters work to battle a wildfire in an area near Mendocino National Forest, California, August 4, 2018 in this picture obtained from social media. Beverly Hills Firefighters/via REUTERS

Zybach told Evergreen magazine that year the Clinton administration’s plan for “naturally functioning ecosystems” free of human interference ignored history and would fuel “wildfires reminiscent of the Tillamook burn, the 1910 fires and the Yellowstone fire.”

Between 1952 and 1987, western Oregon only one major fire above 10,000 acres. The region’s relatively fire-free streak ended with the Silver Complex Fire of 1987 that burned more than 100,000 acres in the Kalmiopsis Wilderness area, torching rare plants and trees the federal government set aside to protect from human activities. The area has burned several more times since the 1980s.

“Mostly fuels were removed through logging, active management — which they stopped — and grazing,” Zybach said in an interview. “You take away logging, grazing and maintenance, and you get firebombs.”

Now, Oregonians are dealing with 13 wildfires engulfing 185,000 acres. California is battling nine fires scorching more than 577,000 acres, mostly in the northern forested parts of the state managed by federal agencies.

The Mendocino Complex Fire quickly spread to become the largest wildfire in California since the 1930s, engulfing more than 283,000 acres. The previous wildfire record was set by 2017’s Thomas Fire that scorched 281,893 acres in Southern California.

While bad fires still happen on state and private lands, most of the massive blazes happen on or around lands managed by the U.S. Forest Service and other federal agencies, Zybach said. Poor management has turned western forests into “slow-motion time bombs,” he said.

“If we can’t manage our forests, what the hell?” Zybach told TheDCNF. 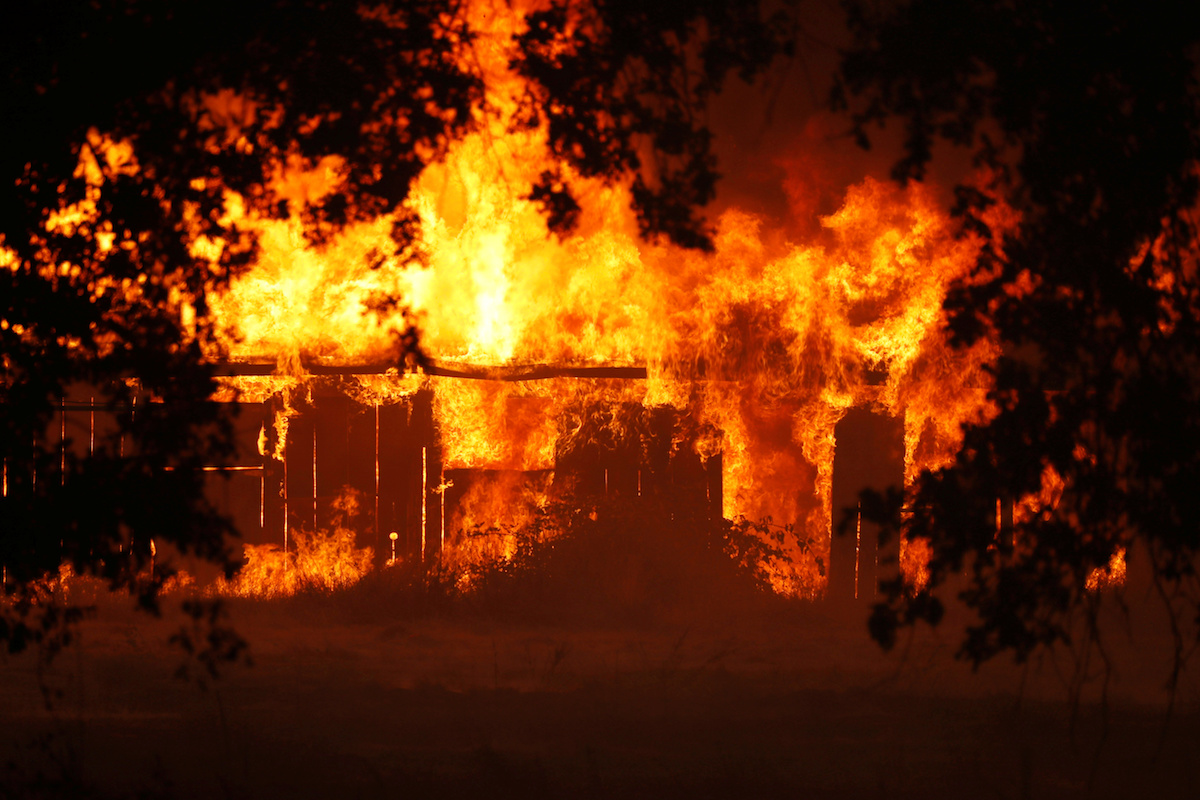 A structure burns out of control in the River Fire (Mendocino Complex) in Lakeport, California, July 31, 2018. REUTERS/Fred Greaves

Is It Global Warming?

The rash of massive fires has reignited the debate over how best to handle wildfires. Experts agree that a century of fire suppression caused forests to become overgrown and filled with dead wood and debris that easily ignites in dry summer heat.

However, there’s disagreement over whether or not global warming has exacerbated western wildfires. Some scientists, those often quoted in the news, link global warming to a longer wildfire season and more intense heat.

California Democratic Gov. Jerry Brown said bigger wildfires were part of a “new normal” because of global warming. People will just have to adapt to it, the governor said while touring the destruction left by the Carr Fire.

But attributing wildfires to man-made warming is trickier than many scientists let on given the myriad of factors that determine the intensity of fires.

“Global warming may contribute slightly, but the key factors are mismanaged forests, years of fire suppression, increased population, people living where they should not, invasive flammable species, and the fact that California has always had fire,” University of Washington climate scientist Cliff Mass told TheDCNF.

Mass also noted there hasn’t been much warming in the Pacific Northwest, adding that natural weather patterns in California prime the state for wildfires every year no matter what. 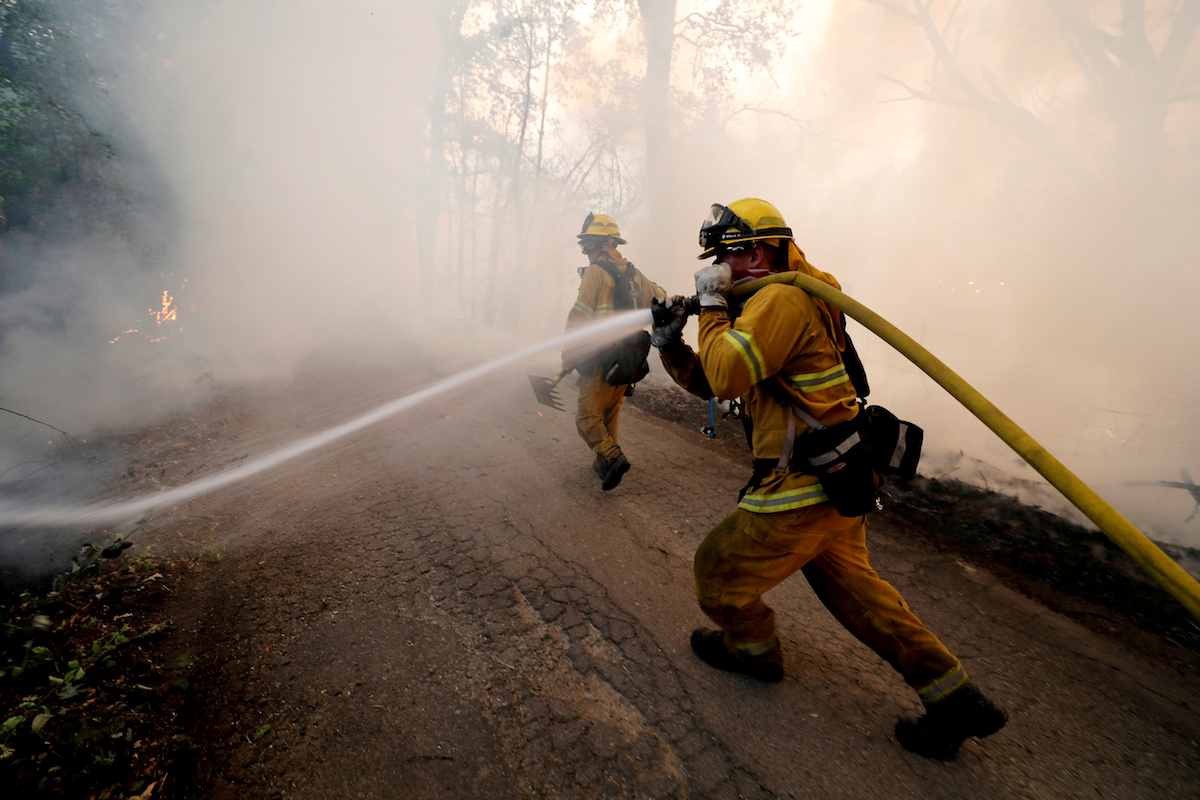 A firefighter knocks down hotspots to slow the spread of the River Fire (Mendocino Complex) in Lakeport, California, July 31, 2018. REUTERS/Fred Greaves/File Photo

“To say there’s been another change, other than management, is just grasping at straws,” Zybach said.

What has changed is land management. For example, declines in timber production on federal lands, particularly in the Northwest, not only meant the death of a once vibrant industry, but also an end to thinning, controlled burns and other activities meant to keep forest growth in check.

Wildfire experts have also increasingly been pointing to the fact that more people and infrastructure are located in wildfire-prone areas than in the past, increasing the risk of wildfires impacting livelihoods.

A recent study found the number of homes at risk of wildfires in the western U.S. increased 1,000 percent since 1940, from about 607,000 in 1940 to 6.7 million. Since most fires are ignited by humans, the more people in fire-prone areas the higher the risk.

“This is a people problem,” said U.S. Geological Survey fire expert Jon Keeley. “What’s changing is not the fires themselves but the fact that we have more and more people at risk.”

The Klondike Fire is one of several fires raging in southern Oregon, igniting more than 30,000 acres of protected forest and covering nearby towns with smoke and ash.

The nearby Taylor Fire has engulfed more than 41,000 acres, including protected woods. Officials are worried the two fires could combine.

The Klondike and Taylor fires are the fourth and fifth major blazes to burn through the Rogue River-Siskiyou National Forest since 1987 when the Silver Complex Fire burnt up more than 100,000 acres.

The Siskiyou National Forest encompasses 1.8 million acres in northern California through southwestern Oregon. The park also encompasses the Kalmiopsis Wilderness, which was created by Congress in 1964 to protect the rare plant life in the region.

However, before the Silver fire, you have to go back to the 1930s to find a comparable fire, according to Forest Service figures. Fires are labeled “complex” when two or more combine.

Oregon, like much of the western U.S., was ravaged by massive wildfires in the 1930s during the Dust Bowl drought. Megafires were largely contained due to logging and policies to actively manage forests, but there’s been an increasing trend since the 1980s of larger fires.

Active management of the forests and logging kept fires at bay for decades, but that largely ended in the 1980s over concerns too many old growth trees and the northern spotted owl. Lawsuits from environmental groups hamstrung logging and government planners cut back on thinning trees and road maintenance.

Zybach said Native Americans used controlled burns to manage the landscape in Oregon, Washington and northern California for thousands of years. Tribes would burn up to 1 million acres a year on the west coast to prime the land for hunting and grazing, Zybach’s research has shown.

What Will Trump Do?

In a recent tweet, Interior Secretary Ryan Zinke blamed the “overload of dead and diseased timber in the forests makes the fires worse and more deadly.” the secretary called for more active management of forests to reduce fuel loads.

Fires across the west are burning hotter and more intense. The overload of dead and diseased timber in the forests makes the fires worse and more deadly. We must be able to actively manage our forests and not face frivolous litigation when we try to remove these fuels.

President Donald Trump signed legislation in March to prevent federal agencies from using forest management funding to pay for fire suppression, but that’s only a partial fix. Federal agencies need to be given more flexibility to clear forests of debris and lessen fuel loads.

The Forest Service planned to treat and clear more vegetation and harvest more timber than in 2017 to prevent fuel build-up. But that’s only happening on a fraction of the 193 million acres managed by federal foresters. Zybach said more needs to be done to get fuel loads down and reduce wildfire risks.

“It would make our forests safe and beautiful again and would create jobs,” Zybach said.