Reports painting Flint’s lead problems as a crisis skyrocketed after former Secretary of State Hillary Clinton used the town as a primary campaign talking point during her run for president, according to a Daily Caller News Foundation analysis.

The volume of news coverage discussing elevated lead levels in the town spiked after Clinton discussed elements of the scandal during a Jan. 17, 2016, Democratic debate in South Carolina. Toxicology experts worry the reporting blew the problem out of proportion, especially as data showed Flint’s lead levels were not exceptionally high.

Clinton’s comments and former President Barack Obama’s decision to declare a state of emergency in the town generated droves of media content characterizing Flint as a small town poisoned by lead. She ripped Michigan Republican Gov. Rick Snyder for allegedly dragging his feet on the matter. “Every single American should be outraged,” Clinton said.

Reports on the lead in the town’s water exploded following Clinton’s debate.

The Wall Street Journal, for instance, published a post Jan. 19, 2016, explaining how Flint Mayor Karen Weaver elevated the matter further — she praised Clinton for being the only candidate who contacted her directly and for bringing media attention to the city’s plight.

The New York Observer noted Weaver depicted Clinton as “a fighter” who would be the “friend in the White House” the impoverished city needed. Media sophisticates, activists and even some politicians crafted narratives during and after the presidential campaign depicting Flint as a town the U.S. left behind.

“The residents of Flint consumed this poisonous water, knowing that something was wrong because of its changing colors and smells, but mostly unaware of just how dangerous it was,” Blow wrote in a Jan. 21, 2016. editorial. “An entire American city exposed to poisoned water. How could this be?” Researchers are now questioning that narrative two years after Clinton’s debate.

Data Show Flint’s Lead Levels Were Not At Crisis Levels

Most of the alleged crisis transpired after officials switched the small eastern Michigan city’s water supply from Lake Huron in 2014 to the Flint River. The state applied the wrong regulations and standards for drinking water during the switch. The mistake resulted in corroded pipes, which leached lead into the town’s drinking water. Flint’s lead levels went unnoticed until a pair of scientific studies in late 2015 showed significant levels of contamination were present.

“The numbers in Flint didn’t compute. They were being horribly exaggerated,” Hernán Gómez, an associate professor at the University of Michigan, and medical toxicologist at Hurley Medical Center, told TheDCNF. Blood lead levels (BLL) are no higher in Flint than in other cities across Michigan, said Gómez, who describes himself as a political moderate without an ideological ax to grind.

“We have no evidence that permanent brain damage has occurred,” making it unfair and inaccurate “to paint the Flint situation” in a way that suggests lead is poisoning children, he added. Gómez and Kim Dietrich, a professor of epidemiology at the University of Cincinnati College of Medicine, wrote an editorial in The New York Times in July pushing back against the media’s depiction of Flint as a crisis that resulted in the destruction of an entire generation.

Data do indeed show the switch did not result in a catastrophe. The Centers for Disease Control and Prevention (CDC) considers a BLL in children of 5 micrograms per deciliter (µg/dL), and higher to be a “reference level.” The annual percentage of Flint children whose BLLs rose above the reference level increased from 2.2 percent to 3.7 percent, a relatively small uptick given actual lead levels, according to research Gómez published in June in The Journal of Pediatrics. 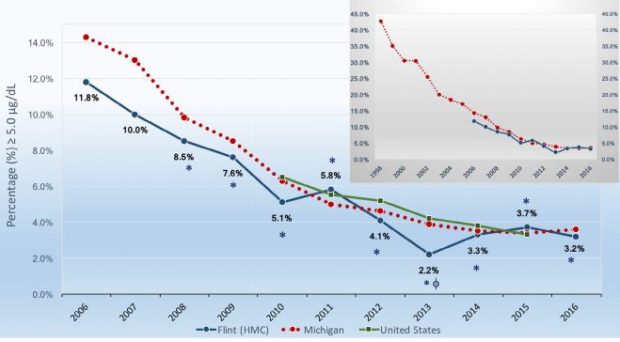 Hernán Gómez graph in Journal of Pediatrics on blood lead levels in Flint.

These numbers are small relative to previous decades. The average toddler during the 1970s, for instance, had a BLL of 14 µg/dL, a number three times higher than the reference level. Those numbers fell to 0.84 µg/dL by 2014 following a government ban on lead in paint and gasoline in 1971. Children with blood lead levels of 5 µg/dL or higher dropped in Flint from 11.8 percent in 2006 to 3.2 percent in 2016. CDC recommends treatment for people with BLLs at or above 45 µg/dL.

There is not an agreed-upon safe level of lead in drinking water. But people should put elevated lead levels in context and expect governmental bodies to take the proper precaution, Gómez said. What the media and people shouldn’t do is make a moral panic out of something that is not a crisis, he added.

“In my view, media survives through attracting people’s interests. I think the media saw that it was a great story,” he noted before listing nine states in the country with children who have a higher BLL across the value range than in Flint. “The word poisoned is simply not accurate,” he said. Gómez is not the only academic criticizing the media’s treatment of Flint.

“You’d have to literally ignore the data to come to the conclusion that many media outlets did,” Alex Berezow, a science writer with a microbiology doctorate from Washington University, told TheDCNF. “When people were told not to drink the water, they did that. The only crisis was that the water was messed up – so, what crisis? The public health departments worked as they should.”

Berezow also noted that citizens in other locals across the country suffered higher BLLs than those in Flint. There are roughly 3,810 areas in the U.S. where levels stand at twice as that of Flint. But most of those communities are not above the danger zone, according to the CDC. Data show high rates of BLLs include in Savannah, Georgia, areas in Rutland, Vermont, near the popular skiing mountain Killington and in areas of Brooklyn.

“Every time something like this happens — data is ignored, and some data get used as a political football. Something catastrophic happened. Whatever the cause, the result was nothing. The actual story is not very interesting,” Berezow said of stories involving contaminated water. Reports painting Flint as a no-man’s land also attempted to find a culprit. (RELATED: It’s Been Two Years And Hillary Clinton’s Flint Water Program Is Still Missing In Action)

The National Association for the Advancement of Colored People (NAACP) filed a lawsuit against Michigan Republican Gov. Rick Snyder in May of 2016 alleging the Republican failed to detect a problem with the city’s water supply. The group accused Snyder and other state officials of negligence and inflicting distress, as well as violating the EPA’s Safe Drinking Water Act.

Another Michigan official — Nick Lyon, the director of Michigan’s Department of Health and Human Services – is facing involuntary manslaughter charges stemming from the water switch. Lyon is accused of failing to alert the public about the town’s elevated lead levels in a timely manner, prosecutors argue. The case stems from the 2014 Legionnaires’ disease outbreak in Flint, which killed 12 people and sickened 79.

Clinton’s Campaign Capitalized On The Narrative

The money was eventually directed toward the Community Foundation of Greater Flint, which received more than $22 million in contributions and grants in 2016 and $3 million in 2015, according to the charity’s tax documents. Pritzker and his wife contributed at least $14.7 million to two super political action committees supporting Clinton’s White House bid, federal records show.

Pritzker has not responded to repeated questions from TheDCNF about the so-called Flint Water Works initiative, and Clinton has not returned requests for a statement about the initiative or her role in ratcheting up Flint’s water contamination to fevered pitch. (RELATED: Billionaire Responsible For Sketchy Clinton-Flint Program Has A Few Skeleton’s In His Closet)

How The Flint Phenomenon Affected The Trump Administration

The media circus also pushed the Trump administration into focusing like a laser beam on policy targeting elevated lead levels in drinking water. Former EPA Administrator Scott Pruitt told lawmakers in February that he wanted their help with what he called the agency’s “war on lead.”

Pruitt told lawmakers in the Senate Environment and Public Works Committee that “investing in infrastructure challenges to eradicate lead in our drinking water within a decade should be a goal of this body and, I think, the goal of this administration.” He accused Obama of being too preoccupied with climate change to focus on elevated lead levels.

Public health officials argue reducing exposure to lead in drinking water requires a large-scale operation to replace 7 million to 11 million lead water lines, a Herculean effort that would cost $30 billion. There are several factors that would prevent the EPA and other regulators from eradicating lead from drinking water.

Utilities are legally responsible for removing lead pipes that run from main supply lines to the edge of a private property line. Municipalities have struggled to help residents pay for the private-side of lead pipe removals but are themselves stymied by state utility laws. Lead would likely still leach into drinking water even if all those ruffles were smoothed out.

Lead solder was still used on non-lead plumbing until 1986, and pipes that were legally considered “lead-free” were allowed to have up to 8 percent lead until 2014, even though most lead pipes across the country saw their usage dramatically curtailed during the late 1960s. Modern “lead-free” pipes can legally contain up to 0.25 percent lead.