Left-wing nonprofit groups that orchestrated disruptions during Brett Kavanaugh’s Supreme Court confirmation hearings likely violated IRS rules, which can result in their loss of tax-exempt status, according to an investigation by The Daily Caller News Foundation.

TheDCNF listened in on a conference call Monday where organizers for three groups behind the protests called on activists to continue their “civil disobedience” as part of their efforts to “shut down” Monday’s upcoming confirmation proceedings.

These activist organizations — which include Women’s March, the Center for Popular Democracy and Housing Works — provided cash for the post-and-forfeits to protesters who didn’t show up with their own money before they faced arrest for their conduct, CPD Action national field organizer Darius Gordon and Housing Works national advocacy coordinator Paul Davis both said on Monday’s call.

More than 200 activists connected with #CancelKavanaugh, a movement organized by the three groups, were arrested for disrupting Kavanaugh’s confirmation hearings in early September, and the organizers said they plan to continue its near-constant disruptions of future Senate confirmation proceedings.

Women’s March, Center for Popular Democracy Action (CPD Action) — both 501(c)(4) social welfare organizations — and Housing Works, a 501(c)(3) charitable organization, took ownership of the disruptions and the arrests of more than 200 activists between Sept. 4 and Sept. 7.

“If you do not have access to your cash we will certainly be able to arrange to get it to you before the action,” Davis said, noting that they had done so at previous anti-Kavanaugh protests.

Women’s March senior adviser Winnie Wong previously told CNN that her organization provided the anti-Kavanaugh protesters with “a script where we suggest certain messaging that may resonate more.”

Wong told CNN her group raised more than six figures in the first two days of Kavanaugh’s hearings, funds that were used to provide travel, accommodation, legal training and bail for its members who engaged in illegal activity.

But organizing such conduct isn’t allowed under IRS rules and is “incompatible with charity and social welfare,” according to IRS rules. Ruling 75-384 “holds that an organization … that planned and sponsored protest demonstrations at which members were urged to commit acts of civil disobedience did not qualify for IRC 501(c)(3) or (4) exemption,” the IRS states in a document detailing activities that would bar organizations from tax exemption.

A top campaign finance lawyer and conservative activist, Cleta Mitchell, believes the nonprofit groups’ tax-exempt status should be scrutinized for their involvement in advocating and funding criminal activity.

“These groups should lose their tax-exempt status because of these actions, which are in violation of established IRS precedent,” Mitchell told TheDCNF.

“If these groups were actually financing illegality, their tax-exempt status most certainly could be in jeopardy,” Berke said.

Some activists who wished to partake in the #CancelKavanaugh disruptions filled out a sign-up form that specifically asked whether they were willing to “participate in civil disobedience/risk arrest.”

Another question asked applicants to provide their date of birth if they planned to engage in “civil disobedience.” Organizers on Monday’s call emphasized that minors were discouraged from participating in the illegal actions, although they left open the possibility of a future civil disobedience event “specifically designed for people under 18.” 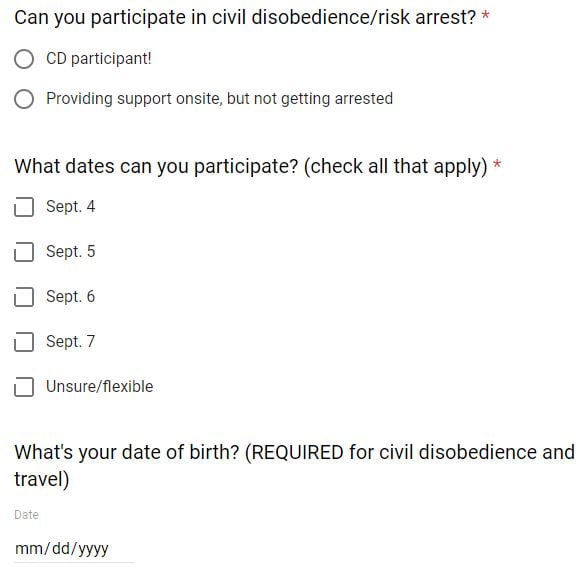 #CancelKavanaugh sign-up form asked applicants if they were willing to engage in civil disobedience. (Google Forms/Screenshot)

Upon filling out the form, applicants were then asked to donate funds to CPD Action and Housing Works for the stated purpose of getting more protesters on site at Kavanaugh’s hearing. 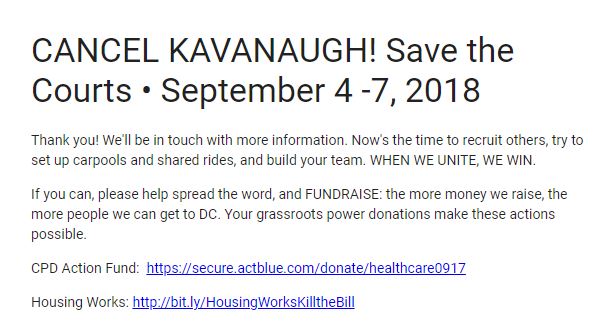 Housing Works is a charity that receives tax-deductible donations and raked in nearly $4.2 million in federal and New York state funding in 2017 alone, according to its most recent tax return.

“In addition to the IRS rules that they have violated, these groups should lose any government funding they receive — taxpayers should not be subsidizing bail money for people hired by these groups to break the law,” Mitchell told TheDCNF.

“There are no doubt many rules and regulations which they have violated for grantees in receipt of federal funds,” she added. “They should be required to return the funds to the U.S. Treasury and be permanently barred from receiving additional federal funds.”

Regardless, some experts were skeptical the IRS will take meaningful action in enforcing the law.

“The general principle is tax-exempt organizations, like any organization, can’t deliberately violate the law. By definition, when you engage in civil disobedience you’re going out to violate the law,” Indiana University professor Leslie Lenkowsky, who’s an expert in nonprofits and public policy, told TheDCNF.

“However, an organization could walk up to the line very closely, with respect to civil disobedience, while also claiming that it really didn’t ask these people to do it,” he said. “‘We were happy they did, but we’re not doing it as agents of this particular organization,’ the defense might be. That’s the kind of hair-splitting we’re going to see.”

Former IRS Commissioner Mark Everson, who ran the service from 2003 to 2007, declined to comment specifically on this case but said the IRS has frequently not given enough attention to oversight of the tax-exempt sector.

“If the IRS sees clear indicators that there are problems, then they need to be looked at,” Everson, who’s now the vice chair of the Alliant Group, told TheDCNF, while stressing that enforcement of the law must be nonpartisan.

An even-handed approach toward enforcing the law does not mean the IRS should abandon its responsibilities surrounding tax-exempt enforcement, Everson added.

“The IRS must not abandon its responsibilities in this area,” he said. “Otherwise, we will rapidly get to the point where anything goes, and that’s in nobody’s interests.”

All three organizations did not return requests for comment.