Chinese officials claimed Tuesday that their internment camps used for the communist and Chinese cultural indoctrination of Uighur Muslims were actually centers for “vocational training.”

The UN reports Chinese authorities have detained approximately 1 million Uighurs, Kazakhs and other predominantly Muslim minorities in the camps.

Those who have been forced into one of the internment camps claimed authorities made them recant their Muslim beliefs in favor of the doctrines of the Chinese communist party, while authorities have placed children of detainees in orphanages, according to The Associated Press. (RELATED: China Jailing Even Mild Critics Of Its Crackdown On Muslims)

“No amount of spin can hide the fact that the Chinese authorities are undertaking a campaign of systematic repression,” said Amnesty International of Beijing’s claims.

Beijing’s Tuesday statement comes as China’s latest attempt to defend its practices in the face of mounting criticism from the West.

The camps are an integral part of implementing Chinese President Xi Jinping’s policy of “sinicization” — the effort to make all Chinese citizens and religions within the country assimilate to a singular view of Chinese culture, which in this case means submission to the state, the Chinese communist party, as well as the cultural trappings of the Han ethnic group. 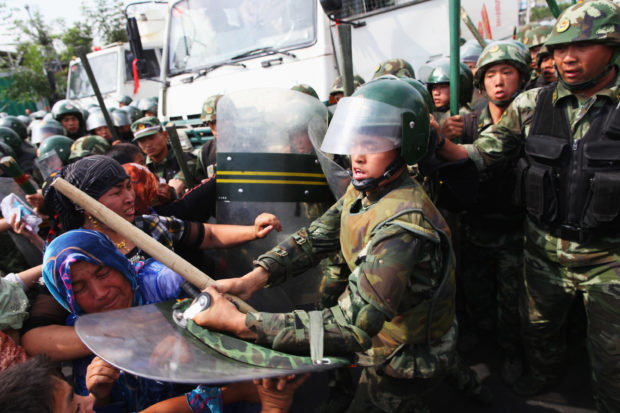 URUMQI, CHINA – JULY 07: Chinese policemen push Uighur women who are protesting at a street on July 7, 2009 in Urumqi, the capital of Xinjiang Uighur autonomous region, China. Hundreds of Uighur people have taken to the streets protesting after their relatives were detained by authorities after Sunday’s protest. Ethnic riots in the capital of the Muslim Xinjiang region on Sunday saw 156 people killed. Police officers, soldiers and firefighters were dispatched to contain the rioting with hundreds of people being detained. (Photo by Guang Niu/Getty Images)

Detainees in the camps are reportedly not only pressured to abandon Islamic practices, but are also instructed to speak Mandarin and learn Chinese history and law. Ethnic minorities can be detained in a camp for openly engaging in Islamic practices, such as Islamic prayers, fasting, having an “abnormal” beard or visiting foreign websites and communicating with relatives outside of China.

“They’re superstitious, they’re deviant, they’re potentially dangerous,” James Leibold of Melbourne’s La Trobe University said of Beijing’s view of Central Asian ethnic minorities, according to The Associated Press. “The role of the party-state is to bring them into the light of civilization, to transform them.”

Shohrat Zakir, governor of the Uighur majority Xinjiang region in China, echoed that view, saying the aim of the camps is to usher Muslims toward a modern way of life, in order to develop a “foundation for completely solving the deeply-rooted problems” in the area.

“It’s become a general trend for them to expect and pursue a modern, civilized life,” Zakir said.

Omurbek Eli, a businessman who says he was held in on of these camps in 2017, told The New York Times his camp was a “prison.”

“They’re full of nonsense,” Eli told TheNYT. “They say that these camps are to eradicate terrorism, but inside I saw lawyers, doctors, intellectuals, even officials who had nothing to do with extremism.”

“They call these vocational training centers, but it was really a prison.” 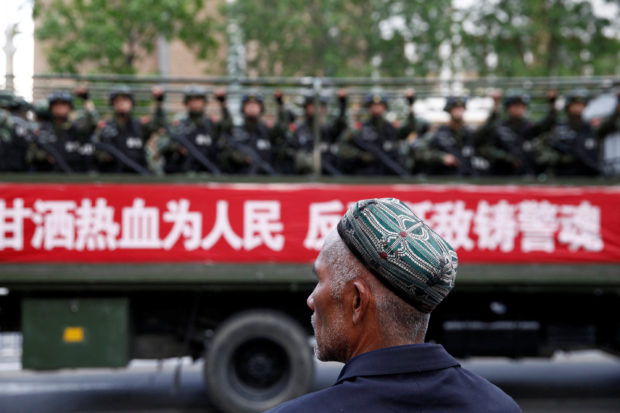 FILE PHOTO: A Uighur man looks on as a truck carrying paramilitary policemen travel along a street during an anti-terrorism oath-taking rally in Urumqi, Xinjiang Uighur Autonomous Region, China May 23, 2014. The Chinese characters on the banner read, “Willingness to spill blood for the people. Countering terrorism and fighting the enemies is part of the police spirit.” REUTERS/Stringer/File Photo

Zakir claimed the amenities at the camps were top-quality, including “nutritious, free diets,” air conditioning, showers and athletic and cultural activities.

Testimony from detainees like Omir Bekali contrast with Zakir’s claims. Bekali said he was kept in a locked room in which he and eight other people were forced to share beds and one toilet and rarely allowed to bathe. He also said detainees were forced to chant, “Thank the party! Thank the motherland!” before eating.

Maya Wang, senior China researcher at Human Rights Watch, said Beijing’s justifications of the internment camps “illustrate what the ‘rule of law’ in China means — that the party bends it to its will and uses it as a weapon against perceived political enemies.”