A woman who lost a world-championship cycling race to a biological male who identified as a transgender woman criticized the result as unfair.

Jennifer Wagner said it was “definitely NOT fair” that she was forced to compete against Rachel McKinnon, the male cyclist, in the women’s event.

“I was the 3rd place rider. It’s definitely NOT fair,” Wagner wrote on Twitter Monday in response to a comment about the race. (RELATED: Biological Male Wins World Championship In Woman’s Cycling) 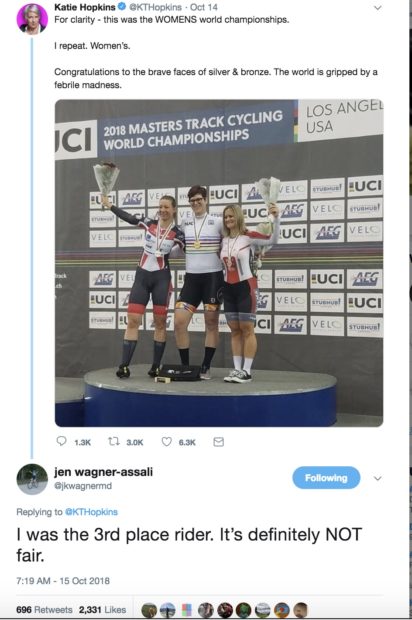 Allowing biological males who identify as transgender women to compete in women’s athletic events has been a contentious subject, as critics have argued that it puts the female competitors at an inherent disadvantage.

“No one is a transgender to steal anyone’s medal. We had an honest race under [Union Cycliste Internationale] rules. If you compete you accept the rules, otherwise, don’t compete,” van Herrikhuyzen wrote in response to a Twitter commenter.

“I can only imagine what she had to go through in her life to be where she is now, how hard it is to fit in,” she added.

Wagner replied: “Just because it’s a CURRENT UCI rule doesn’t make it fair or right. And rules can be changed.”

McKinnon, a professor at the College of Charleston, accused Wagner of “transphobia” for her opposition to racing against men.

“I think there is absolutely no evidence that I have an unfair advantage,” McKinnon said in an interview with VeloNews.