The late physicist Stephen Hawking used his final book, published Thursday, to declare to the masses that there is no God or divine will.

Hawking intended the book to provide definitive answers to the questions that he faced most often in life, according to his family members and colleagues who helped complete the book after his death. A self proclaimed atheist, he took a negative view of the concept of God, due in part to his struggles with Lou Gehrig’s Disease, and thought of natural law in opposition to his understanding of divine law. (RELATED: SCIENCE: Your Pious Hypocrisy Is Gonna Make Your Kid An Atheist) 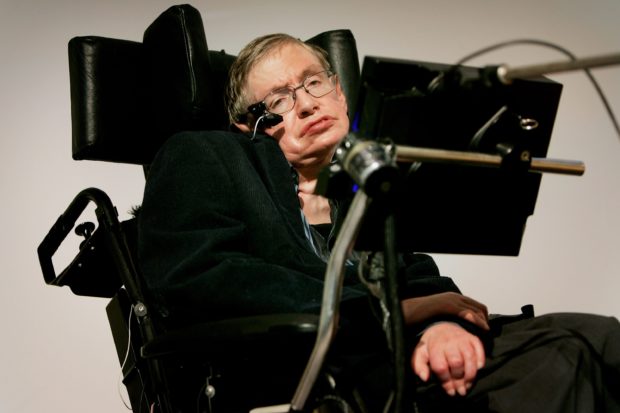 LONDON – JANUARY 17: Professor Stephen Hawking delivers his speech at the release of the ‘Bulletin of the Atomic Scientists’ on January 17, 2007 in London, Ebgland. A group of scientists assessing the dangers posed to civilisation have moved the Doomsday Clock forward two minutes closer to midnight as an indication and warning of the threats of nuclear war and climate change. (Photo by Bruno Vincent/Getty Images)

He died in March at age 76 while writing the book.

“There is no God. No one directs the universe,” Hawking wrote, according to CNN.

“For centuries, it was believed that disabled people like me were living under a curse that was inflicted by God,” he continued. “I prefer to think that everything can be explained another way, by the laws of nature.”

Hawking’s rejection of God hardly comes as a surprise, as he was critical of religion throughout his life. He did not, however, rule out the possibility of extraterrestrial life.

“There are forms of intelligent life out there,” Hawking wrote. “We need to be wary of answering back until we have developed a bit further.”

He cautioned against advancing too quickly in technology, especially with regard to artificial intelligence, which he posited would one day become superior to humanity. He also claimed that traveling backward in time is theoretically possible and that interstellar travel to anywhere in the galaxy will one day be a reality.

While Hawking was renowned for his scientific authority, religious leaders often criticized him for what they asserted was his faulty philosophy and poor understanding of religious beliefs concerning God and how they relate to science.

“The ‘god’ that Stephen Hawking is trying to debunk is not the creator God of the Abrahamic faiths who really is the ultimate explanation for why there is something rather than nothing,” said Denis Alexander, director of The Faraday Institute for Science and Religion in 2010, according to CNN.

“Hawking’s god is a god-of-the-gaps used to plug present gaps in our scientific knowledge,” he added. “Science provides us with a wonderful narrative as to how [existence] may happen, but theology addresses the meaning of the narrative.”