An increased number of high school students are unprepared for college coursework as math scores drop to a 14-year low, according to an annual ACT study released Wednesday.

The Condition of College and Career Readiness 2018 found 40 percent of the more than 1.9 million 2018 high school graduates who took the test were meeting math benchmarks. This is down from 41 percent in 2017 and 46 percent in 2012, according to the report.

The ACT is a college entrance exam that tests in math, science and English with an optional writing section and is graded on a scale of 1 to 36. The benchmarks are the minimum scores that a student needs to obtain in each section to be considered college-ready.

The benchmark scores for both math and reading was 22, science a 23 and English at 18, Ed Colby, ACT senior director of media and public relations, said in an email to The Daily Caller News Foundation.

The average math score fell to 20.5, according to the report. English also saw a drop from 65 percent of students meeting the minimum score in 2017 to 60 percent in 2018. 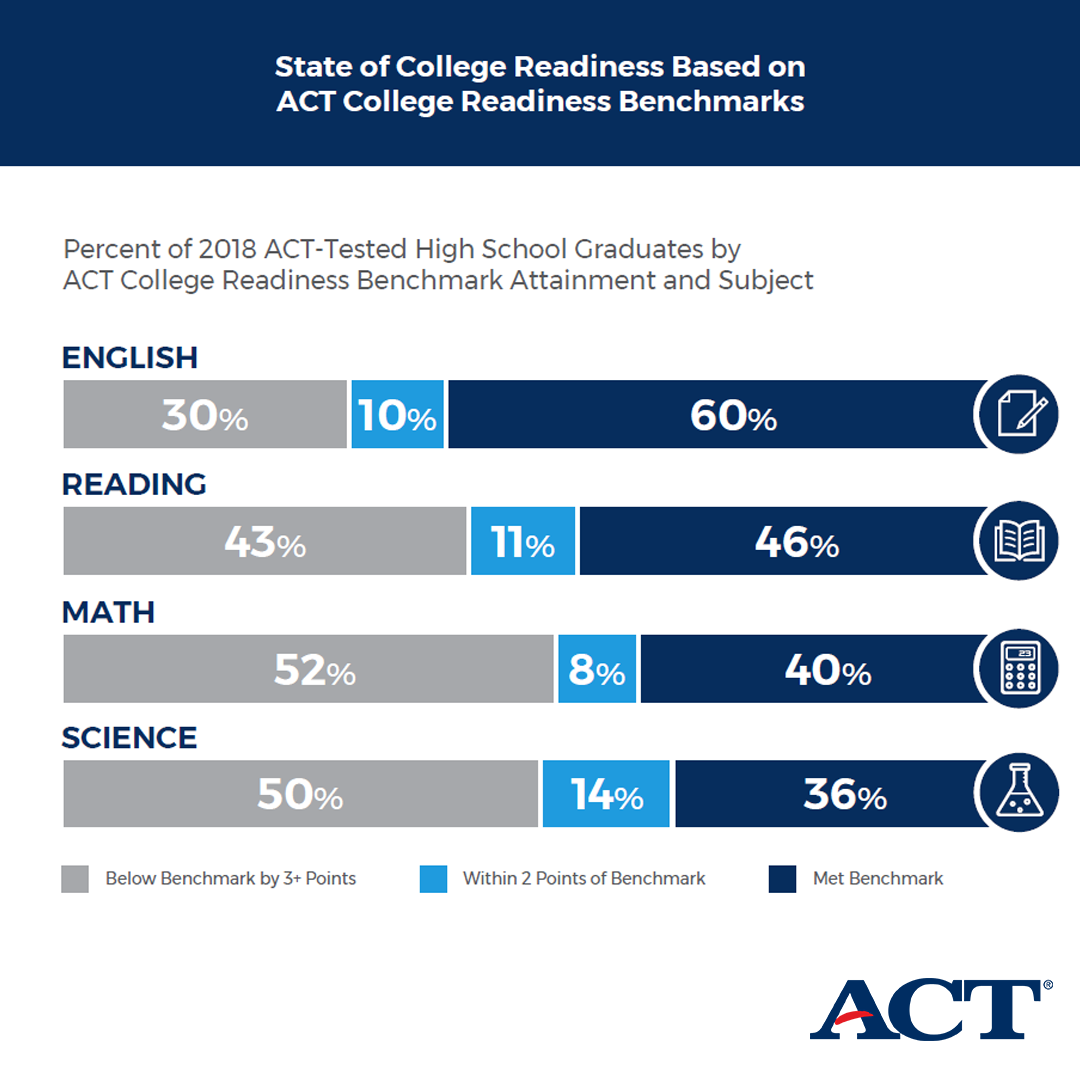 “The negative trend in math readiness is a red flag for our country, given the growing importance of math and science skills in the increasingly tech-driven US and global job market,” ACT CEO Marten Roorda said in the report.

The report also found 35 percent of 2018 graduates did not meet any of the benchmark scores. Asian-American students saw an overall increase in their average composite scores compared to 2017, while other racial/ethnic groups saw overall slightly lower scores, according to the ACT. (RELATED: Harvard Dean Defends Race-Based Admissions On First Day Of Trial)

“There were 91,899 graduates who reported their race/ethnicity as Asian,” Colby said to TheDCNF.

The ACT has recommended early assessment and intervention to help students overcome weaknesses.

“One big step we can take is to make sure that our learning resources are designed in a way that is more personalized and better fits this generation’s way of consuming information,” ACT CEO Marten Roorda said in the report.

ACT officials said students were not taking enough challenging courses in school when they saw students struggling with math and science scores in 2004. The average math score in 2004 was 20.7, according to a 2004 ACT press release obtained by TheDCNF.

“One major reason why many students lack college-level skills in math and science is that too few are taking challenging coursework in high school,” the 2004 press release said. “Fewer than two-thirds (62%) of ACT-tested graduates in the class of 2004 took the recommended core coursework for college-bound students — at least four years of English and three years each of mathematics (algebra and higher), natural sciences and social sciences.”