A Sunday morning panel on CNN’s “New Day” responded to the growing number of public incidents involving protesters and lawmakers, claiming, “there are bad people on both sides.”

Host Victor Blackwell framed the segment by playing video of House Minority Leader Nancy Pelosi being confronted by anti-communist protesters, saying, “Heckling is not reserved to one party. We saw this on both sides.”

The Weekly Standard’s Kelly Jane Torrance agreed, but suggested that the balance was a bit more lopsided than some wanted to admit.

There are bad people on both sides as I just said, but it is true that I do think we are seeing a bit more of this coming from the left. Now, can you blame Democrats for it? … You have had a couple of people, not many, but a couple of people encouraging such behavior. Maxine Waters as President Trump likes to remind people saying ‘you got to go where they live and you got to go where they eat and you can’t stop’ … I think a lot of people have taken that seriously.

Brian Stelter, host of CNN’s “Reliable Sources,” weighed in as well, addressing those on both side of the aisle who have called for civility. 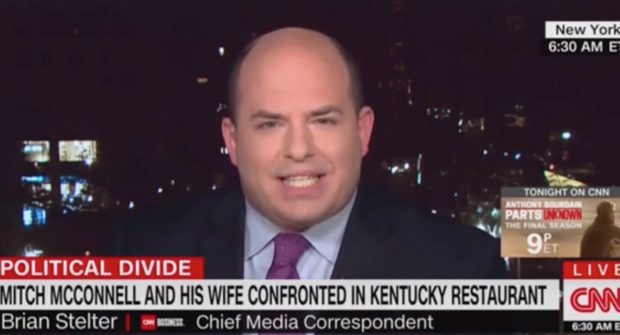 Turning the argument back to President Trump, Stelter said, “I think the problem with the core of this conversation is that we are living through an age of incivility led by President Trump.”

Stelter also invoked the Tea Party — suggesting that Trump was hypocritical to attack Democrats now if he wasn’t critical of conservative protests — but made no mention of the fact that conservative protesters had never confronted Democrats in stores or restaurants, disrupting their meals or driving them out of public places. (RELATED: Here Are The People Who Called The Tea Party The ‘M-Word’ — Or Worse)

“The problem for the Democrats is that there is no person with equal stature,” Stelter continued. “Nobody as loud or effective as President Trump to push back on his ‘jobs not mobs’ rhetoric. It’s also propaganda, and he’ll say it over and over again until Election Day … We are seeing examples of this extreme behavior on both sides.”