A Georgia Tech student is suing Republican Sen. David Perdue, alleging that the senator committed battery by allegedly mistakenly taking the student’s phone after being asked for a photograph.

Perdue returned to his alma mater on Oct. 13 to campaign for Georgia Secretary of State Brian Kemp who is running for governor on the Republican ticket. While taking pictures on campus with supporters, a group of students affiliated with the Young Democratic Socialists of America (YDSA) approached the Georgia senator and filmed the scene.

Today @sendavidperdue visited Tech to campaign for Kemp. A student tried asking a simple question about @BrianKempGA ‘s racist scheme to threaten voter registrations from black people, but before he could even finish the question, Perdue stole his phone. pic.twitter.com/K0iffU57Di

The Georgia senator quickly gave the phone back to the student, who thanked him and said:

Perdue’s office promptly refuted the student’s claim that he “snatched” the phone to avoid answering questions. Rather, the office contended the senator took the phone after being asked to take a picture and returned it immediately after realizing that was not what the student wanted. (RELATED: Protesters Shout Down David Perdue While He’s In The Bathroom, He Fires Back)

A witness to the exchange corroborated Perdue’s account, noting that the YDSA students asked Perdue to take a picture with them, reported The Atlanta Journal-Constitution. The student who shot the video footage also admitted that it was edited by stitching together two separate videos. However, he claimed not to have removed any parts of the exchange.

“Georgia Democrats have taken their extreme tactics too far,” a spokesman for Perdue told The Daily Caller News Foundation. “This complaint is complete nonsense and lacks any merit whatsoever. All you have to do is look at the political hacks who are trying to spin something out of nothing.”

The civil suit was filed on Monday by the Atlanta-based law firm Dreyer Sterling, LLC, according to Law & Crime. The two attorneys representing the student, David Dreyer and Michael Sterling, have histories of involvement in Democratic politics.

Dreyer is a Democratic Georgia state representative — he has both volunteered and donated to Stacey Abrams’ campaign, who is running on the Democratic ticket against Kemp. Sterling, who is also an active Democrat, previously launched an unsuccessful mayoral bid in Atlanta. He was part of former President Barack Obama’s administration after Attorney General Eric Holder appointed him as an assistant U.S. attorney in the Northern District of Illinois. 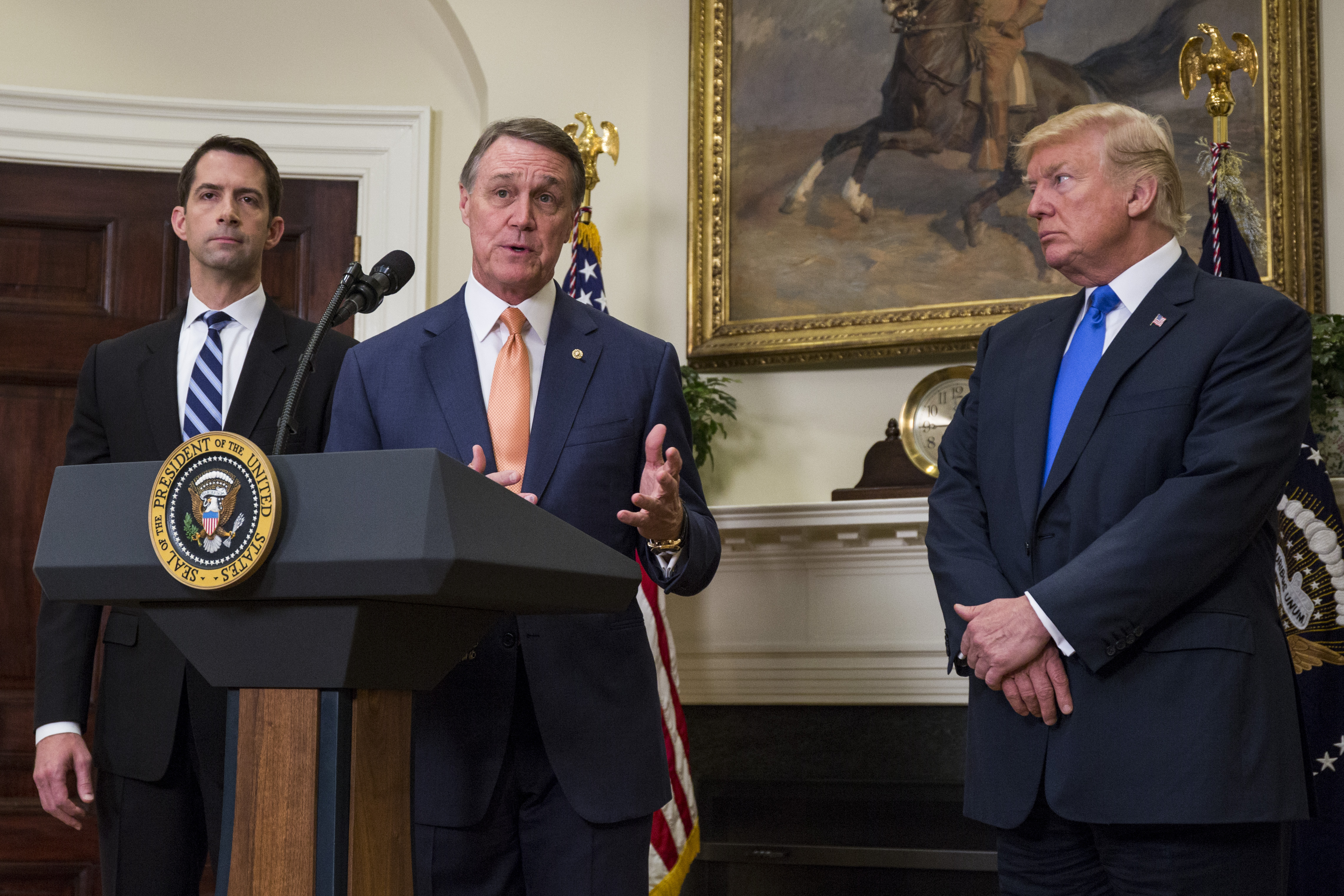 WASHINGTON, DC – AUGUST 2: (AFP OUT) Sen. David Perdue (R-GA) makes an announcement on the introduction of the Reforming American Immigration for a Strong Economy (RAISE) Act in the Roosevelt Room at the White House on August 2, 2017 in Washington, DC. The act aims to overhaul U.S. immigration by moving towards a “merit-based” system. Also pictured are Sen. Tom Cotton (R-AR) left, and U.S. President Donald Trump, right.(Photo by Zach Gibson – Pool/Getty Images)

The lawsuit alleges “suddenly and without warning, Senator Perdue committed unlawful battery when he seized [the student’s] phone, touching [the student] in the process of seizing the phone, while angrily declaring: ‘No, I’m not doing that.'”

“This is being orchestrated by a former Obama operative and current Democrat state representative who spends most of his time campaigning for Stacey Abrams. Georgians will see this for what it is – a manufactured setup to embarrass the Senator and attack his credibility two weeks before the midterm elections,” the spokesman continued. “Instead, Democrats are embarrassing themselves with a frivolous case that will only waste the court’s time.”