“To Kill A Mockingbird,” a book about a man accused of and imprisoned for rape — despite the novel’s protagonist providing evidence to the contrary — is America’s “best-loved” novel, even in the #MeToo era.

Harper Lee’s Pulitzer Prize winner, first published in 1960, tells the story of Atticus Finch, who defends Tom Robinson, a black man accused of raping a white woman in Alabama during the 1930s. Rape at the time was a capital offense, and while Finch presents compelling evidence of Robinson’s innocence, the all-white jury convicts him anyway. Robinson is eventually killed while trying to escape prison.

Other books in the top 10 include the “Outlander” series, the “Harry Potter” series, “Pride and Prejudice,” “The Lord of the Rings,” “Gone with the Wind,” “Charlotte’s Web,” “Little Women,” “The Chronicles of Narnia” and “Jane Eyre,” according to PBS.

The rankings were based off a survey of about 7,200 Americans who nominated their favorite novel for “The Great American Read.” A panel of experts then narrowed the list to the top 100 books. Authors were limited to one book or series.

“To Kill A Mockingbird” has come under scrutiny in the past and present as being too controversial for schoolchildren. School districts in Minnesota, Virginia and elsewhere have supported banning the book from the classroom because it is said to be racially insensitive due to the book’s numerous racial slurs.

A school district in Mississippi received complaints about the book and its place in an eighth-grade class as well.

It “makes people uncomfortable,” said Kenny Hollowoy, the vice president of the Biloxi School Board, the Sun Herald reported in October 2017.

Finch has also been cited by those who worry that #MeToo has sacrificed the right of due process and replaced it with the idea that all sexual assault accusers should automatically be believed. For some, the confirmation hearings for Justice Brett Kavanaugh represented the danger of allowing an accusation to be sufficient evidence of wrongdoing.

“We all remember that Atticus Finch was a lawyer who did not believe that a mere accusation was synonymous with guilt. He represented an unpopular person, who many people presumed was guilty of a heinous crime because of his race and his race alone. We could learn from Atticus Finch now during this time when there has been such a vicious and unrelenting attack on the integrity and good name of this nominee,” Texas Republican Sen. John Cornyn said during a floor speech Oct. 4 during the Kavanaugh hearings. 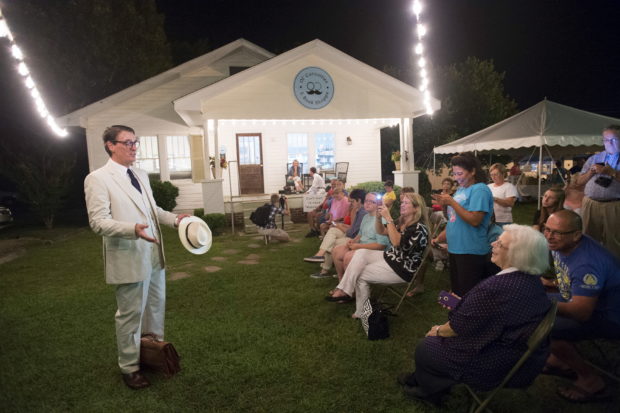 Eric Richardson portraying Atticus Finch performs to the large crowd gathered to buy “Go Set A Watchman” at Ol’ Curiosities & Book Shoppe in Monroeville, Alabama July 13, 2015. In the southern hometown of author Harper Lee, a freight truck unloaded the first of 7,000 copies of “Go Set a Watchman” at a small bookshop just ahead of midnight, minutes before Tuesday’s release of Lee’s first published novel in 55 years. REUTERS/Michael Spooneybarger

Finch was voted most inspiring literary character in a poll of 2,000 British readers in 2016, The Guardian reported.

The PBS poll comes about a week before Aaron Sorkin’s theatrical adaptation of the book is set to premiere on Broadway.