Supporters of a campaign to nix California’s unpopular gas tax law are promising to recall the state’s Democratic attorney general for supposedly attempting to mislead voters who oppose the law.

“Voters who wanted to vote YES on Prop 6 have been deceived into voting NO – all because the Attorney General bowed to special interest pressure to remove the words ‘Gas Tax Repeal Initiative’ from the ballot and replace them with an intentionally false and deceptive title,” said Carl DeMaio, chairman of Yes on Prop 6, said in a press statement Monday.

DeMaio presented what he believes is evidence showing the change was designed to torpedo the repeal effort. (RELATED: Governor Brown’s Move To Hike California’s Gas Taxes Could Doom Dems As Elections Approach)

He pointed to a recent Survey USA Poll showing 58 percent of California voters supported repeal while only 29 percent would vote no. The numbers change when voters are read the initiative as it currently titled, according to DeMaio. A Thomas Partners Strategies poll taken during the same period as Survey USA showed Prop 6 tied – 35 percent no to 35 percent yes.

Supporters of the initiative say their threat to recall is credible given their successful effort to remove former state Sen. Josh Newman from office earlier this year over his support for gas tax. State politicians cannot change the ballot title on a recall election as the ballot will simply read “Should Xavier Becerra be recalled from the office of Attorney General?” DeMaio said.

The law, passed April 6, imposes a 12 cents per gallon (cpg) hike on citizens and raises the tax on diesel fuel by 20 cpg. It also implements an additional charge to annual vehicle license fees ranging from $25 to $175 depending on the car’s value. It has not gained in popularity since its passage. 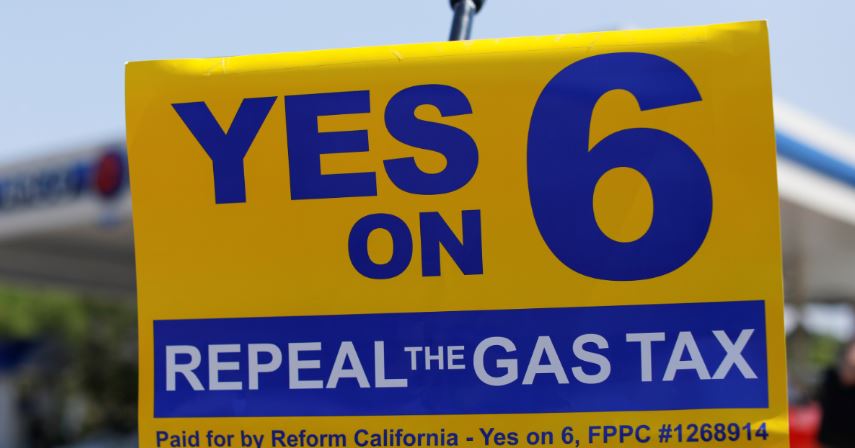 A California Proposition 6 six sign is shown as the growing movement to repeal a state gas tax holds an event at an Arco Gas station in San Diego, California, U.S. July 11, 2018. REUTERS/Mike Blake

Nearly 58 percent of voters oppose the tax increase, including 39 percent who say they strongly reject the legislation, according to a survey UC Berkeley’s Institute of Governmental Studies conducted shortly after the measure was passed in June of 2017. Only 35 percent of voters surveyed favor the law, which raises taxes on gasoline and diesel and hikes vehicle registration fees to fix roads and highways.

Voters in all major regions of the state other than the Bay Area and all age categories over 30 are unhappy about it. Liberal voters are the only group that largely supports the law. Other polls are more split. More than 47 percent of likely voters favor repeal, while 48 percent oppose nixing the law, according to a poll the Public Policy Institute of California released in February.

“We don’t respond to publicity stunt,” Roger Salazar, a spokesman for the Becerra campaign, told The Daily Caller News Foundation.  He noted that DeMaio has yet to fill out an intent to engage in a recall election.