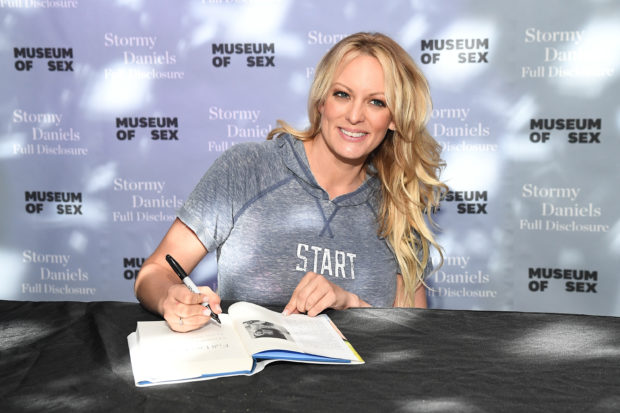 In a Monday court filing obtained by the Washington Examiner, the president’s lawyers are asking for $341,559.50 from the high-profile adult film actress and sometime author. Daniels alleged she had a steamy affair with Trump, which the president denied. (RELATED: Judge Dismisses Stormy Daniels’ Suit Against Trump)

The lawsuit alleges that Daniels “filed this action, not because it had any merit, but instead for the ulterior purposes of raising her media profile, engaging in political attacks against the president by herself and her attorney, who has appeared on more than 150 national television news interviews attacking the President and now is exploring a run for the presidency himself in 2020.” (RELATED: Stormy Daniels Arrested For Letting Customers Touch Her)

Daniels’ lawyer, Michael Avenatti, reacted to Trump’s filing with outrage, telling the Washington Examiner, “This is a number created out of whole cloth. And it is nothing compared to what he will owe my client from the main NDA case.”

U.S. District Judge James Otero threw out Daniels’ defamation lawsuit that was all based on a Twitter statement from Trump that called a drawing of an assailant alleged to have attacked Daniels, a “total con job.”

1
Black Firefighter Spent His Life Savings To Open A Bar. Then Minneapolis Looters Burned It Down
US
2
DOJ Backs Michigan Businesses Against Whitmer's 'Arbitrary And Irrational Restrictions'
Politics
3
Owner Of Gutted Minneapolis Shopping Mall Tells Governor And Mayor: ‘People Will Uprise’ Over Riots And Looting
US
4
2 Killed During Protests In Oakland, Detroit Over Police Death Of George Floyd
US
5
DC Mayor Accuses Trump Of 'Hiding Behind His Fence' From 'Peaceful Protesters'
Politics