The U.S. Border Patrol is warning Texans along the Mexican border of “armed civilians” who may try to stop the migrant caravan from entering the United States.

U.S. Customs and Border Protection press secretary Corry Schiermeyer told The Daily Caller Wednesday that “the intent of the email sent by one of the Border Patrol Landowner Liaison’s in the Rio Grande Valley was to provide the landowners … a point of contact in case they encounter media or any unauthorized individuals on their respective properties … ”

Schiermeyer emphasized that the border patrol liaison team is there “to preserve national security … [and to]  maintain positive relationships with landowners to foster communication and transparency regarding border security issues.”

The comment from Schiermeyer confirms a report in the Associated Press, that potential vigilantes could position themselves as civilian reinforcements for the border patrol and National Guard personnel already waiting for the caravan. (RELATED: Lindsey Graham Tells Mexico Caravan Threatens Trade Deal) 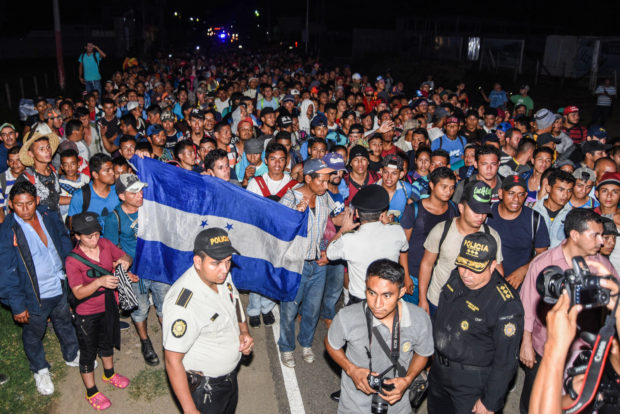 Honduran migrants taking part in a new caravan heading to the US, arrive to Chiquimula, Guatemala, on Oct. 22, 2018. (Photo by ORLANDO ESTRADA/AFP/Getty Images)

Some are worried by the potential for vigilante action against the caravan migrants in an atmosphere that is already volatile. (RELATED: DHS Secretary Says Troops Aren’t Planning To Shoot At Caravan Migrants)

The AP has been receiving reports of armed groups promising to be at the border when the migrants arrive, with one telling the media agency that it is “imperative that we have boots on the ground.”

President Trump tweeted Monday that “This is an invasion of our Country and our Military is waiting for you!”

The president has ordered 5,200 soldiers to reinforce the border patrol.

Armed militia members are a common sight along the Texas-Mexico border, where it appears very difficult for the official border patrol to keep track of all the illegals who often cross into the United States at sparsely populated areas. If the militias detect an illegal crossing, they generally inform the regular border patrol.

Ann Beams, a supporter of Rick McLaren’s “Republic of Texas”, has her car searched by Police officers on her way back home, as she crosses the police roadblock on Davis Mountains, Texas. (Photo: HECTOR MATA/AFP/Getty Images)

Some Arizona landowners, in particular, are not enthusiastic about militias intervening in the border conflict and potentially creating an incident. According to the Arizona Republic, one resident has erected a sign telling the militia to stay away because she “wants everybody to be aware that we do not want the militias.”

Other residents are actively encouraging the militias by raising money to buy equipment.