Thousands of economic migrants are part of the caravan of Central Americans currently marching toward the southwest border, and immigration experts are concerned their dubious asylum claims could make it harder for legally valid applicants to get their own cases approved.

In interviews with reporters traveling with the caravan, many migrants plainly admit they are traveling to the U.S. in search of work or to live with relatives already here. Their explanations confirm research showing a majority of immigrants from Guatemala and Honduras go to the U.S. primarily for economic reasons, not because they are fleeing violence.

The caravan is only the most recent public display of a larger phenomenon that has seen hundreds of thousands of individuals and families from Central America attempt a perilous overland journey through Mexico in order to petition for asylum in the U.S. Nearly all of them are seeking an escape from extreme poverty and violence in their home countries.

A lack of economic opportunity at home has long driven most immigration — legal and illegal — to the U.S. from Latin America, but it cannot serve as a basis for asylum. Under the Refugee Act of 1980, an asylum applicant must meet the definition of a refuge, which is someone who is “persecuted or [fears] they will be persecuted on account of race, religion, nationality, and/or membership in a particular social group or political opinion.”

Even those Central American migrants who are fleeing violence don’t usually qualify for asylum because they are most often victims of gangs or domestic abuse, not necessarily state-sanctioned persecution on the basis of a protected class. Past immigration court decisions had allowed certain victims of domestic violence to claim asylum as members of a particular social group, but Attorney General Jeff Sessions overturned that precedent in a legal opinion in June.

Most Central American asylum seekers didn’t qualify for asylum even before Sessions moved to tighten the standards, a fact reflected in especially high denial rates for applicants from the region. Between 2012 and 2017, the asylum denial rate was 79 percent for El Salvador, 78 for Honduras and 75 percent for Guatemala, according to Syracuse University’s Transactional Records Access Clearinghouse. 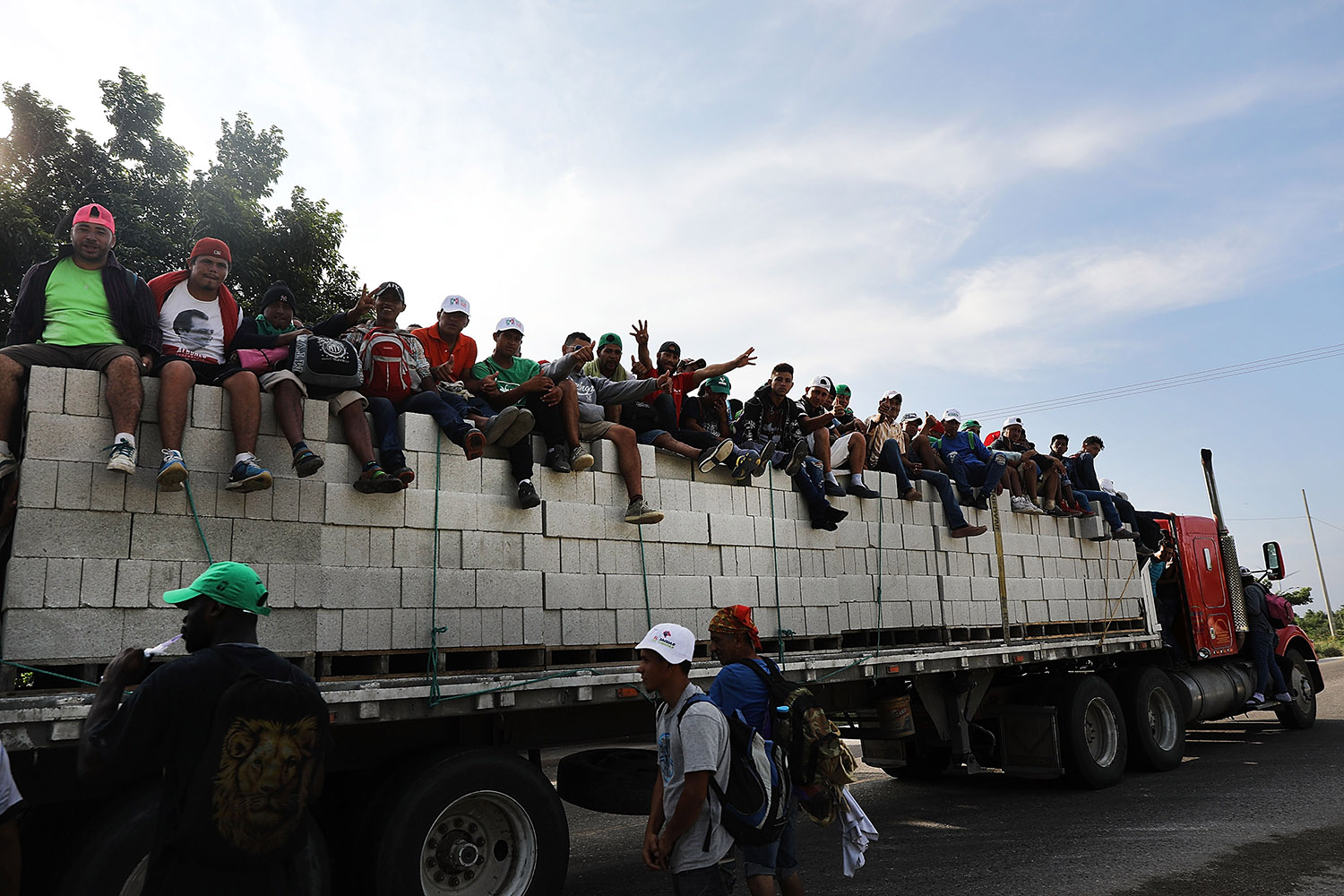 Some of the thousands of Central American migrants in the caravan get a lift to a camp for the evening on October 30, 2018 in Juchitan de Zaragoza, Mexico. (Photo by Spencer Platt/Getty Images)

While Central Americans have some of the lowest asylum grant rates, they still have high pass rates in their credible fear interviews, which is the first step in the asylum process. An applicant who is found to have a credible fear of persecution is allowed to remain in the U.S. pending an immigration court date, often several months in the future. Asylum seekers can be detained during the process, but they are more often paroled into the U.S. due to a lack of available detention space.

Because the credible fear standard is lower than the asylum standard, many applicants are able to move on in the process even if there is a slim chance an immigration judge will grant them asylum down the road, according to U.S. Citizenship and Immigration Services (USCIS) spokesman Michael Bars.

“For asylum seekers arriving at the border, in order to pursue their claims in Immigration Court, they must first meet a low credible fear screening standard that is defined by statute as a ‘significant possibility … that the alien could establish eligibility for asylum’ under immigration law,” Bars told The Daily Caller News Foundation. “Essentially, the individual must simply show there is a ‘possibility of a possibility’ that they could qualify.”

The overall pass rate for credible fear interviews was 76 percent in fiscal year 2018, and it was more than 90 percent for members of an earlier migrant caravan that arrived at the border in April, according to USCIS. But only about one-in-five of these recent arrivals will receive a favorable asylum determination, if past denial rates hold. (RELATED: DHS Data Shows How Long-Shot Asylum Claims Become A Ticket To Stay In The US)

The disparity between the bar for credible fear and the bar for asylum leads to a profusion of what immigration lawyers refer to as “non-meritorious” asylum claims, says Andrew Arthur, a resident fellow at the Center for Immigration Studies.

These claims — where a petitioner passes a credible fear interview but falls short of the legal standard for asylum — “[delay] the period of time to get to those good claims,” Arthur, a former immigration judge, told TheDCNF. “That’s the biggest issue when talking about the asylum process — bad cases that drown out the good ones.”

As an example, Arthur describes a hypothetical Chinese dissident in the U.S. who has applied for asylum at roughly the same time as thousands of new arrivals from Central America or Mexico. By having to compete with their non-meritorious claims, the dissident is penalized twice — first by having to wait longer for his own case to play out, and then by not being able to petition for family members who are also being persecuted by the government.

To address the problem, USCIS in January moved to a “last in, first out” (LIFO) approach to processing asylum claims. Under the LIFO system, the newest cases are reviewed first, with priority given to rescheduled interviews and cases pending 21 days or fewer.

The idea behind the shift was to identify fraudulent and non-meritorious asylum claims earlier in the process. That would allow immigration authorities to pare down the asylum backlog, which hit more than 300,000 cases earlier this year, by placing ineligible applicants into removal proceedings faster than before.

“Delays in the timely processing of asylum applications are detrimental to legitimate asylum seekers,” USCIS Director L. Francis Cissna said at the time. “Lingering backlogs can be exploited and used to undermine national security and the integrity of the asylum system.”

USCIS says it has been able to reduce the asylum backlog in the months since the changes were implemented. In May, the agency completed more asylum cases than it received — the first time it had done so in several years.

But the continuing wave of asylum seekers from Central America is straining the government’s capacity to work through the backlog and reduce wait times, which hit an average of about six months this summer. After declining in FY2017, credible fear referrals increased in FY2018 to a level that exceeded the previous historic high set in 2016, according to USCIS figures.

“The problem is that this isn’t helped by the caravans and the unprecedented surge in asylum claims across the board in past years which requires [us] to divert resources to the border instead of working to process petitions and ultimately reduce the backlog,” an administration official told TheDCNF on the condition of anonymity.

“The threshold for a credible fear determination is so low, broad and often times ambiguous that most of them are referred to [immigration court] and released on promise to appear for a court date,” the official added.