The poll, published Thursday, showed Stefanowski had a net gain of 3.8 percentage points, due mainly to the fact that more voters are making set decisions about their preferred candidates as election day draws nearer. While Stefanowski has gained a lead among likely voters, Sacred Heart clarified that the overall data indicated “a statistical tie” between Lamont and Stefanowski. (RELATED: Connecticut’s Republican Governor Makes The Case For Flipping The State In The Midst Of A Tight Race) 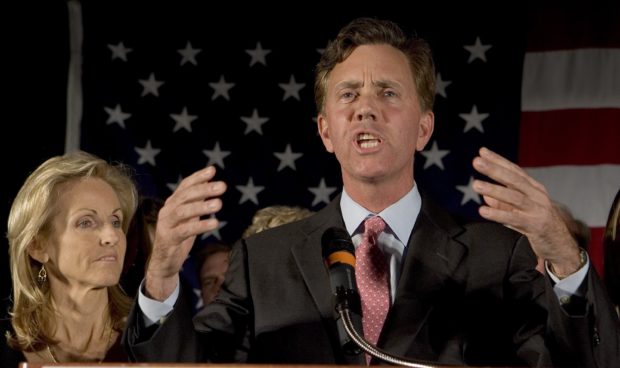 MERIDEN, CT – NOVEMBER 7: Democratic candidate Ned Lamont along with his wife Annie (L), concedes the election to Sen. Joseph I. Lieberman (D-CT) at the Sheraton Four Points Hotel November 7, 2006 in Meriden, Connecticut. In a highly divisive campaign, Lamont ran against Lieberman, a three-term Democratic incumbent who lost the party primary in August forcing him to run as an independent. (Photo by Bob Falcetti/Getty Images)

Still, Stefanowski appears to be gaining some momentum while Lamont is shown to have polled less favorably with certain demographics than in previous months.

The poll showed 38.4 percent of Connecticut voters have a “favorable” view of Lamont compared to 40.8 percent who have an “unfavorable view” of him.

Lamont’s October favorability rating among women of 50 percent took a major dip to 40.8 percent. He also continues to lag behind in support among male voters, with a rating of 34.4 percent, while Stefanowski’s approval rating among males holds steady at 45.2 percent.

Democrats hope to maintain trifecta control of Connecticut, which they have had since 2011 with Democratic Gov. Dannel Malloy, with the office of the governor and majorities in the state’s Senate and House of Representatives. History, however, is not on their side, as Connecticut has not elected a governor of the same political party as the outgoing governor since 1924, BallotPedia reports.

Sacred Heart conducted its latest poll among likely voters from Oct. 29 to 31.