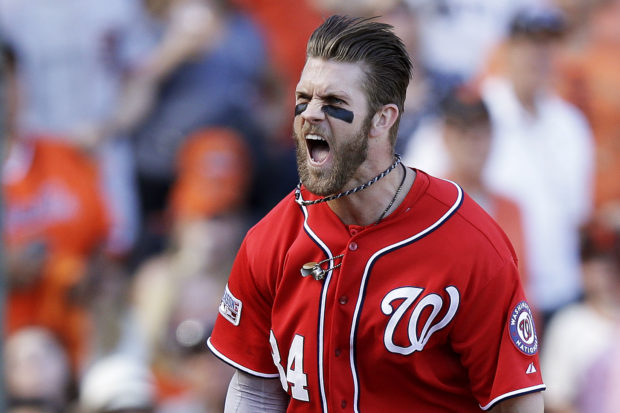 SAN FRANCISCO, CA – OCTOBER 06: Bryce Harper #34 of the Washington Nationals celebrates after scoring on a throwing error by Madison Bumgarner #40 of the San Francisco Giants in the seventh inning during Game Three of the National League Division Series at AT&T Park on October 6, 2014 in San Francisco, California. (Photo by Ezra Shaw/Getty Images)

The Nats knew that they had to make the 26-year-old a breathtaking offer in order for him to forgo his free-agent eligibility.  Harper, however, decided to spurn the team’s offer and test the MLB’s free agency market.

Despite the team’s failure to proactively lock Harper up, General Manager Mike Rizzo confirmed that the Nats will continue to pursue their former asset.

“We’ve had conversations, and we utilized our exclusivity to negotiate with him late in the season through when he became eligible to sign with a team,” Rizzo said, according to ESPN. “We didn’t get anything done, but he’s a guy that is near and dear to us and we are not closing any doors.”

In the event that Rizzo is unable to reach an agreement with Harper and his agent Scott Boras, the Nationals will likely be starting Juan Soto, Adam Eaton and Victor Robles in the outfield, USA Today reports.

Amongst the list of other teams that are expected to pursue the former MVP are the Philadelphia Phillies, San Francisco Giants and St. Louis Cardinals.