Prominent sellers of American flags are peddling U.S. flags that are made in China while misrepresenting and mislabeling their wares, according to laboratory test results and other research.

A trade association said the flags are being sold illegally and has requested the Federal Trade Commission (FTC) launch an investigation.

Take VSVO Flag Company, whose website says, “We believe in selling only the highest quality American made flags … Many of our best customers are military men.” It encourages Americans to “support our troops” by buying from the company.

“The inspiration behind our flag company is my father,” its Amazon listing says. “He is a veteran and growing up as a child I looked up at him with pride for what he did for our country. I created this company to honor him and, people like him who love and serve their country.”

But it also includes poor English: “We only produce embroidery flag.” And the Weston, Florida, address listed on its website is simply a UPS mailbox.

Testing by two labs determined that VSVO’s unlabeled flags are made of polyester that’s consistent with a common Chinese material, and not American-made nylon. (RELATED: Trump’s Trade Policies Do Not Clash With East Africa’s Development)

When The Daily Caller News Foundation called the phone number listed on VSVO’s website, the person who answered the phone said he did not know who owned the company and did not know the manager’s name.

“They break the law by not labeling product with Country of Origin and material content,” it continued. The “flags do not have Country of Origin label attached,” which “violates the Textile and Wool Act,” it said.

The law requires the tags to state the type of material and place of manufacture, just as clothes do.

The association also called for a 300-percent tariff on foreign-made American flags.

Two textile manufacturers, Glaser Mills and Schneider Mills, separately conducted tests on flags from VSVO, Jetlifee and G128, and both concluded that the material was not nylon, but 200 denier, 60-by-60 thread count polyester that typically comes from China. TheDCNF also examined the flags after they were tested, and none had the required tags on them.

The testing also included holding the grommets against magnets. Many were magnetic, which means they’re not brass, as advertised. The testers also found that the images shown on Amazon are not pictures of the actual flags. 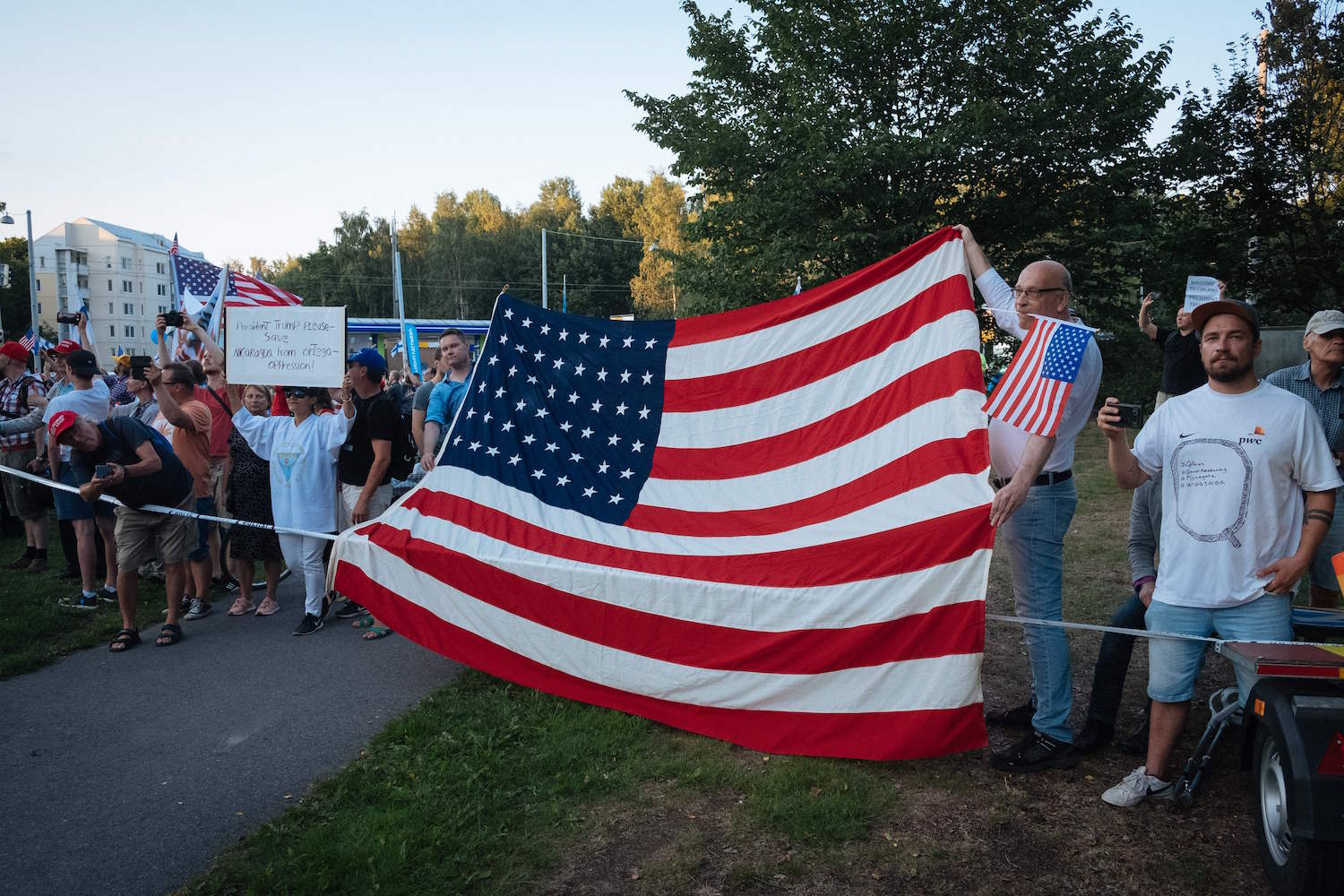 Anley, a popular flag-seller on Amazon, says, “Founded in 2006, Anley Flags has rapidly grown from a local flagmaker in El Monte, California to a national Top-Rated brand.”

“It is time to show your American pride,” the listing says. It claims the flag is “Made of Durable Heavyweight Nylon Material That’s Water Resistant to Help Withstand Windy Outdoors. Don’t Buy Those Paper Thin Polyester Flags That Will Be Torn Off Within A Week!”

But tests by the FMAA determined it was, in fact, polyester. And when TheDCNF reached out for comment, it received an email response from “Bill,” whose email software used Chinese as its default language.

About half the reviewers on Amazon gave the product five stars. One reviewer said, “the flag lasted about 4 months before it started to fray. This was supposed to be a heavy duty nylon flag, however there is no materials tag on it and it is very thin.”

The flag became listed as unavailable on Amazon after FMAA members raised the issue.

Jetlifee bills itself as owned by a “highly-rated veteran of the US Navy.” The Department of Veterans Affairs listed the company as a certified veteran-owned business, eligible for preference in federal government contracts — though it has not received any government contracts.

VA data shows the company has only two employees and that Jetlifee is another name for Julichain, a logistics company for Chinese goods.

In Amazon reviews, customers praised Jetlifee’s flag for being made in the U.S., but one noted that he found a “Made in China” sticker.

The company’s owner, Jet Li, told TheDCNF his flags are made in China and that he has not claimed otherwise. He said he does sell smaller flags made in the U.S., which may have led to confusion.

“I advertised on Amazon Ad that it is 330D nylon because the supplier told me so,” Li said.

“I realized that there are things we need to improve,” he added after being sent FTC links.

Li told TheDCNF he is a first-generation American and provided paperwork showing he served as a cook on a Navy ship for 18 months.

ATHX‘s Amazon listing says “AMERICAN PRIDE – Our American flag construction is original. Don’t fall victim to ‘Cheap Knock Offs’. You will be amazed at the quality of this deluxe heavyweight nylon oxford flag!”

But the ad also claims the flag was made by Jetlifee, and a reviewer said, “it has no country of origin tag on it or its packaging.”

The listing says it is made out of “240D nylon.” VSVO says its flag is made of “300D Nylon Built for Outdoor Use,” and Jetlifee says “our USA flag is made of 330D HEAVYWEIGHT NYLON specially treated to dry fast.”

This is virtually impossible, Mike Glaser of Glaser Mills told TheDCNF. He said Glaser Mills does not sell flags, but supplies nylon to virtually all of the U.S. flag manufacturers who do not have their own textile mills.

“If it says 210D and it’s not made in the USA, it’s definitely polyester, definitely China,” Glaser told TheDCNF. He said Chinese manufacturers, perhaps due to translation issues, sometimes seem to think “nylon” — the standard textile for U.S. flags — is just a word that can describe polyester.

Glaser said the sellers of Chinese-made U.S. flags broke into the market after Sept. 11, 2001, when demand surged.

“They’re all these tiny little LLCs, based in a house in the middle of Illinois etc., all coming from the same factory in China,” he said.

Yet the high profit margins that come from their deceptive listings allow Chinese suppliers to spend more heavily on Amazon advertising than U.S. companies, boosting their sales, Glaser said.

Meanwhile, FTC rules say, “You must disclose country of origin information in … internet advertising … Product descriptions in these ads must include a statement that the product was made in the U.S.A., imported or both.”

A recent search on Amazon for “American flag” displayed a row of three ads, two of which were from G128 and did not disclose the country of origin. Jetlifee places similar ads with no disclosure.

Glaser said the FTC enforces tag regulations on clothes because it is a much larger industry, while enforcement in the flag industry has gone overlooked.

One Amazon reviewer who bought a VSVO product didn’t need lab testing or FTC disclosures to realize they’d been had.

“I bought one thinking it was made in the USA. When I received it, it clearly was not,” the customer wrote. “What a shame that they are defrauding the American public.”