“I have three months without a salary before I’m a member of Congress, so how do I get an apartment?” Ocasio-Cortez told The New York Times last week. “Those little things are very real.”

There are many little ways in which our electoral system isn’t even designed (nor prepared) for working-class people to lead.

The Fox News report shows that Ocasio-Cortez — a Democratic Socialist who ran to the left of and defeated long-term Democratic incumbent Joe Crowley in New York’s 14th Congressional District — “reported having between $15,001 and $50,000 in her checking account as of the end of April 2018, according to a Financial Disclosure Report she submitted to the clerk of the U.S. House of Representatives.” 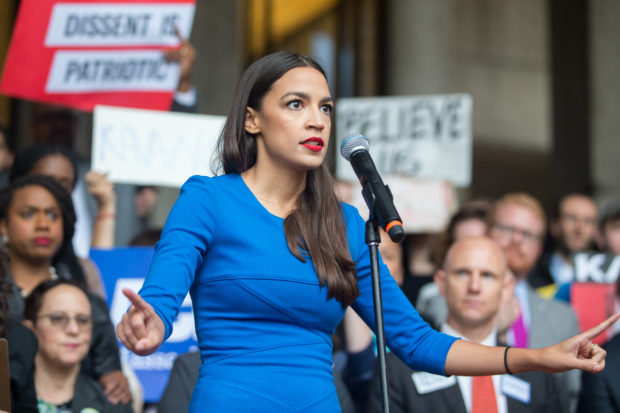 BOSTON, MA – OCTOBER 01: New York Democratic congressional candidate Alexandria Ocasio-Cortez speaks at a rally calling on Sen. Jeff Flake (R-AZ) to reject Judge Brett Kavanaugh’s nomination to the Supreme Court on October 1, 2018 in Boston, Massachusetts. Sen. Flake is scheduled to give a talk at the Forbes 30 under 30 event in Boston after recently calling for a one week pause in the confirmation process to give the FBI more time to investigate sexual assault allegations. (Photo by Scott Eisen/Getty Images)

Further, the incoming lawmaker has reportedly drawn $6,200 in salary from her campaign since August, the last reported withdrawal being $1,288.96 just three weeks before the election.

It’s certainly possible that Ocasio-Cortez spent the substantial amount of money she had on hand during the three months between April and when she began drawing from her campaign on necessary expenses. But if not, with a median rent of $2,700 in Washington D.C., housing shouldn’t be an issue between now and when she begins receiving her $174,000 annual salary next year.