One person was killed, and more than 100 others were injured, Saturday in France during a series of massive protests targeting President Emmanuel Macron’s recent decision to ratchet up gas taxes.

The protests come after the government moved to increase gas taxes, which is part of Macron’s strategy to wean France off oil and gas. But many French citizens see them as an example of the French president’s inability to understand the plight of the country’s working class.

The price of gas rose in January by 7.6 cents per liter in France and the price of diesel by 3.84 cents. To put that into perspective, 3.8 liters of fuel is equivalent to about 1 gallon of gasoline in the U.S.

Saturday’s demonstrations were unusual as none of them were sanctioned by the country’s powerful unions or politicians. The strife does not bode well for Macron, who’s approval rating is at dangerously low levels. 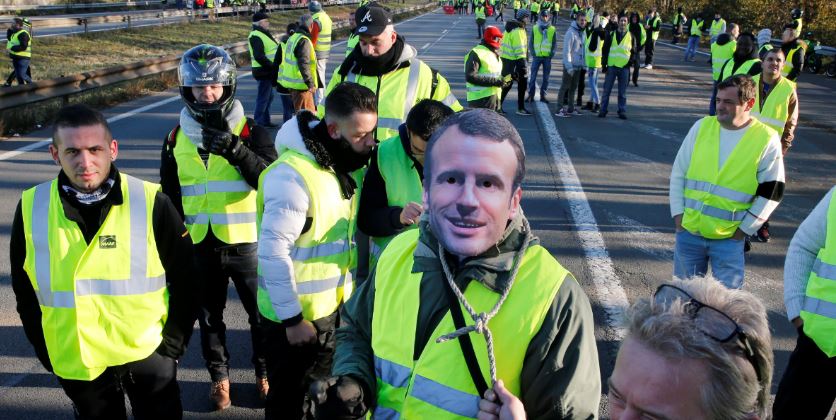 A man wears a mask with the likeness of French president Emmanuel Macron as people take part in the nationwide yellow vests demonstrations, a symbol of a French drivers’ protest against higher fuel prices, in Haulchin, France, Nov. 17, 2018. REUTERS/Pascal Rossignol

Yellow vest-wearing protesters shouted, “Macron must resign,” and gained supporters throughout the day, according to reports. One person, Robert Tichit, a retiree, referred to the president as “King Macron” and told reporters: “We’ve had enough of it. There are too many taxes in this country.”

Meanwhile, Europe is on the warpath against gas-powered vehicles. Denmark’s government presented a plan in October to ding all such vehicles by 2035. The plan is to curb vehicle pollution and combat climate change. (RELATED: Denmark Wants To Ban Gas-Powered Cars, Even Hybrids)

France has gone after the oil and gas industry. Macron issued a freeze on any new oil and gas leases in 2017 and intends to ban all oil and gas drilling by 2040. The protests come at a particularly dicey time for Macron, who is parried with U.S. President Donald Trump this month over the definition of nationalist.

Macron delivered a speech on Nov. 11 at the centennial ceremony honoring the end of World War I saying nationalism is the “betrayal of patriotism” and calling for a rejection of “selfishness of nations only looking after their own interests, because patriotism is exactly the opposite of nationalism.”